As the first firehouse built in 30 years, the City of Boston is investing $23.5 million into the new Engine 42, Rescue 2, District 9 building.

Mayor Martin J. Walsh, Boston Fire Commissioner John Dempsey and Boston Fire Department firefighters today celebrated the final beam raising on the first new firehouse built in the City of Boston in over 30 years. The construction of Engine 42, Rescue 2, District 9 Firehouse is a $23.5 million investment in the City of Boston's community and emergency services. The City of Boston Public Facilities Department (PFD), in collaboration with the Boston Fire Department (BFD), is working closely with Dore & Whittier Architects and Boston Building and Bridge on design and construction. The design focuses on both emergency response for the neighborhood and the health and wellness of firefighters.

"An investment in emergency services and first responders is an investment in the community and Boston's safety. Designing and building a firehouse that prioritizes the health, safety and wellbeing is exactly how we should give back to first responders who sacrifice their health and safety for us," said Mayor Walsh. "I want to thank Commissioner Dempsey and all the firefighters for their commitment to our city and residents."

This beam raising marks the completion of the structural steel installation, which started in October 2019, and the next step in the construction process. Now, construction will phase into installing masonry, which will enclose the building exterior, along with the roof and windows, making it watertight. Due to COVID-19, construction was paused for two months. 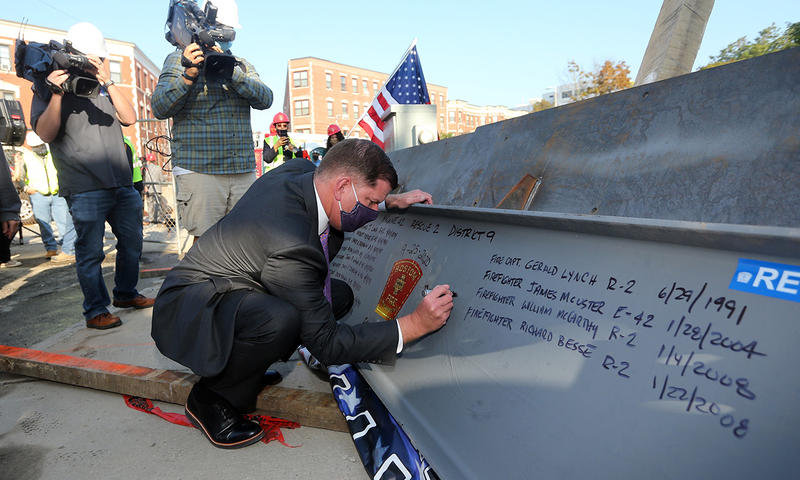 The priority for the new firehouse is the health and safety of Boston Fire Department firefighters. As part of the design and construction, the building minimizes particulate contaminants from traveling to the living quarters of the building. The new building will be broken into three zones (hot, warm and cold) to keep carcinogens from circulating throughout the house.

"It's been a long time since we've had a Mayor willing to invest in the safety, health, and wellness of our firefighters," said Fire Commissioner Dempsey. "This allows for optimal performance in our service to the residents of Boston. This new firehouse will keep our firefighters healthy for years to come."

The completed Engine 42, Rescue 2, District 9 firehouse will include:

Additionally, the City of Boston is commissioning an artist to create a long-term public artwork to complement the construction of the Engine 42 fire station. This project has a budget of $300,000, and is funded by the City's Percent for Art program, which commissions one percent of the City's capital borrowing for the creation of public art. $15.0 million has been allocated to this program over the next five years. The artwork at Engine 42 will be a site-specific, impactful, focal design feature that aims to enrich the connection between the Boston Fire Department and the surrounding Egleston and Roxbury communities. 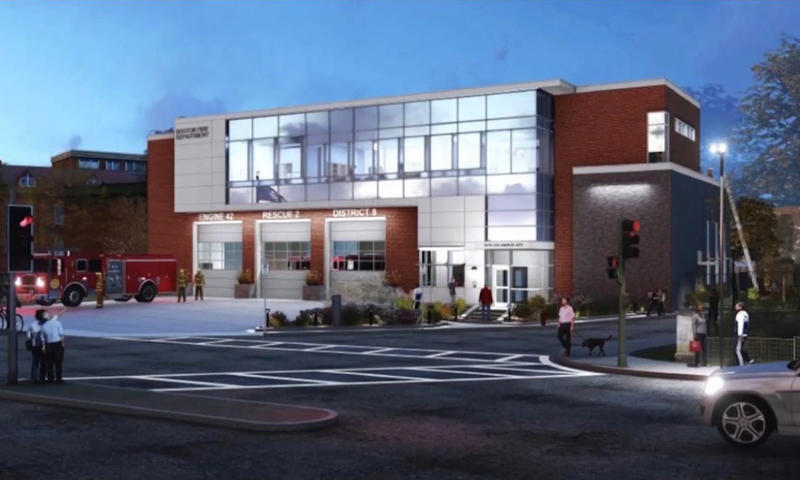 Mayor Walsh's FY21-25 Capital Plan includes other health and safety improvements to firehouse projects as a result of recent programming. Starting in FY16, the Fire Department, in conjunction with the Public Facilities Department, studied best practices for firehouse design. Key design changes include defined zones within the firehouse to prevent contamination of living areas, along with improved personal and gear cleaning facilities. The results of this planning are reflected in the projects to replace firehouses for Engine 42 in Roxbury and Engine 17 in Dorchester, at a total investment of $48 million. The firehouses for Engine 3 in the South End and Engine 37 on Huntington Avenue are also scheduled to be replaced.

The 2.5 story building is 23,000 square feet, replacing the previous single story, 6,400 square foot firehouse, which opened in 1952. As the firehouse is still under construction, operations have been reallocated to 121 Armory Street, which is 0.2 miles from the existing fire station.