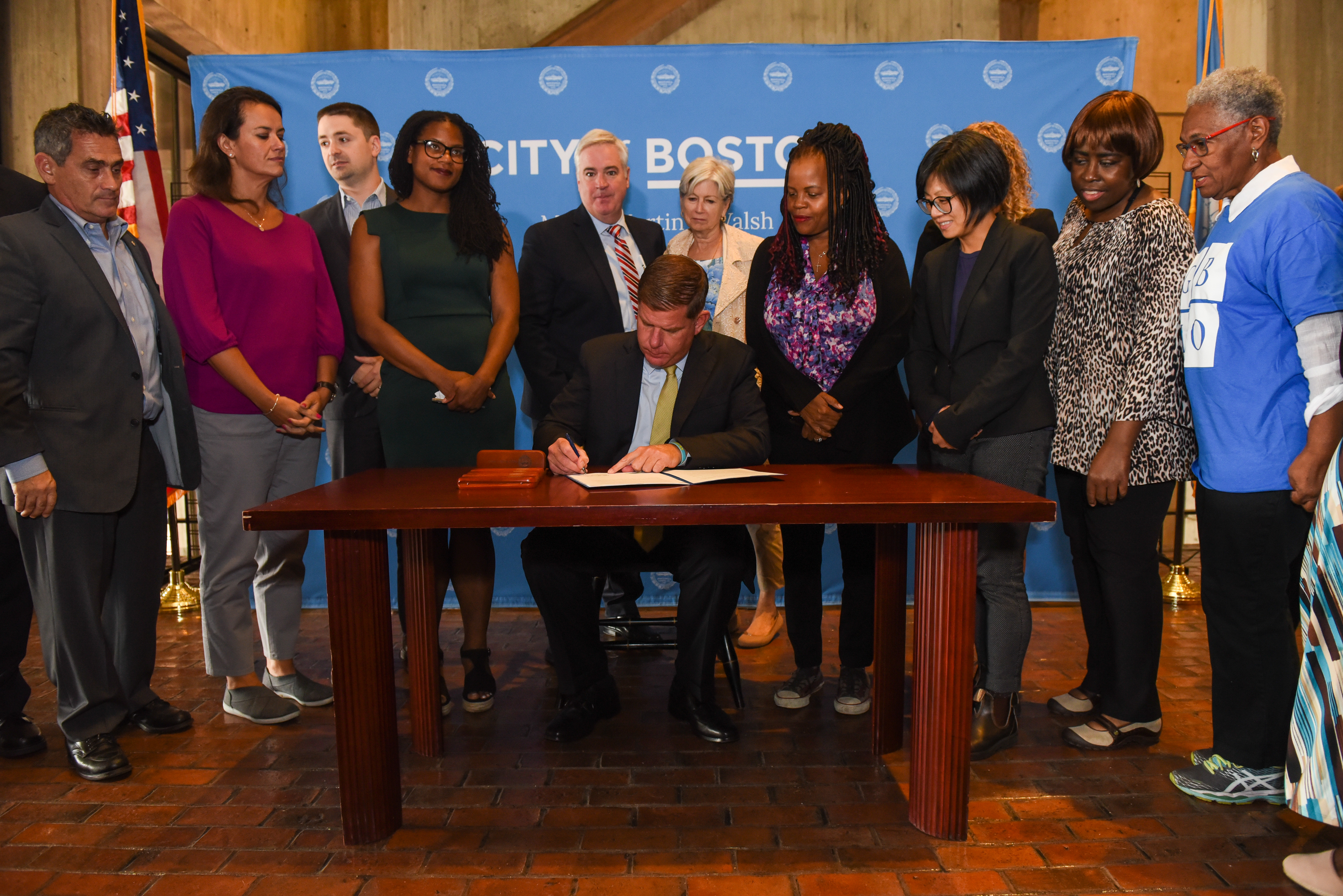 Mayor Martin J. Walsh today joined members of the Boston City Council, community residents and advocates as he signed "An Act to Further Leverage Commercial Development to Build Housing, Create Jobs, and Preserve Inclusionary Development." This Home Rule Petition enables the City of Boston to have more flexibility to fund affordable housing and workforce training through Boston's Linkage program, and will codify the Inclusionary Development Policy (IDP) into Boston's Zoning Code to protect the City's ability to create and fund income-restricted housing. Mayor Walsh proposed the Home Rule Petition in January 2019 as part of his 2019-2020 legislative package. Following the signing, the proposal will move to the Massachusetts Legislature for approval.

"We must use every tool we have to leverage Boston's growth to invest in affordable housing and workforce training for our residents," said Mayor Walsh. "I am proud to sign this legislation that addresses one of our most pressing issues in Boston: building more opportunities for all. I thank the City Council and many advocates for helping us take this critical step forward, and look forward to working with the Legislature to quickly move this bill into law."

Boston's Linkage program provides funding for affordable housing and workforce training through payments by large-scale commercial real estate development. Under the current law, the Boston Planning & Development Agency (BPDA) is only allowed to adjust Linkage every three years based on the Consumer Price Index (CPI). Currently, commercial developments over 100,000 square feet pay $10.81 per square foot for housing and jobs Linkage. The money collected is made available through competitive funding rounds administered by the Neighborhood Housing Trust and the City of Boston's Office of Workforce Development.

The Home Rule Petition signed today will allow Boston to make adjustments to the required payment and program guidelines, including annual adjustments, allowing for Linkage to be more closely aligned with the market and offering additional opportunities for the creation of affordable housing and workforce development.

Since 2014, the City has invested $43 million in housing funding from Linkage that it has leveraged for a total of $723 million in additional public funds across 66 developments. Those projects have created 1,546 new affordable units and preserved 749 existing affordable units. Between 2015 and 2016, Linkage helped more than 2,300 low- and moderate-income residents access job training and education programs. After job placement, graduates of the training programs earned an average wage of $15.23 per hour with 72 percent earning benefits as well.

"Housing our communities and preparing residents for economic prosperity are critical priorities for the City of Boston," said City Councilor Lydia Edwards. "This legislation will ensure Boston secures lasting affordability for those who live here today as we plan for growth and development in Boston neighborhoods."

"Throughout the legislative process, my City Council colleagues and I heard from a range of stakeholders who expressed how this Home Rule Petition would be a specific tool to address the housing crisis in Boston," said City Councilor Michael Flaherty. "This legislation will enable Boston to update the Linkage exaction rates on an annual basis to allow for the City to make adjustments based on the realities of the real estate market. Giving the City more flexibility and local control over the exaction rates is especially important so as we continue to go through an  era of rapid growth and development. I join Mayor Walsh and my Council colleagues in advocating to move this bill forward."

The bill will now be considered by the State Legislature. Representative Kevin Honan of Allston-Brighton and the Chair of the Joint Committee on Housing, will be filing the bill. Representative Honan said, “Linkage fees are a critical tool that help to ensure that the benefits of the city’s success are shared by everyone. As Chairman of the Joint Committee on Housing, I am thrilled to see the city’s continued commitment to affordable housing.”

The Home Rule Petition also codifies Boston's Inclusionary Development Policy (IDP) into the Boston Zoning Code. Under the current law, IDP requires that developers of buildings with 10 or more units seeking zoning relief or building on City of Boston owned land set aside a percentage of their on-site units as income-restricted, create off-site income-restricted units, or make a payment to the IDP fund. As the BPDA completes comprehensive planning in Boston's neighborhoods and updates Boston's existing zoning, more market rate residential projects may become as of right and be exempt from IDP requirements. The Home Rule Petition strengthens Boston's IDP as a strategy to capture affordable housing units and funding from projects which are zoning compliant, expanding the work under Mayor Walsh to create and preserve Boston's affordable housing.

"Workforce development and economic mobility go hand in hand in helping people achieve economic self-sufficiency," said Joanne Hilferty, President and CEO of Morgan Memorial Goodwill Industries, which operates MassHire Boston Career Center, and provides job training and career services for 7,500 individuals annually. "We applaud Mayor Walsh and the Boston City Council for their work on strengthening the Linkage Program to create more access to job training and career services for those who need it most."

Since the inception of IDP in 2000, the policy has resulted in 2,706 units of stable, income-restricted housing for moderate- and middle-income families, and $154 million in funding. When combined with other affordable housing resources, this funding has supported the completion or preservation of 2,006 additional units of housing, affordable to very low-, low-, and moderate-income households.

"It is important that the City continues to increase affordable housing options for Boston's households that are rent burdened," said Karen Chen, Executive Director of the Chinatown Progressive Association. "We need to do everything we can to ensure that our low-income residents can remain in their neighborhoods, near their jobs, schools and families. I want to thank the Mayor and the City Council for passing this important home-rule petition and commit that the IDP and Linkage coalitions will work hard to get this bill passed at the State."

The BPDA is currently working with outside consultants, the development community and housing and job advocates to explore policy changes to both Linkage and IDP beyond the legislative changes made in the Home Rule Petition.

The Mayor's commitment to increasing affordable housing in the City is reflected in Housing a Changing City: Boston 2030, Boston's latest  quarterly housing report, and the City's overall housing goal of 69,000 new units by 2030. These 69,000 new units include 15,820 new income-restricted units, which would elevate Boston's income-restricted inventory total to 70,000, or one in five of all housing units. In addition, the plan set a goal to preserve 85 percent of Boston's most at-risk privately-owned affordable units, and to purchase 1,000 units of rental housing stock from the speculative market and income-restrict them for perpetuity.

Mayor Walsh's legislative agenda continues his administration's work to create greater opportunity for all residents, and serves all people of Massachusetts through its focus on equity. The bills are grouped into different categories: housing security and economic mobility, environment and transportation, education, and health and public safety, and are aimed at ensuring Boston and Massachusetts' growth benefits all communities in the Commonwealth. For more information about the bills and to track the City's advocacy, please visit boston.gov/legislativeagenda.