The Mural Crew employed nearly triple the amount of youth for their ordinary summer program, with 27 youth participating in this year's program.

Mayor Martin J. Walsh, together with the Boston Parks Department and the Mayor's Office of Arts and Culture, today announced The Mayor's Mural Crew has completed its 29th summer of employing Boston high school students to create large-scale public art projects across Boston neighborhoods and City parks. In an effort to provide more Boston teenagers with a safe, in-person experience of working on meaningful projects amidst a global pandemic, the Mural Crew employed nearly triple the amount of youth for their ordinary summer program, with 27 youth participating in this year's program. This year's crew brought together teenagers representing 12 different local high schools, 10 neighborhoods, including teens who have dreamt of being a part of the program since coming across their first neighborhood mural as a kid.

"It has been a very challenging year for Boston, including our young people who are seeking support systems and community events," said Mayor Walsh. "I'm proud of every member of our Mural Crew who have worked incredibly hard this summer to bring their unique experience and vision to neighborhoods throughout our communities. To all the young people who rose to the challenge this summer and created positive engagement in our city: thank you."

Currently a program under the Boston Parks Department, The Mayor's Mural Crew started in 1991 as a summer initiative to cover graffiti with original murals painted and designed by local high school students. Over the course of the program, the Crew has employed and engaged hundreds of youth artists. Youth between the ages of 15 and 18 can apply to be a part of the Mural Crew through the City's  SuccessLink Employment Program.

Instead of the traditional summer experience of painting murals in neighborhood parks or small business walls, this year the Mayor's Mural Crew focused on a selection of street activism, painting, and placemaking projects. All projects took place outdoors and followed proper COVID-19 public health guidelines.

"As a team, we had to think outside of the literal box and create a summer work program of alternative learning, art-making, and skill-building-inspired by the times, and our city's parks," said Heidi Schork and Liz O'Brien, who co-lead The Mayor's Mural Crew program. "This summer, a consortium of City employees from the City's Parks Department, the Mayor's Office of Arts and Culture, and the Mayor's Office of New Urban Mechanics came together to create a curriculum that allowed teenagers to work in person." 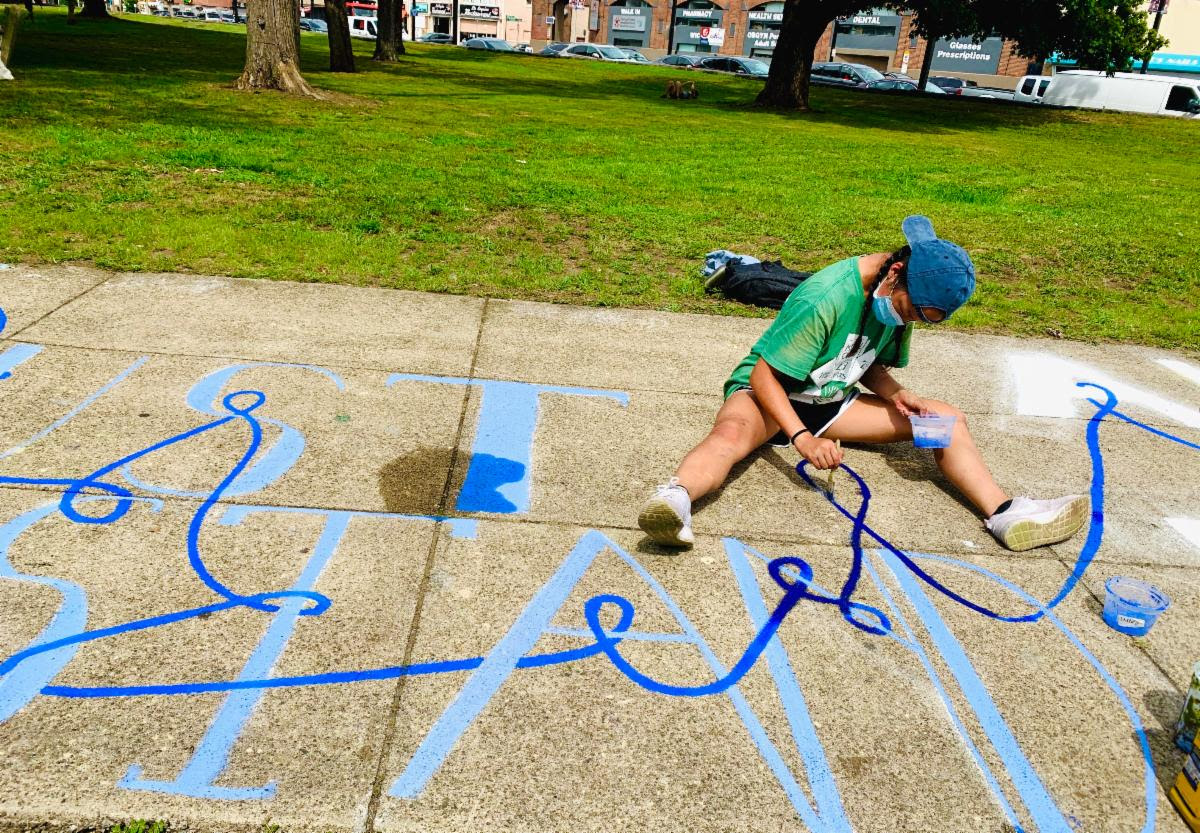 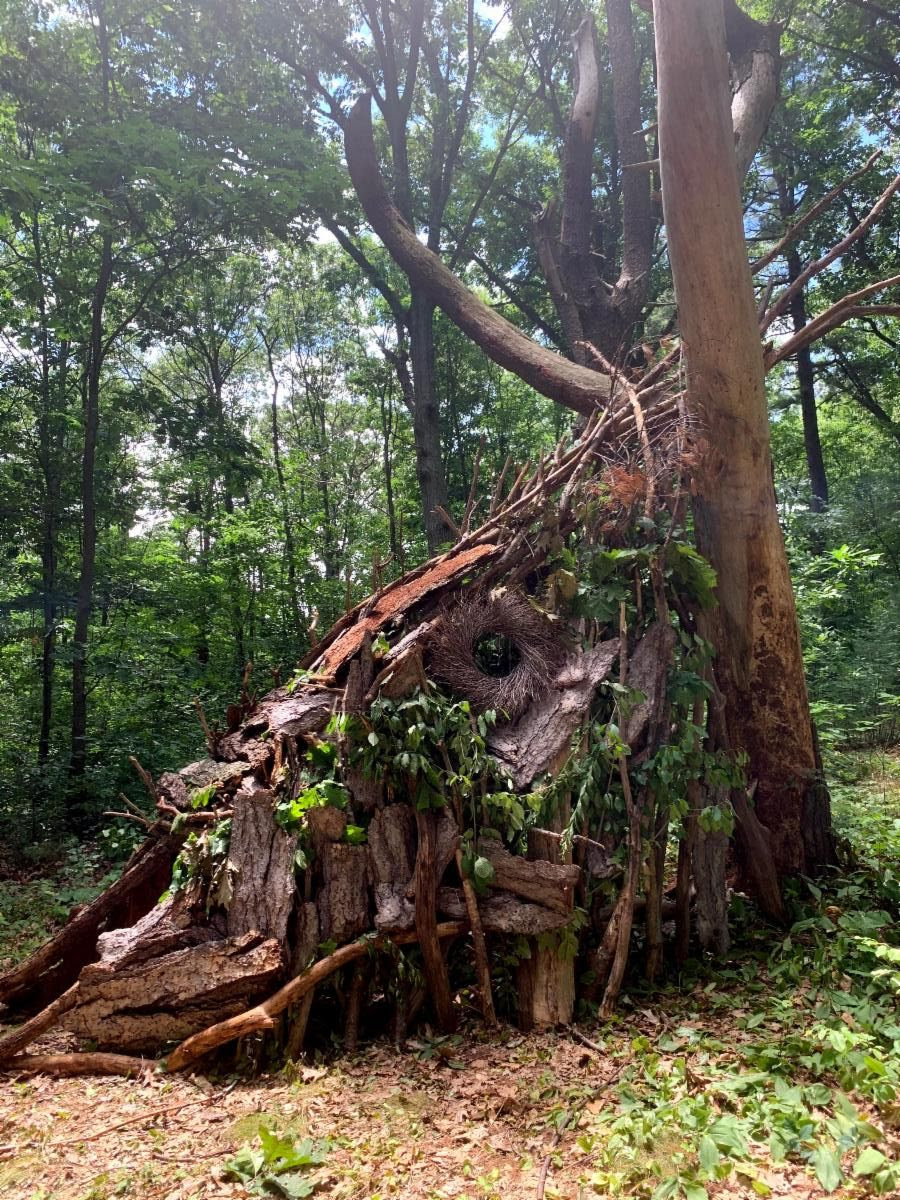 A deer head sculptural structure in the woods of Franklin Park built on July 21, 2020, led by youth artist Madalyn Spitz, of Roslindale. Photo courtesy of the City of Boston.

"Before joining The Mayor's Mural Crew, I was afraid creativity was a thing I would lose stuck in quarantine, but the crew taught me that art lies within everything- even a global pandemic," said Roslindale's Isabel Oalican, a rising sophomore Posse Scholar at Bryn Mawr College, who was new to the Mayor's Mural Crew this year. "Channeling how we felt about the reality of the pandemic into our work was fulfilling, in that it transformed mundane things into art, like our masks or a very spacious park that has room for keeping social distance. I hope that our work during the summer of 2020 serves as an example of how to remain positive and productive in tough times!"

"I had no idea what this summer was going to bring. I prayed that this job would work out because the people I meet are so down to earth and funny and human," said Jamaica Plain's Nina Porter, a rising senior at Meridian Academy, who just completed their second summer as a Mural Crew artist. "The diversity is incredible, and it seems like we are just bursting at the seams with suppressed creativity that quarantine has brought upon us. While this was unexpected, it was not unpleasant. I still get to be creative and make friends safely."

"This summer we got to make new forms of art in the woods that pushed our thoughts and conceptions of art, and allowed us to experience something new," said Jamaica Plain's Jon Lopez-Wilen, a junior studying illustration at Lesley University, who has worked with the Mural Crew since 2015. "We helped the Mayor's Office install socially-distant leaves, which got us out to explore a new territory and medium. Our masked self-portraits emphasize the importance of wearing a mask, while giving us each the chance to be self expressive."

"I felt so happy to be able to create artwork outside, on behalf of the City, during such an abnormal time," said Roslindale's Sayde Cheever, a rising sophomore at Boston Latin Academy.

"It was a really great chance to be creative with low stakes and lots of help from my supervisors and coworkers. We had to think outside the box to make art happen in the midst of COVID-19," said West Roxbury's Christy Jestin (this year's reigning champ of WGBH's High School Quiz Show), who begins his first year at Harvard College next week.