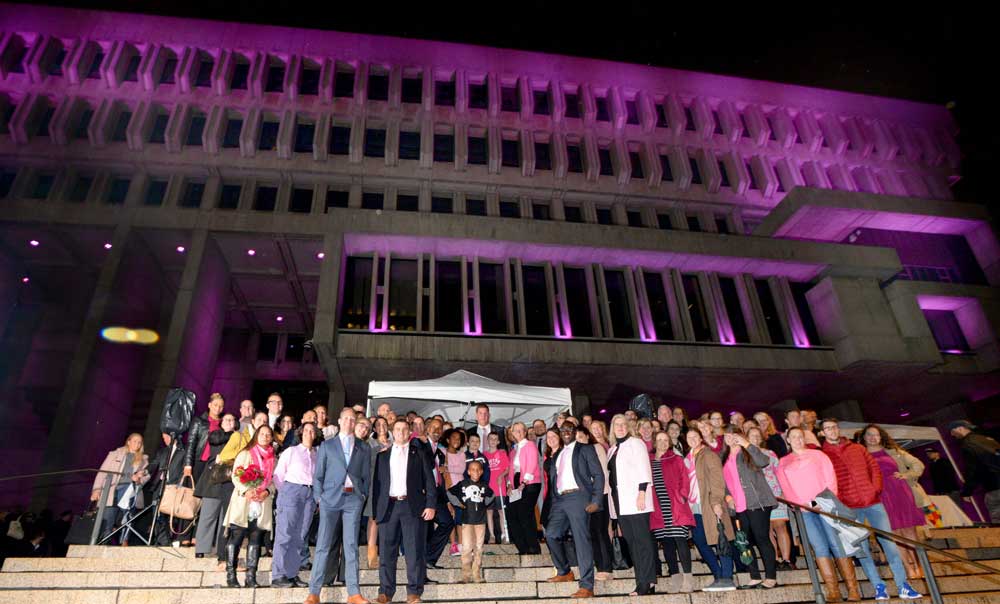 "I am proud that for the first time in its 48 year history, Boston City Hall is going to shine," said Mayor Walsh. "This state of the art lighting system will help make City Hall the civic heart of our city by livening up the plaza, while make the area safer and connecting us to Faneuil Hall and Quincy Market. Bringing new light to City Hall is symbolic of a more responsive vision here at City Hall, one that is meant to be engaging, inspiring, and serve as a beacon of the city and our values."

New high-efficiency LED fixtures have replaced the original exterior recessed lighting fixtures to illuminate the lower levels and highlight the entrances. The new fixtures wash the building in a warm white light, and also have the capability of projecting a wide-range of color options which will allow the City to light the building to acknowledge a variety of civic and celebratory events.

As part of tonight's unveiling, Mayor Walsh lit City Hall blue to serve as a reflection of the police officers injured in East Boston and pink in honor of Breast Cancer Awareness Month. Across the city, these lights were joined in being lit pink by those on the Zakim Bridge; the TD Garden; the Prudential Center; the Rose Kennedy Greenway; Atlantic Wharf and Rowes Wharf; the Dorchester gas tank; UMass Boston, the Bolling Building in Dudley Square; the Fallon Building on the South Boston waterfront; and Government Center T Station.

Watch the lights in action

More details on the lights

"Light is a metaphor for many things — energy, transparency, understanding — and light is necessary for growth and evolution," said Greg Galer, Executive Director of the Boston Preservation Alliance. "Bringing new light to City Hall is symbolic of not just a change in attitude of this important piece of architecture but as a sign of a new life for City Hall and the plaza. We know this project is the first step to make City Hall a civic centerpiece cherished by the residents of Boston and our visitors. We thank Mayor Walsh for bringing a new perspective, a new light, to City Hall."

The new exterior lighting improves security lighting, and allows for the floodlights and associated conduit added to the building over the years to be removed in its entirety. The lighting is utilizing energy efficient equipment to help meet the city's sustainability goals, replacing the existing Metal Halide fixtures with LED technology that has a 20 year life span. The current fixtures have a four year life span and have never been replaced.

"By illuminating its iconic and bold form, City Hall's interaction with Boston's urban fabric may be reinvigorated," said David Eisen FAIA, Boston Society of Architects/AIA (BSA) Vice President for Communications. "It's a decisive step toward transforming one of the most internationally renowned buildings that make up our distinct architectural heritage."

The new fixtures are also more energy efficient than the Metal Halide fixtures and the existing Flood Lights. Cost savings are expected to be in the range of 300,000 kWh saved per year.

Arcade lights have also been retrofitted to complement the City Hall lighting. Both will be operated by the same controller and will be able to be coordinated. The lighting is very flexible, so future building or plaza renovations can utilize the new lighting.

"It is wonderful that the City is taking this opportunity to recreate its own home place - City Hall - as the keystone and central event in an ongoing pursuit of improved illumination for our city," said Todd Lee, President of LIGHT Boston. "Mayor Walsh and his administration's strong support for using lighting to make our city even more dramatic, accessible, safe and a desirable place to be for both residents and visitors is noteworthy."

The exterior lighting installation is one of several ongoing initiatives to activate City Hall and City Hall plaza and make it more inviting and welcoming for residents. In September, Mayor Walsh announced that a contract was signed with Boston Garden Development Corporation as the vendor to enhance City Hall Plaza. Last year, Mayor Walsh launched RethinkCityHall.org and selected Utile to partner with the City on a City Hall campus plan study, a one-year comprehensive planning process that will serve as a roadmap for the operation and design improvements to City Hall and the plaza.