At her first bill signing, Mayor Michelle Wu today signed an ordinance requiring the City of Boston to divest from fossil fuel, tobacco, and private prison industries by the end of 2025. The ordinance, co-sponsored by then-Councilor Wu, Councilor Edwards and Councilor O’Malley, was unanimously approved by the Boston City Council last week with the goal of growing a low-carbon, resource efficient, and socially inclusive economy. The ordinance also requires a report to track City investments that includes plans to improve its holdings 120 days after passage. 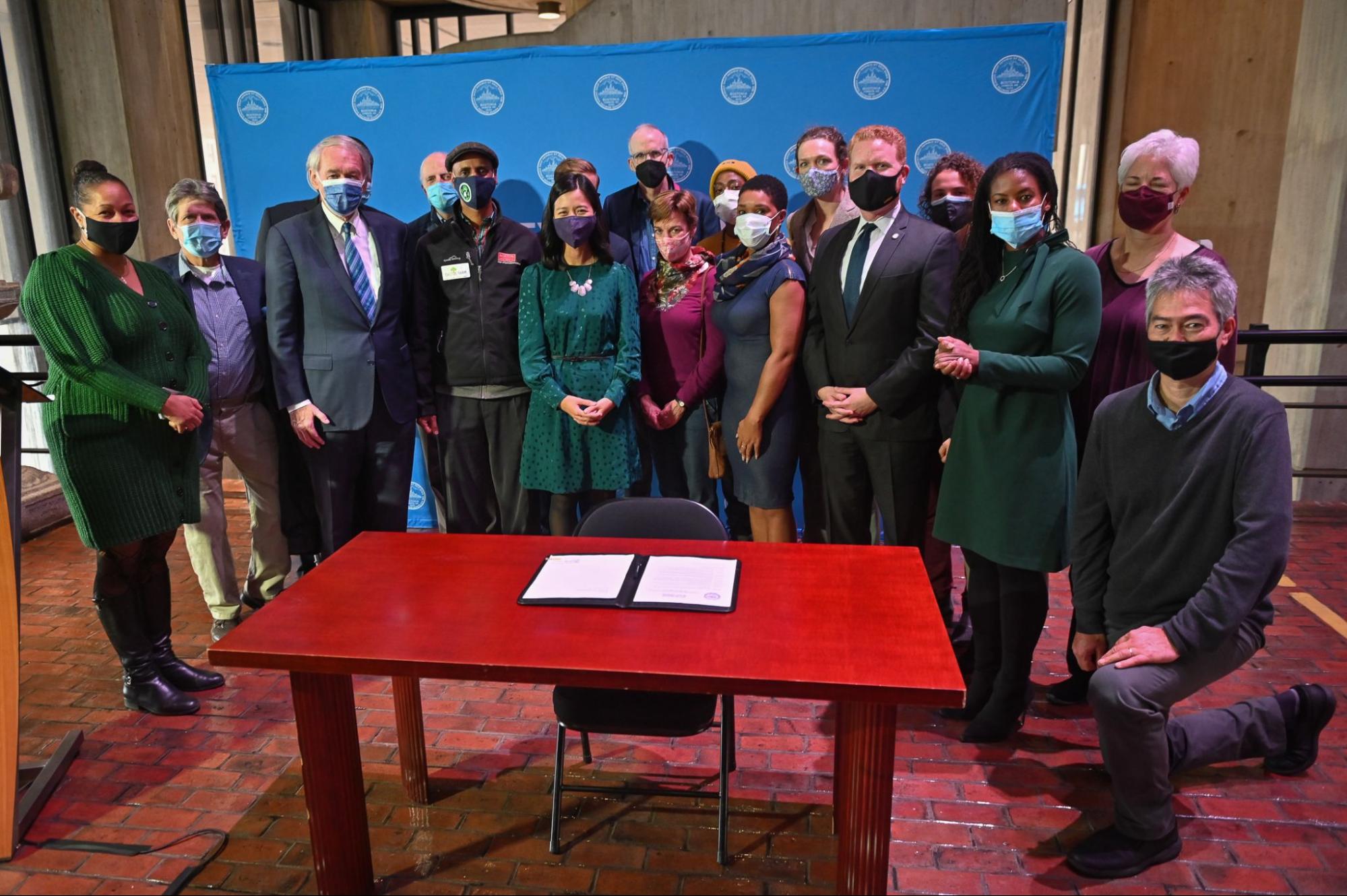 Today's signing is the culmination of Mayor Wu's years of commitment to reducing carbon, making advancements to shift to renewable energy, and prioritizing the stability of Boston's future for years to come. In 2014, Mayor Wu and Councilor O’Malley presided over the City Council hearing that examined the potential effects of fossil fuel divestment and its relation to Boston’s economy. Mayor Wu also provided testimony at the state in support of city/state divestment from fossil fuels.

“In this closing window of time to act, Boston must lead by taking every possible step for climate justice. Divesting from harmful industries to invest in sustainable and healthy jobs is not only the pathway to a green and resilient future; it’s also the most responsible stewardship of taxpayer dollars,” said Mayor Michelle Wu. “I’m thankful to the many advocates who fought for this important win and am so proud to take a big step forward towards a Boston Green New Deal today. Together, we are putting Boston on a path towards a healthier, brighter future.”

“The City of Boston continues to lead on environmental, economic and social justice issues. With the signing of this ordinance, we are headed another step closer toward a more resilient city,” said Councilor O’Malley. “Through codifying our values through this ordinance, we are demonstrating our commitment to addressing global climate change and its impacts on our city for future generations to come.”

"I was proud to partner with Mayor Wu on the council to file this ordinance and I'm even prouder that it's the first one she's signing as mayor,” said Councilor Edwards. “I'm also grateful for Councilor O'Malley's partnership and for all of the advocates that helped push us to take this important step toward a cleaner, more sustainable future."

“This piece of legislation sends a strong signal of where Boston stands in our fight against the climate crisis and the prison industrial complex, and where we are headed in our shared future,” said Reverend Mariama White-Hammond, Chief of Environment, Energy and Open Space. “I want to thank Mayor Wu, Councilor Edwards, Councilor O’Malley, and all of the residents and activists for taking this major step towards racial justice and a just transition to the green economy.”

Boston joins a divestment movement that includes a growing number of municipalities, universities, and private investment funds worldwide. As a Council member, Mayor Wu joined students and activists in filing a complaint with the Massachusetts Attorney General that states Harvard College's investment in fossil fuels goes against the state's Uniform Prudent Management of Institutional Funds Act. Colleges, universities, and municipalities across the Commonwealth of Massachusetts, as well as Maine, New York, and Quebec, have all led successful divestment campaigns showing that investing in renewable energy can be more profitable and create more jobs than investing in the fossil fuel industry. The City of Boston passed a similar divestment ordinance in 1984 as part of the global anti-apartheid movement.

"Michelle Wu is clearly intent on becoming a transformative mayor for the climate era, and this is a powerful first step--breaking with the fossil-fueled (and money-losing) status quo. Divestment has become a key part of the fight for a working future, and Boston's action today, coming as it does from a center of financial and scientific power, sends a signal that will be heard loud and clear across the country and around the world,” said Bill McKibben, founder of 350.org and Schumann Distinguished Scholar in Environmental Studies at Middlebury College.

This ordinance builds on Mayor Wu’s work to create an accessible, inclusive green economy that works for all of Boston’s residents. Last week, on her first full day in office, Mayor Wu filed an appropriation order with the City Council for $8 million in federal funds to eliminate fares on the 23, 28 and 29 MBTA bus routes for a two-year period. This program builds on the 4-month fare-free 28 bus pilot program initiated by former Mayor Janey. While overall bus and subway ridership is at 53% of pre-pandemic weekday ridership, the free 28 bus saw ridership surge to 92% of pre-pandemic levels, making it the most popular in the system.