The new energy efficient school building is currently under construction in Fenway. 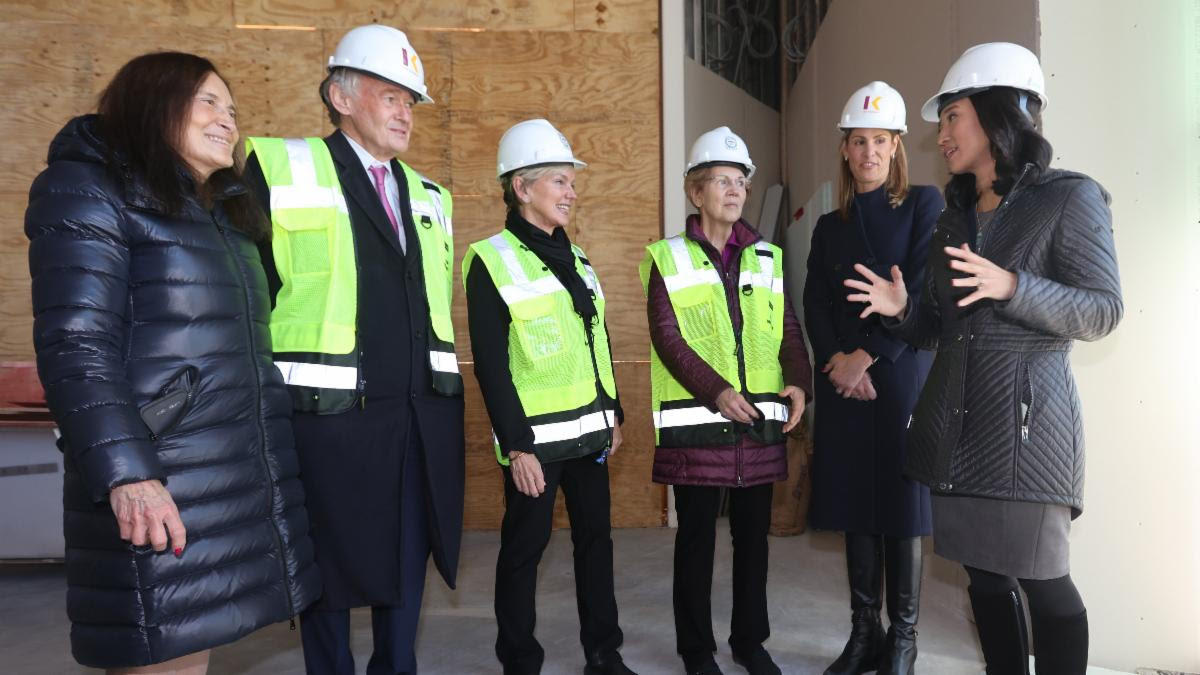 Friday, Mayor Michelle Wu joined U.S. Secretary of Energy Jennifer Granholm, U.S. Senator Ed Markey, U.S. Senator Elizabeth Warren, and other elected officials to tour the Boston Arts Academy as part of Secretary Granholm’s Build Back Better Tour. The Boston Arts Academy is Boston’s only public high school for the visual and performing arts. The new building, which is currently under construction, has been designed to meet the City's carbon neutrality goals.

President Biden’s Build Back Better framework is the largest effort to combat climate change in American history. Friday’s tour and the City’s overall environmental partnership with the Biden administration exemplifies Boston’s commitment to being a New Green Deal city.

“Building back better requires urgent action at every level of government to combat climate change, create jobs, and invest in our future,” said Mayor Wu. “I was excited to welcome Secretary Granholm to the Boston Arts Academy to highlight what’s possible in our cities with state and federal partnership.”

Build Back Better has the potential to significantly support our city’s efforts to be resilient against climate change while supporting a just transition to the green economy. Accomplishments like the recently passed Infrastructure Bill provide critical support to enable Boston to move forward with public transportation investments, power grid infrastructure, and energy efficiency.

"The Boston Arts Academy’s new facility is a perfect example of building back better and paving the way toward a more energy efficient, sustainable and lower-cost future-- mirroring Mayor Wu’s bold climate goals and the historic weatherization investments in the Bipartisan Infrastructure Law," said Secretary Jennifer M. Granholm. "From those tasked with bringing this building to life to the students who will learn and grow there, this proactive investment will benefit all Boston residents for generations to come."

“The City of Boston is immensely grateful to have a partner in Washington that is committed to combating the climate crisis,” said Reverend Mariama White-Hammond, Chief of Environment, Energy and Open Space. “As we continue on a path towards carbon neutrality, it is crucial that we partner with all levels of government to find innovative solutions to our most pressing challenges. This is a really exciting moment for the just transition movement.”

The state of the art building features a highly efficient air source heating and cooling system as well as energy efficient LED lighting systems. To mitigate the climate crisis, the City of Boston will need to implement similar measures throughout all of our new construction. The Department of Energy recently partnered with the heating industry to improve performance and efficiency of cold climate heat pumps as a part of the Build Back Better framework.

The Boston Arts Academy building will be 100 percent electric (except for gas in science labs and the kitchen). It is expected to be open for students for the 2022-2023 school year. It will accommodate more than 500 students, an increase of nearly 15 percent from the current student body.

“Boston has a long tradition of cultivating innovative ideas through education, the arts and culture sector and in environmental leadership,” said Boston Public Schools Superintendent Brenda Cassellius. "All BPS students deserve to learn and grow in beautiful, state-of-the-art facilities. This one-of-a-kind campus is an example of one of the sustainable facilities needed across our city so that all our children have the opportunity to thrive in joyful and environmentally sound learning environments. I look forward to the official grand opening of BAA, which will house some of Boston’s most creative talent within a facility that is better for our communities.”

This energy efficient project builds on the City’s work toward sustainable growth and embodying a Green New Deal City. In Mayor Wu’s first week as Mayor, she signed a historic ordinance requiring Boston to divest from fossil fuel industries by the end of 2025.

Mayor Wu recently took steps to expand accessibility to public transportation, notably the 23, 28, and 29 MBTA bus routes. Mayor Wu filed an order to allocate $8 million in federal funds to eliminate fares, a motion that has since gotten approval from the Boston City Council.

In October, the Boston City Council unanimously passed the Building Emissions Reduction and Disclosure Ordinance. This building performance standard helps put Boston on a path to achieve carbon neutrality by 2050.