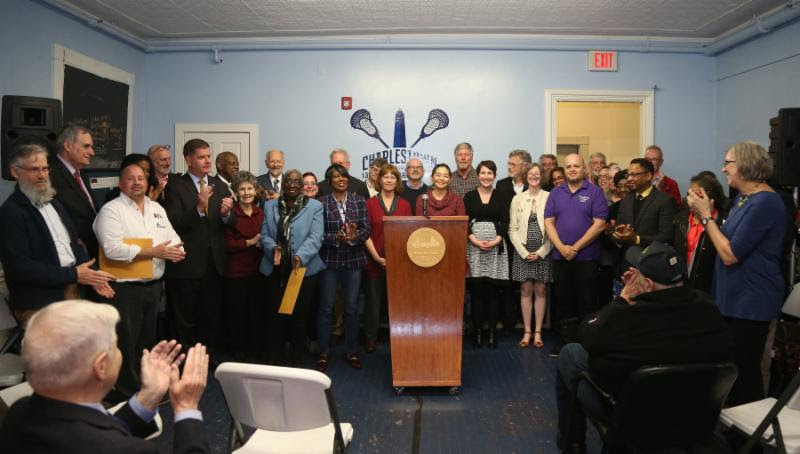 "In Boston, we are proud to be a city of history. When people around the world read about American history, they read about Boston," said Mayor Walsh. "Preserving history is not shutting it away somewhere, it's investing in the heart of a community. The three components of the Community Preservation Act --  affordable housing, open space, and historic preservation -- connect the past, present, and future of a community. In every one of those projects, we see not only history restored, but communities strengthened."

"Through investment, policy, and collective will we can maintain the walkable, human-scaled streetscapes that define our neighborhoods, give us a sense of place and identity, and draw millions of visitors, residents, and businesses to our city," said Alison Frazee, assistant director of the Boston Preservation Alliance. "The Community Preservation Act makes this work possible. As the first and only major funding source for historic preservation in the city, we are thrilled to see money going in the door of transformational projects like Memorial Hall."

"Thanks to Mayor Walsh and the Community Preservation Committee, we will be able to return Memorial Hall to its former glory and continue to serve the veterans of Charlestown and our community," said Joseph Zuffante, president, Abraham Lincoln Post 11 of the Grand Army of the Republic.

Included in Mayor Walsh's 2019 legislative agenda is "An Act to Sustain Community Preservation Revenue (H. 2463/S.1618)," filed by Representative Ann-Margaret Ferrante and Senator Cynthia Stone Creem. The bill would adjust the surcharge on fees for recording deeds to increase the State CPA match, protecting the Act that more than 170 cities and towns depend on for the creation of affordable housing, open space, and historic preservation. When municipalities voted to enact CPA, they did so with the promise of a substantial state match. This year, the match was just 19 percent, meaning that the CPA bill people voted for is no longer the same bill. The Massachusetts House of Representatives' proposed FY20 budget includes a meaningful increase in the State's CPA match. Mayor Walsh will continue to advocate for this needed investment throughout the state budget process.

The following is a complete list of historic preservations projects awarded funds from the Community Preservation Fund in its first year: