BOSTON - Friday, July 19, 2019 - Mayor Martin J. Walsh yesterday announced the City of Boston has finalized details for an enhanced mortgage program for first-time homebuyers. This project represents the culmination of efforts by Mayor Walsh's Barriers to Homeownership Working Group, which works to create more homeownership opportunities for low- and middle-income families and families of color. The ONE+Boston mortgage product will be offered by the Massachusetts Housing Partnership (MHP) and was supported by the Massachusetts Affordable Housing Alliance (MAHA) and Greater Boston Interfaith Organization (GBIO), long-time advocates for innovative and creative programs that address need and remove barriers.

"The ONE+Boston Mortgage will expand the purchasing power for Bostonians interested in becoming first-time homebuyers. This is a great use of Community Preservation funds and an investment in Boston's future that strengthens homeownership and gives residents a chance to buy a home in the neighborhoods they love," said Mayor Walsh. "I commend the Barriers to Homeownership Working Group, MAHA and GBIO for their leadership and advocacy in creating this product, and thank MHP and the participating lenders for their partnership and commitment to innovation in the mortgage marketplace." 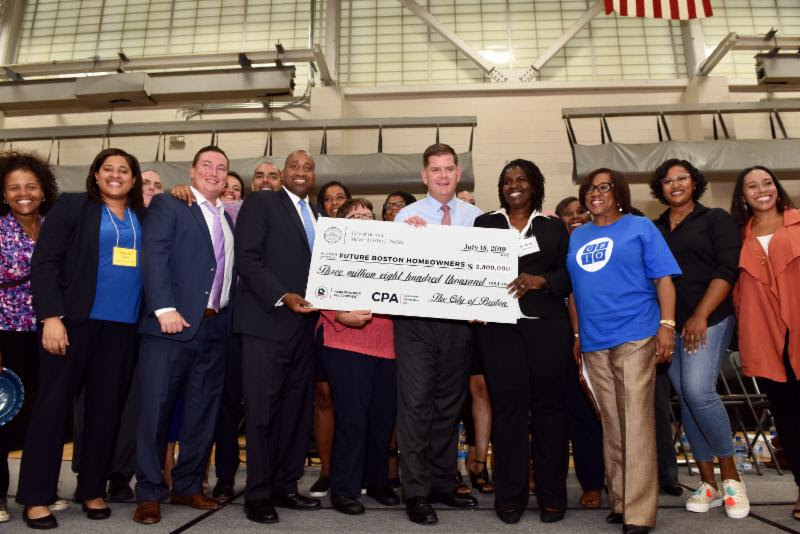 The new ONE+Boston mortgage will utilize $3.8 million in Community Preservation funds previously announced this spring. These City of Boston funds generated from the Community Preservation Act will finance a permanent reduction in the interest rate of a 30-year fixed-rate mortgage for income-eligible Bostonians buying their first home within the city limits. This interest-rate reduction means the new homebuyer could afford a larger mortgage at a monthly payment that is still affordable to them, and ultimately, translates into more buying power for the new homebuyer.

"Our homebuyer graduates need good news and this new program certainly qualifies," said Symone Crawford, Mattapan resident and director of Homeownership Education at MAHA. "We are thrilled to be partnering with Mayor Walsh and his housing team, MHP, and participating lenders to assist more first-time homebuyers in Boston's neighborhoods. For nearly 30 years, ONE Mortgage has done more to close the racial homeownership gap, and with this important enhancement, we can do even more."

ONE+Boston will enhance Massachusetts Housing Partnership's (MHP's) ONE Mortgage Program for first-time homebuyers earning less than 100% of Area Median Income (AMI), or $90,000 for a two-person household, to permanently buy-down interest rates. This interest rate write down may be combined with additional financial assistance from the City of Boston through the Boston Home Center. Homes purchased through this mortgage product may be market-rate, or income-restricted. The total amount a borrower can receive between the write down and BHC downpayment/closing cost assistance is $50,000.

"Thanks to the City of Boston's leadership, ONE+Boston will substantially expand the impact of the ONE Mortgage Program, which has enjoyed strong support from the Baker-Polito administration and has helped more than 5,000 families become successful first-time homeowners in the City of Boston," said Clark Ziegler, executive director of the Massachusetts Housing Partnership (MHP), the quasi-public organization that helped create and administers ONE Mortgage.

"The ONE Mortgage Program has been an incredibly impactful lending program for the community, empowering thousands of Massachusetts residents to purchase a place to call home," said Nancy Monbouquette, Vice President and Home Mortgage New England regional manager at Citizens Bank, a ONE+Boston participating lender. "We are pleased to continue working with such outstanding organizations like the City of Boston, Massachusetts Housing Partnership and Massachusetts Affordable Housing Alliance. Through these partnerships and this innovative expansion of the ONE Mortgage Program, we will be able to help even more Bostonians reach their homeownership goals."

The ONE+Boston mortgage product will be available at Citizens Bank, the City of Boston Credit Union, Eastern Bank, Rockland Trust, Boston Private Bank, Cambridge Trust, and Santander Bank beginning this fall. These seven lenders are the top current ONE lenders in Boston, and routinely work with Boston Home Center first-time homebuyers, often utilizing MHP's ONE Mortgage. The demonstration project will likely be scaled up to include other lenders in the future.

ABOUT HOUSING A CHANGING CITY: BOSTON 2030

In 2018, Mayor Martin J. Walsh updated his comprehensive housing strategy,  Housing A Changing City: Boston 2030 to increase the City's overall housing goal to 69,000 new units by 2030, to meet Boston's faster than expected population growth. These 69,000 new units include 15,820 new income-restricted units, which would elevate Boston's income-restricted inventory total to 70,000, or one in five of all housing units. In addition, the 2018 Update set a goal to preserve 85 percent of Boston's most at-risk privately-owned affordable units, to purchase 1,000 units of rental housing stock from the speculative market and income-restrict it for perpetuity, and to help 5,000 Bostonians become first time homebuyers.

ABOUT THE COMMUNITY PRESERVATION ACT (CPA)