Boston is the first city in the United States to formally prioritize diverse applicants who are looking to participate in the marijuana industry.

Mayor Martin J. Walsh today joined Councilor Kim Janey and members of the Boston City Council as he signed "An Ordinance Establishing Equitable Regulation of the Cannabis Industry in the City of Boston." The ordinance is the result of collaboration from many stakeholders, and makes Boston a model for how to create a system that fosters racial equity and inclusion in the new marijuana industry and ensures benefit to all the City's communities. With this ordinance, Boston is the first city in the United States to formally prioritize diverse applicants who are looking to participate in the marijuana industry. 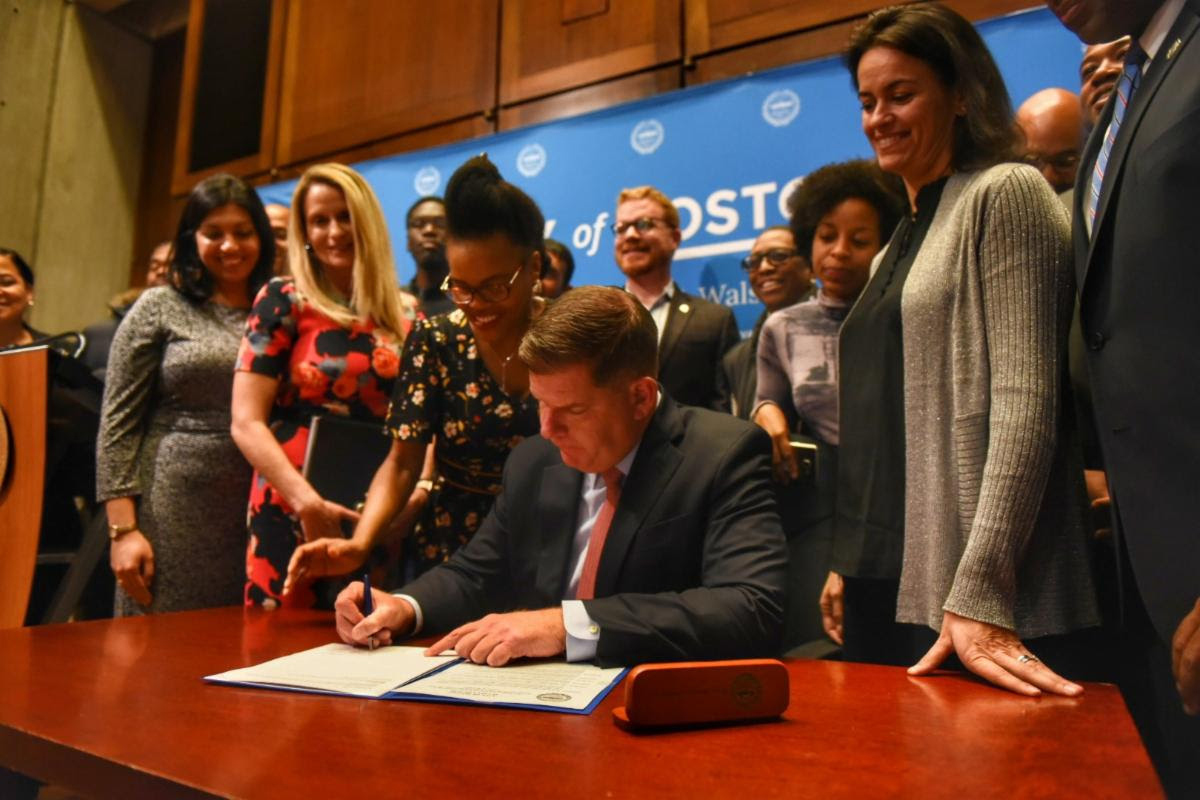 "This ordinance ensures those who have been impacted hardest by the War on Drugs will benefit most from this economic opportunity." said Mayor Walsh. "I am proud to sign this legislation that will increase transparency and accountability, and support diverse and local ownership in this new industry. I want to thank Councilor Kim Janey for her collaboration throughout this process and I look forward to continuing our partnership that is creating bold progress and change as the cannabis industry grows in Boston."

The Walsh Administration has prioritized equity since the beginning of this new industry, and has approved 14 host community agreements in 10 different neighborhoods with marijuana businesses seeking to open in the City of Boston, which includes three state-certified empowerment candidates. Boston was the first city in the state to sign an agreement with an economic empowerment state-approved applicant, representing the city's national leadership in creating racial diversity in the cannabis industry.

"Together, we are taking a major step forward in creating a process that promotes equity, clarity, transparency, and accountability. And one that prioritizes small, local companies with diverse ownership from communities disproportionately impacted by the war on drugs," said Councilor Kim Janey. "I want to thank Mayor Walsh for his commitment to creating a fair and equitable process and I look forward to working with him, my colleagues on the Council, and the many advocates and entrepreneurs, as this new industry rolls out in our city."

The ordinance defines the criteria that qualifies an applicant to be an "equity applicant" based on the majority of its ownership and gives preference to people who reside in areas impacted hardest by the war on drugs, Boston residents, people of color, and people with low incomes, among others. Based on this, the City will maintain an equal or greater number of equity applicant licensees to licensees that do not qualify as equity applicants.

The ordinance also establishes a new Boston Cannabis Equity Program to support equity applicants throughout the process of establishing a cannabis business. The program will offer technical assistance related to business operations, workforce development, legal compliance and other best practices to ensure a successful business plan.

In addition, the ordinance establishes the Boston Equity Fund to administer and support the Equity Program. This fund will make resources and technical assistance available for equity applicants and licensees to establish and operate a cannabis business in the City of Boston. The Mayor will also establish a Boston Cannabis Board, an independent board charged with reviewing all applicants for a marijuana license.

Other important pieces of the legislation include an online registry for applicants and licensees with information about their existing or proposed establishment and a map of proposed applications and for residents to access and to ensure businesses are good neighbors in our communities.

The City has been accepting applications to establish marijuana businesses following its legalization and has conducted an extensive community engagement process for proposals. After signing host community agreements with the City of Boston, businesses go through the State's Cannabis Control Commission process, which ultimately approves businesses. To date, two medical marijuana sites are open for business and two recreational sites have passed the state approval process and are making preparations for their respective openings. Boston's first recreational marijuana business is expected to open before the end of the year.

In an effort to bring further transparency to the industry and remove any potential conflicts of interest, in September, Mayor Walsh signed an executive order that prohibits City of Boston employees of their immediate family members from participating in a marijuana business that is currently seeking, or intends to seek approval from the City of Boston or its agencies.

You can learn more online about the process involved in setting up a marijuana business in the City of Boston.