Fifty posters will go up throughout the City to illustrate how bystanders can address Islamophobia.

Mayor Martin J. Walsh today launched a citywide public service announcement throughout Boston to raise awareness of how bystanders can address public harassment and Islamophobia. Starting today, over the next two weeks 50 posters will be placed throughout Boston on public furniture, such as bus rest stops. The posters provide a step-by-step guide to diffusing situations where an individual may be facing Islamophobia, or any other type of harassment.

"These posters are one tool we have to send the message that all are welcome in Boston," said Mayor Walsh. "Education is key to fighting intolerance, and these posters share a simple strategy for engaging with those around you." 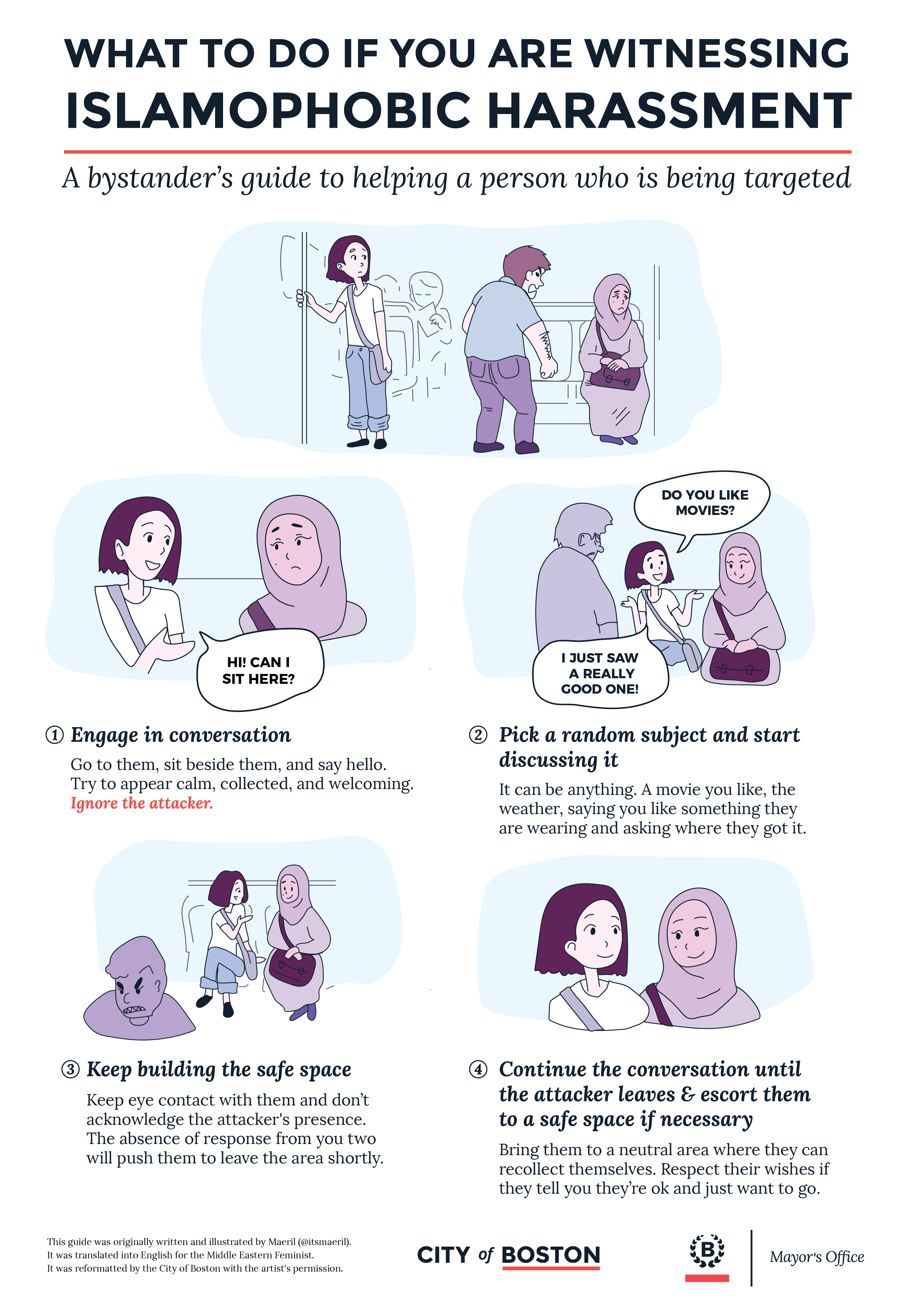 The posters were designed by an artist, Maeril, in Paris after November of 2015, and gained popularity online. The posters, designed as a cartoon, encourage bystanders to engage with those who are being targeted because of their appearance or beliefs, engaging victims in conversation to draw attention away from the harasser. The technique described in the cartoon is called "non-complementary behavior," which disempowers the attacker by countering their expectations.

"This initiative couldn't come at a better time," said Suzan El-Rayess, Civic Engagement Director at the Islamic Society of Boston Cultural Center. "We encourage all of our fellow Bostonians to apply the approach in these posters to anyone targeted -- whether Muslim, Latino or otherwise. The posters are yet another sign that our Mayor and his administration envision a city welcoming to all community members. We are proud of our Mayor and our city."

The Mayor's Office was approached by Thea Colman, whose sister had worked with San Francisco's Bay Area Rapid Transit (BART) to have versions of the poster installed throughout their system. Working with Coleman, the Mayor's office approached Maeril, the artist, to adapt her design for use in Boston.

"This campaign is designed to encourage de-escalation, offering a peaceful way to address harassment that bystanders may witness in public," said Faisa Sharif, Boston's South End, Bay Village liaison and City-wide Somali Neighborhood Services liaison within the Mayor's Civic Engagement Cabinet. "This is a proactive, inclusive strategy anyone can use if they see harassment around them, and is another way Boston supports an inclusive city that welcomes each and every person.