Notes from the Archives: The Dragon on Washington Street

While cataloging Public Works Department photographs at the City Archives, intern Alyssa True noticed this dragon on the wall of a Washington Building. Intrigued, she began to investigate.

Take a close look at this photo. See that dragon on the wall? 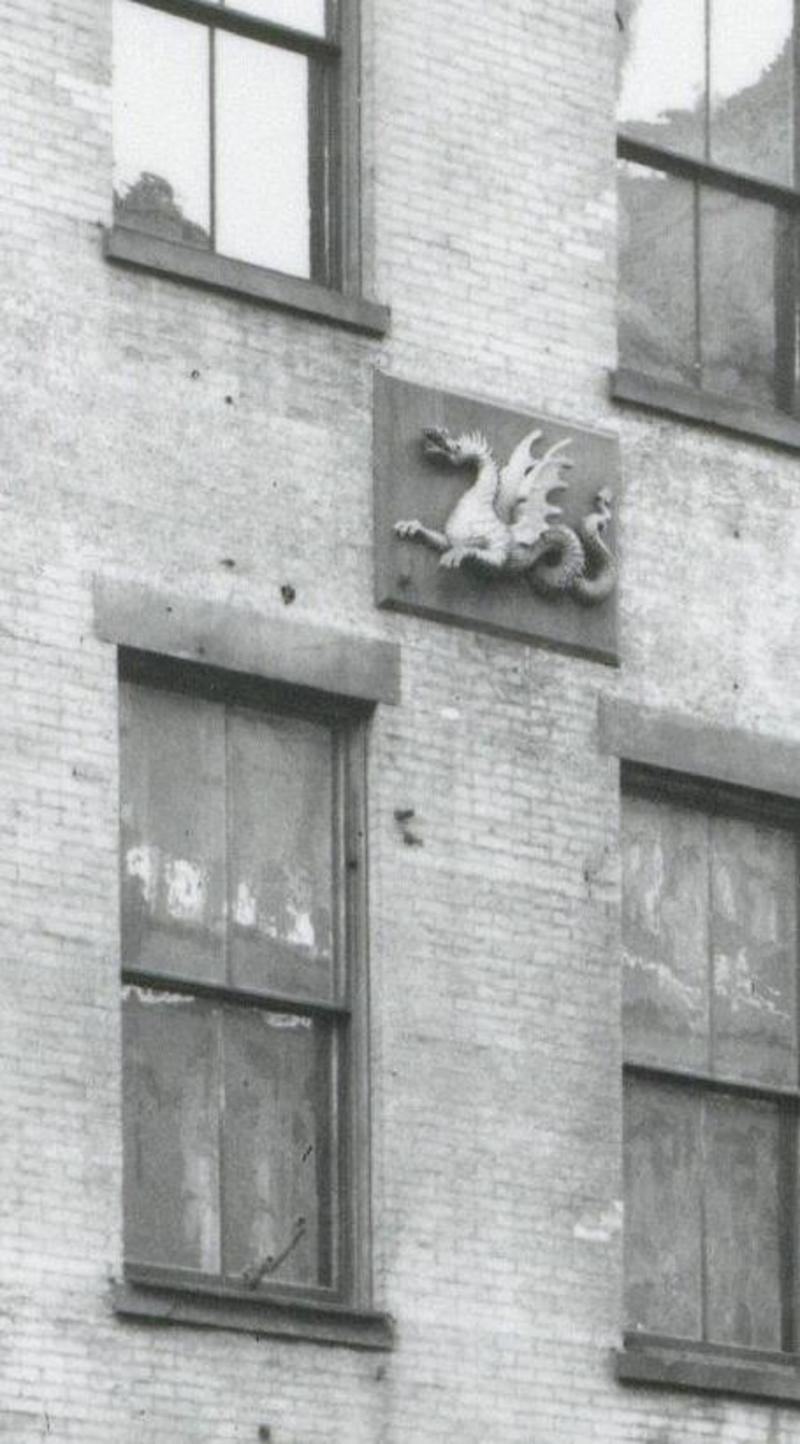 When I saw this 1905 Public Works photograph, I hoped to find out more about this dragon. Unfortunately, this part of Washington Street no longer exists, so I couldn’t see what this building looks like today. Instead, I decided to investigate who owned the building.

Symbols on walls and signs, such as a bell in hand or a green dragon, worked as a wayfinding tools before literacy was widespread.  Taverns were places to meet, stay, or start a journey.  While none of the building’s occupants in 1905 were drinking establishments (except for maybe one billiard parlor), the heirs of Solomon Wildes had a connection to a tavern life in early nineteenth-century Boston. 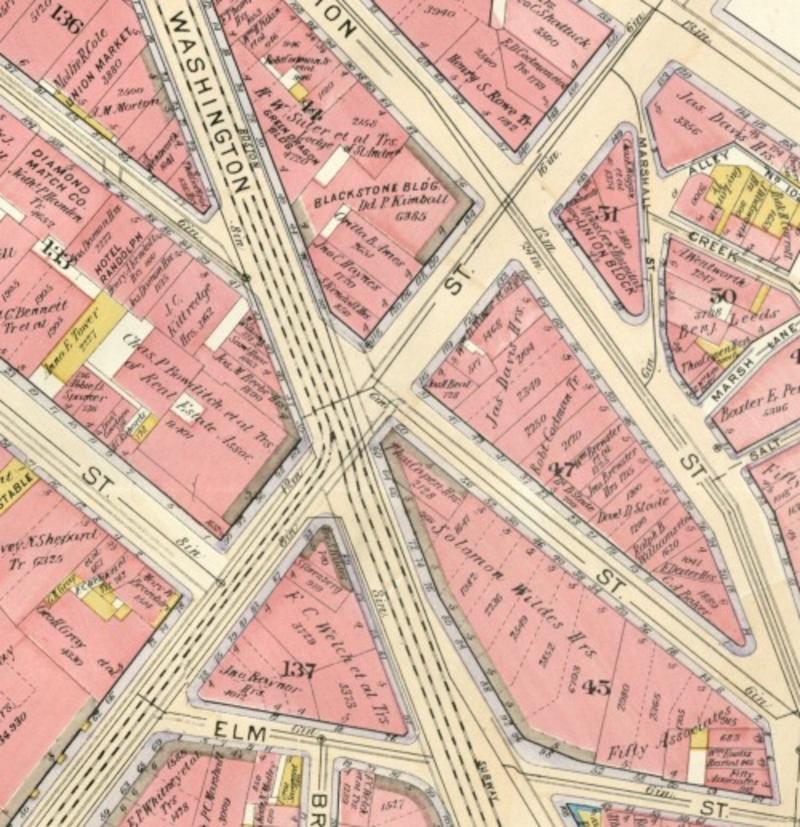 As you can see in this 1902 Bromley atlas, the heirs of Solomon Wildes (Ruth Adelaide Beech, Emma Gertrude Wildes Selfridge, and Anna H. Bates) owned most of the block before it was turned over to a trust in 1916. In 1867, Solomon Wildes died at his home in 30 Pemberton Square as a “gentleman” at age 76, and was buried in Mount Auburn Cemetery. 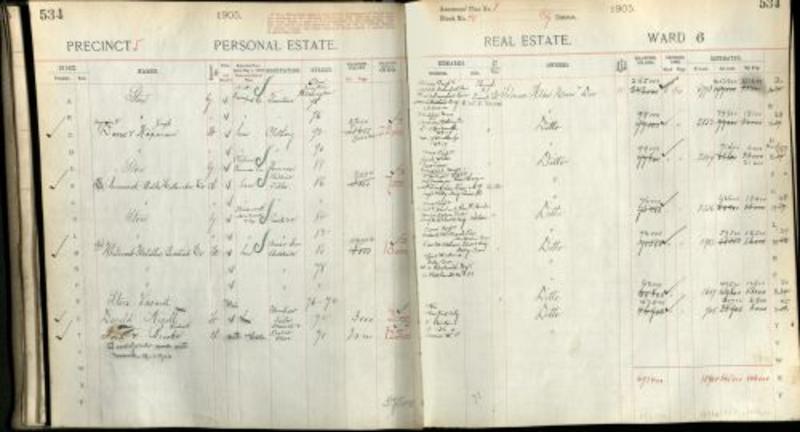 As you can see from 1905 tax record above, there were a number of investments and people involved in his estate almost 40 years later.

I followed Solomon’s life through a variety of archival records.  Born in Topsfield in 1791, Solomon Wildes seems to have followed his older brother, Ephraim, to Boston.  Ephraim first appears in the Boston City Directory in 1816 as an innkeeper on 45 Ann Street. Five stagecoach lines departed from his tavern that year. Ann Street (today known as North Street) in the nineteenth century was part of Boston’s red-light district in addition to being the location of a number of taverns and brothels for sailors and other travelers. In 1823, Solomon is running Wilds & Hosmer with Hammond A. Hosmer on 11 Elm Street, off of Ann Street. 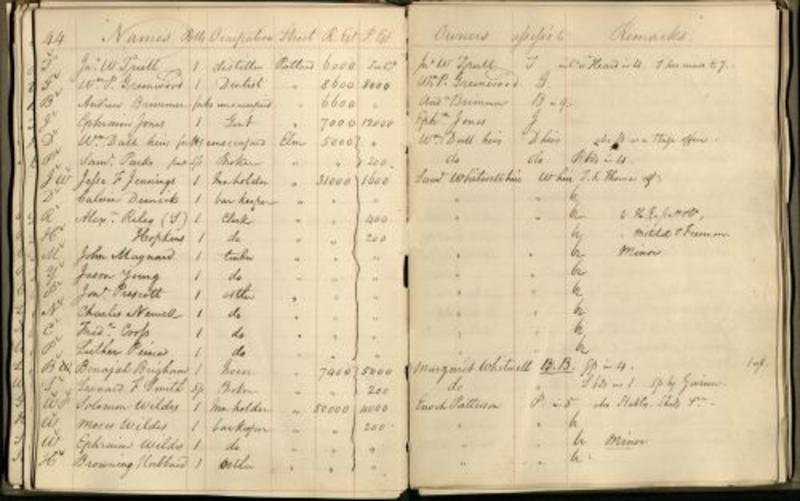 In the above tax record for Ward 4 in 1830, Solomon is not yet a landowner, but has a personal estate that is not insignificant. He is listed as an innholder while his brother and nephew, Moses, are barkeepers. Even if there is no direct correlation, the dragon is a reflection of their mark on the tavern business, which was charted through archival records.