Notes from the Archives: National Handwriting Day and the Palmer Method

It's National Handwriting Day! Did you take a penmanship class in school? Did you ever learn the Palmer Method? 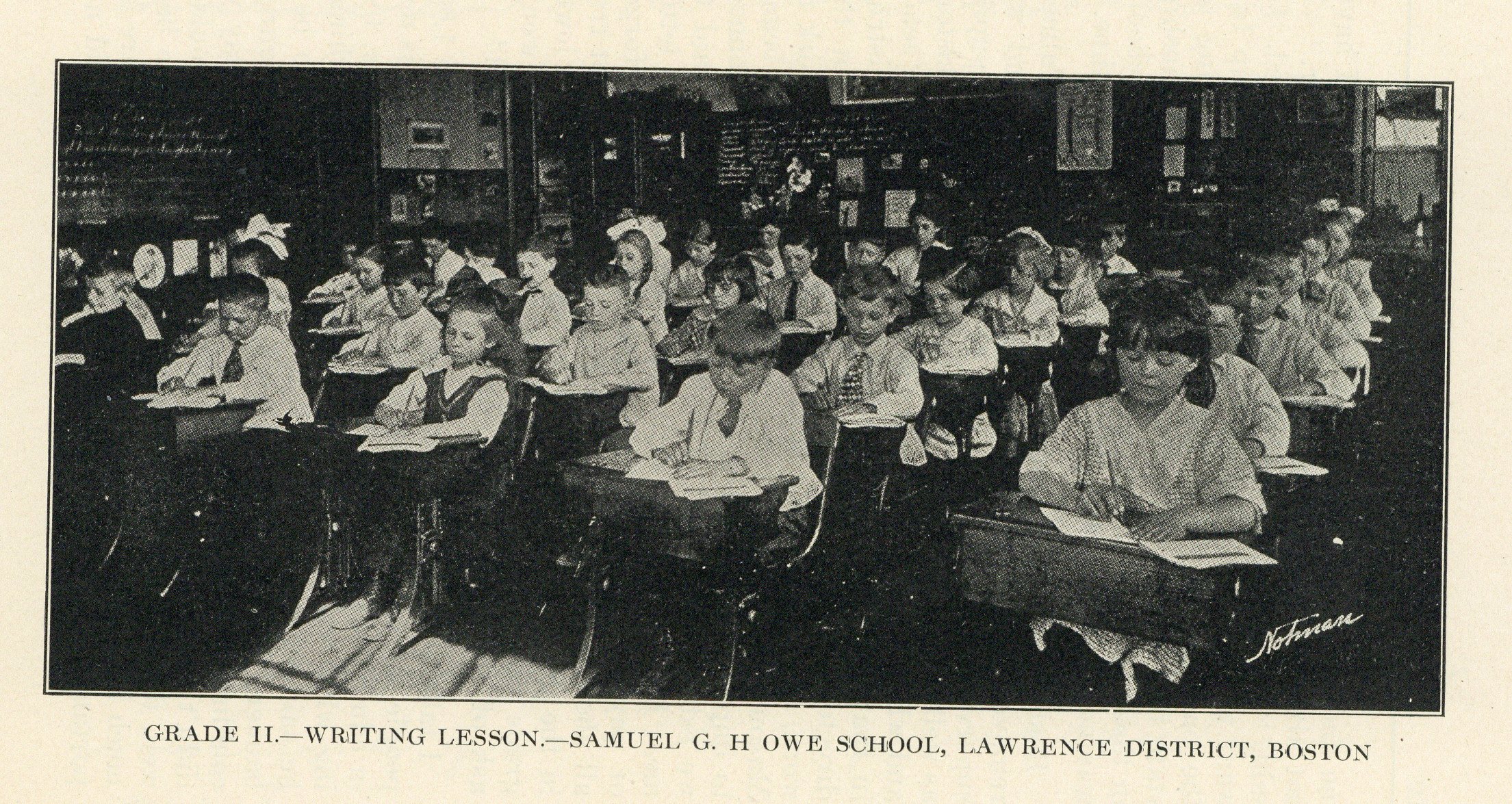 Boston’s schools taught many different types of penmanship in the 18th and 19th century. For example, in 1897, Boston’s School Committee recorded that students across the City were learning the “Natural System of Vertical Writing,” “Merill’s Vertical Penmanship,” and "Spencerian Penmanship.”

In 1908, the School Committee decided that penmanship classes should be standardized across the district. The committee experimentally implemented the Palmer Method of Business Writing at all East Boston Schools. The experiment was a success. By 1911, all schools in the City taught the Palmer Method. 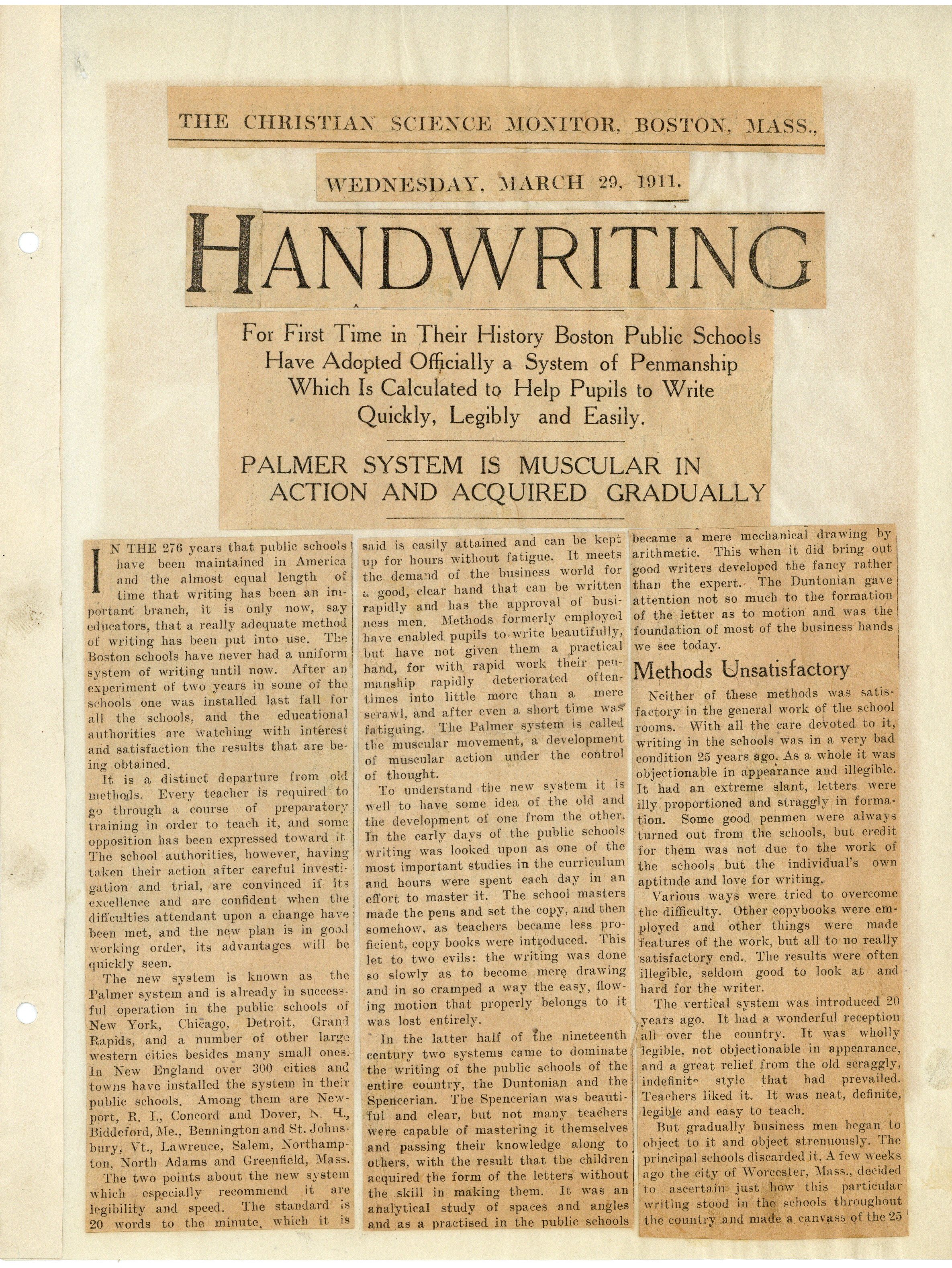 As you can see in this article published by the Christian Science Monitor, the Palmer Method was thought to be “muscular.”  Teachers taught students to write using the muscles in their arms instead of the muscles in their fingers. Students strengthened their muscles and practiced forming uniform letters by doing exercises like the ones below. 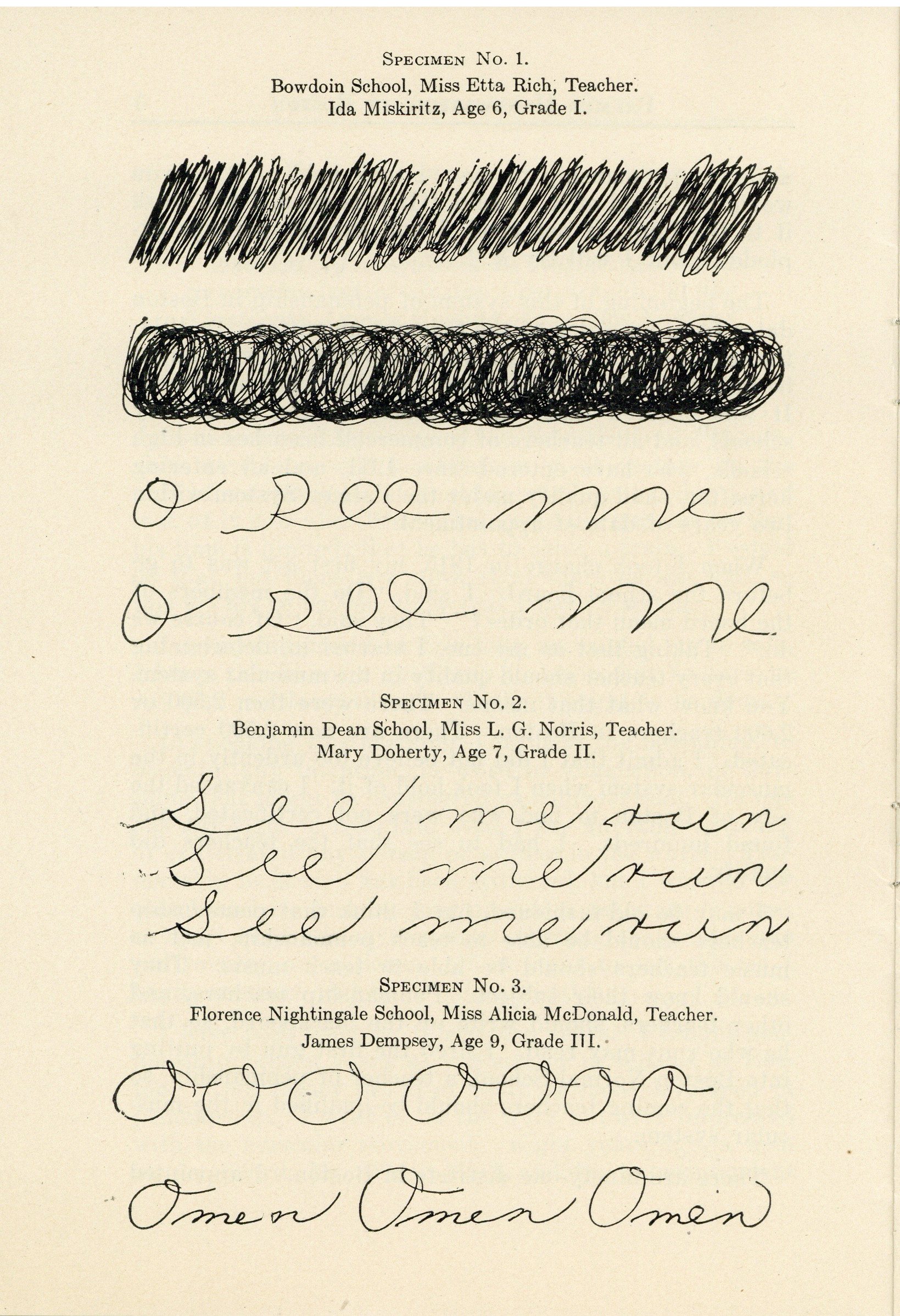 The Palmer method was extremely strict.  Teachers not only expected students to produce uniform handwriting, but also expected that the students would hold their arms and fingers in exactly the same way. This posed a particular problem for left-handed students. Teachers typically forced all students to write with their right hand. 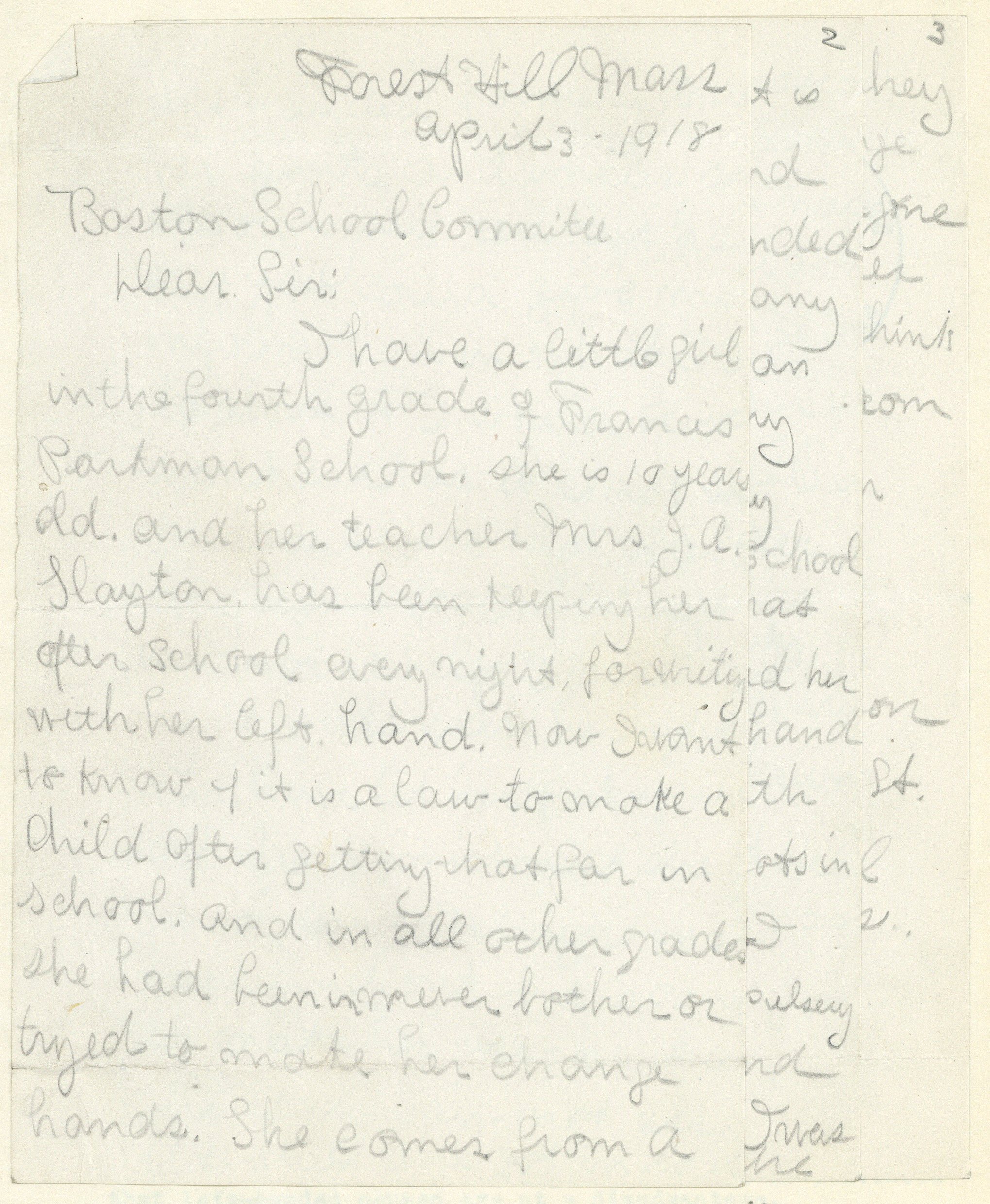 In 1918, a mother wrote the above letter to the School Committee. She complained that a teacher kept her fourth grade daughter after school and forced her to write with her left hand. She received no sympathy from the committee. 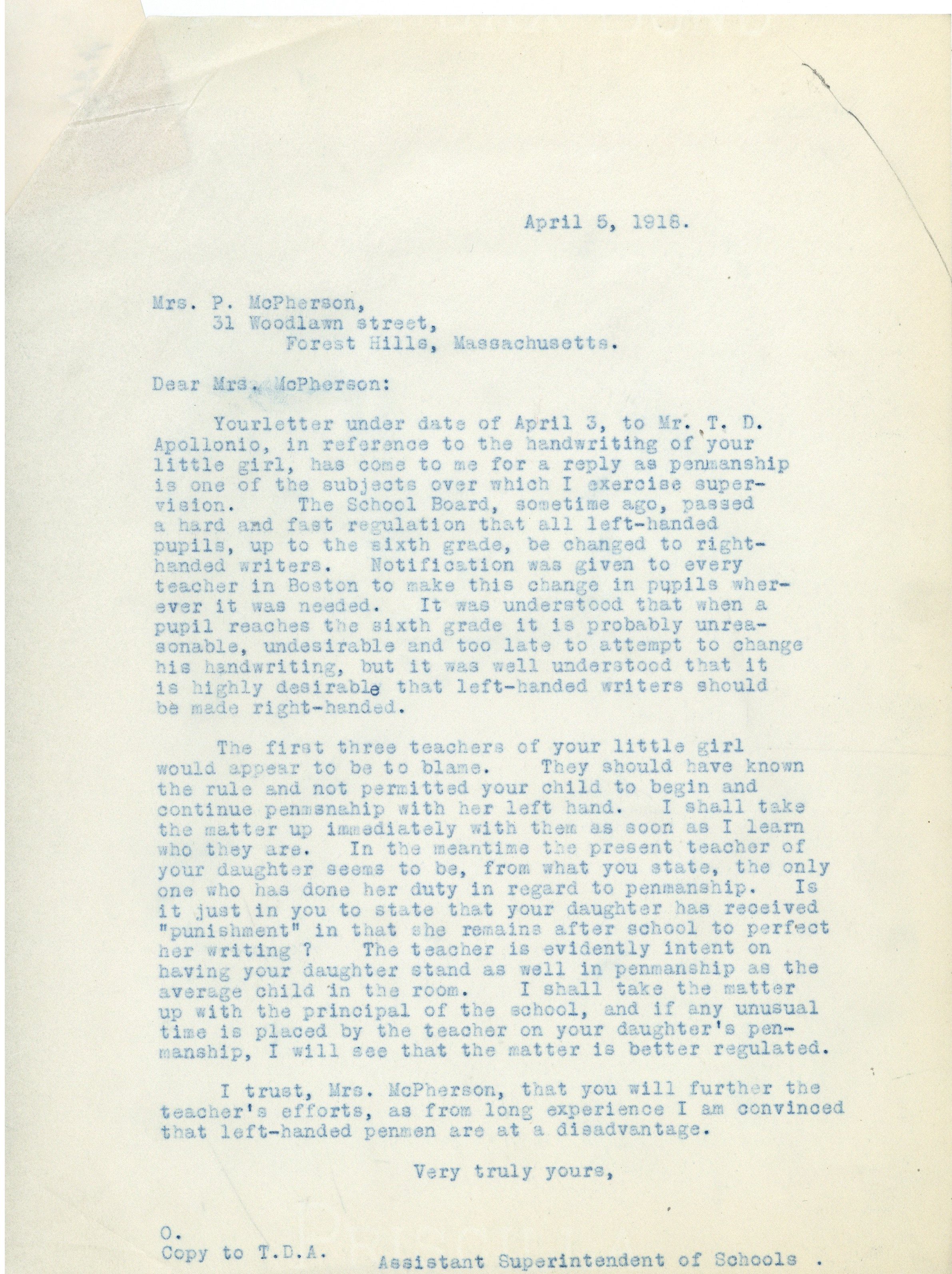 Rather, the assistant superintendent of schools wrote to her, and stated “it is highly desirable that left-handed writers should be made right-handed.” He instructed the mother to “further the teacher’s efforts, as from long experience, I am convinced that left-handed penmen are at a disadvantage.”