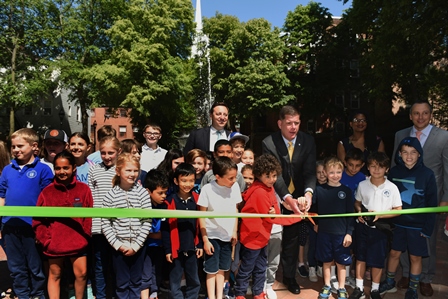 Also known as "The Prado," the Paul Revere Mall is an urban plaza designed by Arthur Shurcliff, an early 20th century landscape architect known for his work at Colonial Williamsburg. One of Boston's most visited urban spaces in the North End, the Mall connects Hanover Street to the Old North Church. As part of the design process, a team of landscape architects, arborists, and engineers reviewed historic materials, design, and tree health to develop the improvement plan.

"For a century, people from all over the world have come to The Prado to learn about the North End's history -- and every day, it brings friends and neighbors together to keep traditions alive," said Mayor Walsh. "This renovation preserves everything that makes this place great, while making it safer and more comfortable. Along will all other capital projects, we want Boston's beautiful, historic parks to bring communities together for generations to come."

Mayor Walsh recently announced $2.78 billion in capital investments over the next five years, including schools, roads, bridges, bike lanes, libraries, and more. To protect the North End from sea level rise due to the low-lying coastline, the Capital Plan invests $15.3 million in resilient open spaces like Langone Park and Puopolo Playground, $1 million for the playground renovation for the Christopher Columbus Park, and $200,000 for the design of the Cutillo Park renovation.

"The revitalization of The Prado successfully preserved the original design and historical charm of the park while also improving accessibility, increasing visibility, and completing much needed repairs to this vital open space that is enjoyed by North Enders and Freedom Trail walkers alike," said North End resident John Pregmon.

Mayor Walsh's FY20 continues to invest in preserving and creating a strong middle class, and creating opportunities for all those who live in Boston. The FY20 budget supports Boston's long-term plan, Imagine Boston 2030. Imagine Boston 2030 is Boston's first citywide plan in 50 years aimed at guiding growth to support Boston's dynamic economy and expand opportunity for all residents. The plan prioritizes inclusionary growth and puts forth a comprehensive vision to boost quality of life, equity and resilience in every neighborhood across the City. Shaped by the input of 15,000 residents who contributed their thoughts to the plan, Imagine Boston 2030 identifies five action areas to guide Boston's growth, enhancement and preservation, and is paired with a set of metrics that will evaluate progress and successes.