On October 13, Mayor Martin J. Walsh together with Boston Centers for Youth & Families (BCYF), the City of Boston's Public Facilities Department, and members of the community celebrated the opening of the renovated BCYF Vine Street Community Center in Roxbury. The $5.3 million dollar renovation is a key part of the Mayor's $50 million dollar FY19-FY23 Capital Plan investment in BCYF facilities. 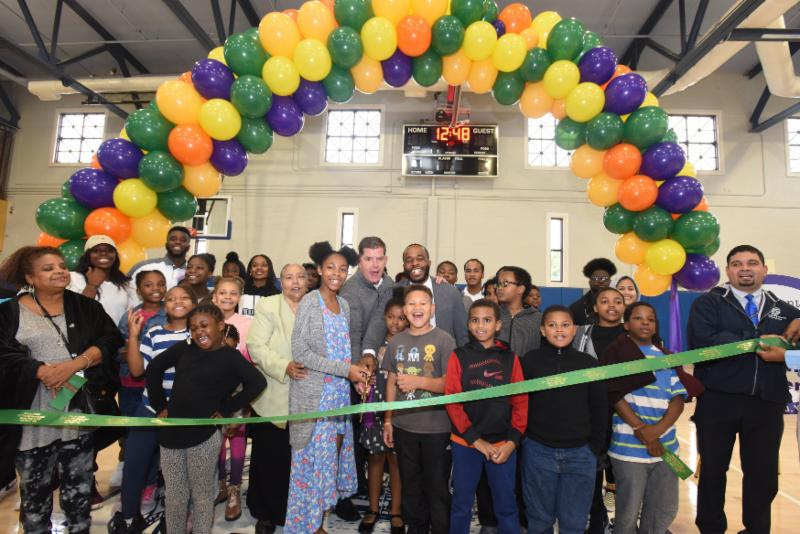 "For more than 100 years this center has been the heart of the community -- and now it's ready to serve Roxbury residents for another 100 years," said Mayor Walsh. "We've invested over five million dollars so that this building can offer more programs and have more high-quality space available to meet the needs of the community. I am excited to see everything that the center is now able to offer."

Interior upgrades included sound mitigation for the second-floor community rooms and the third-floor gymnasium, adding air conditioning to the gym, and refinishing the entire gym floor. Program spaces were reconfigured into multi-purpose areas to accommodate the community's dynamic needs. New kitchen equipment was added to the senior space, and the dance studio and teen rooms were renovated. A new recording studio was also built.

Exterior upgrades included a new ground floor facade with an accessible handicap ramp, HVAC upgrades, and a new roof. Since BCYF Vine Street Community Center serves as an evacuation site for the community during emergency situations, the project also included the installation of a transfer switch which allows a mobile emergency generator to be hooked up to the building in case of need.

"The reopening of the BCYF Vine Street Community Center is a testament to the City's commitment to investing in vital resources to the spaces that enable our communities to thrive," said Chief of Health and Human Services, Marty Martinez. "The renovation of the BCYF Vine Street Community Center will ensure that there is continuous and rich programming to support and uplift our residents for years to come."

"This center played an important role in my life and it continues to play an important role in the lives of so many of our youth and young adults," said Asad Hardwick, age 27 from Roxbury, who grew up attending programs and events at the center. "I can't think of another building in Boston that deserved this renovation more than Vine Street and I am so happy for all the families who will now have access to a state of the art community center right in their own neighborhood."

BCYF, the City of Boston's Public Facilities Department, and Bargmann Hendrie + Archetype architects, collaborated closely with BC Construction Company, the general contractor, on this project. In addition to renovating the BCYF Vine Street Community Center, other capital projects in the area include a $73 million investment on the  recently opened Dearborn STEM 6-12 Early College Academy; upgrades at the local BFD station Engine 14 Ladder 4; security-related improvements at the Wheatley School; and kitchen upgrades through the My Way Cafe program to the Boston Day & Evening Academy, Mason School, and Dudley Street Neighborhood School. Almost $1 million were also allocated to improve the Dudley Town Common for gathering and civic uses.

Boston Centers for Youth & Families (BCYF) is the City of Boston's largest youth and human service agency. BCYF operates 36 community centers in Boston that offer a variety of engaging and enriching programs for people of all ages created through community input and need. BCYF also oversees citywide programs including the nationally-recognized violence intervention and prevention Streetworker Program, the GIRLS Initiative, Camp Joy special needs program and many aquatic offerings.