The $2.4 million dollar renovation is part of the Mayor's Imagine Boston 2030 Capital Plan.

Mayor Martin J. Walsh together with the Boston Parks and Recreation Department and members of the community today celebrated the reopening of the renovated Ramsay Park in the South End, named after local veteran Captain David L. Ramsay who served as a pilot during the Vietnam War. The $2.4 million dollar renovation is part of the Mayor's Imagine Boston 2030 Capital Plan. 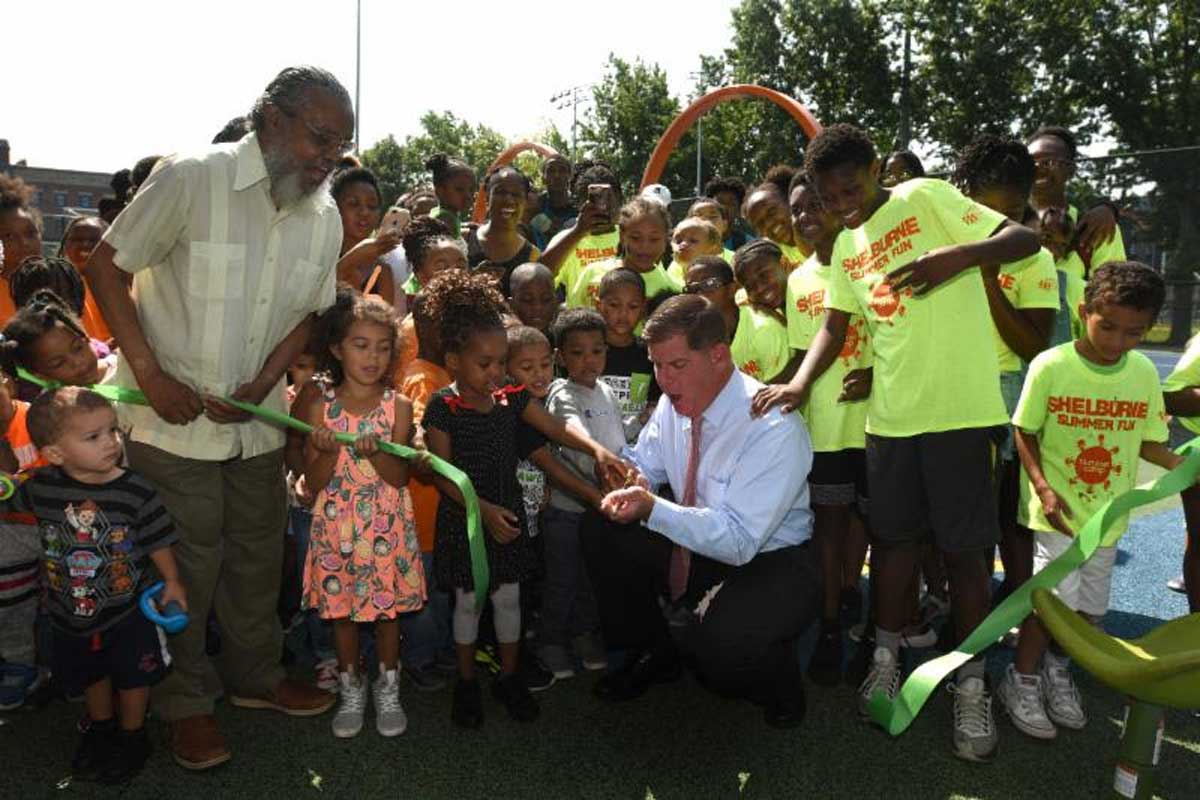 "Ramsay Park has been transformed into a state-of-the-art destination, and it's great to be able to celebrate the reopening together with the community who offered much input that brought us to this day," said Mayor Walsh. "Tennis, soccer, basketball, skateboarding, and children's play areas are just some of the activities that this park offers, along with upgraded lighting and landscaping that make it a welcoming place for residents of all ages to visit."

Additional features include 22 new trees, a multi-use splash pad and skateboard area, and new LED sports lighting to new and existing athletic facilities. Cosmetic improvements were also made, including the replacement of fencing along Shawmut Avenue with more welcoming concrete walls, and the resetting of five granite bollards commemorating Captain Ramsay.

The renovation at Ramsay Park is part of the largest-ever capital funding for Boston parks. This series of investments also include $6.3 million to complete the construction on Phase 1 of the Smith Playground in Allston-Brighton; a $4.4 million investment in Cassidy Field; $3.9 million to improve Noyes Park; the completion of Martin's Park, a universally accessible park near the Children's Museum; a $4.8 million investment to revitalize the pathways around Jamaica Pond; a $5 million investment in the Garvey Playground; and $6.2 million for the continued renovation of Harambee Park. In addition, a $4.2 million investment will be made in the South Bay Harbor Trail, which will serve as an important link in the City's Greenway and is part of the city's transportation plans.

In addition, the capital budget invests in long-term planning for Boston's most iconic park -- the Boston Common. The capital plan sets aside $500,000 to develop a master plan to bring the nation's oldest public park to the level of excellence commensurate with its historical importance and use by the City's residents and visitors. The budget also invests $800,000 into Franklin Park, to develop a master plan that will enhance historic Franklin Park as a keystone park in the geographical heart of the City.

Mayor Walsh's FY19 budget continues to invest in preserving and creating a strong middle class, and creating opportunities for all those who live in Boston. The FY19 budget supports Boston's long-term plan, Imagine Boston 2030.

Imagine Boston 2030 is Boston's first citywide plan in 50 years aimed at guiding growth to support Boston's dynamic economy and expand opportunity for all residents. The plan prioritizes inclusionary growth and puts forth a comprehensive vision to boost quality of life, equity and resilience in every neighborhood across the City. Shaped by the input of 15,000 residents who contributed their thoughts to the plan, Imagine Boston 2030 identifies five action areas to guide Boston's growth, enhancement and preservation, and is paired with a set of metrics that will evaluate progress and successes. To learn more visit, imagine.boston.gov.