Robert Burns statue returned to the Back Bay Fens

After more than four decades, Boston’s statue of Scottish poet Robert Burns was restored and moved from Winthrop Square back to its original location in the Back Bay Fens.

On October 30, a coalition of seven Boston organizations joined together to celebrate the re-installation of the statue with recitations, songs, and bagpipes in the spirit of the statue’s original dedication ceremony held on January 1, 1920.  The event was sponsored by the Boston Parks and Recreation Department, City of Boston Office of Arts and Culture, Millennium Partners, Fenway Civic Association, Fenway Alliance, The National Trust for Scotland Foundation USA, Emerald Necklace Conservancy, and Samuels & Associates. 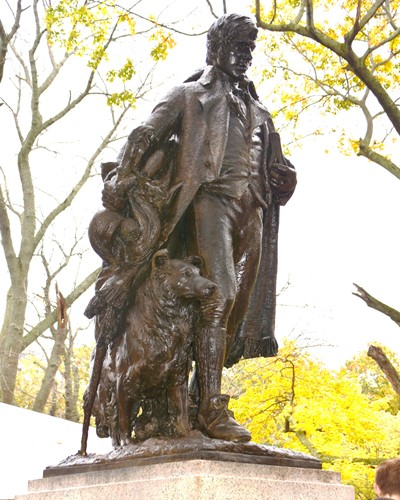 The statue of Robert Burns and his faithful dog, Luath, was created by sculptor Henry Hudson Kitson in 1920 and originally situated in the Back Bay Fens near sculptor Daniel Chester French’s monument to Irish poet John Boyle O’Reilly. The juxtaposition of the two works was deliberate and meant to recognize Scottish and Irish literary tradition in a pastoral setting reminiscent of their work.  The sculpture was moved to Winthrop Square in 1975 and after a prolonged community effort was finally returned to its rightful place in the Fens on October 30, 2019. 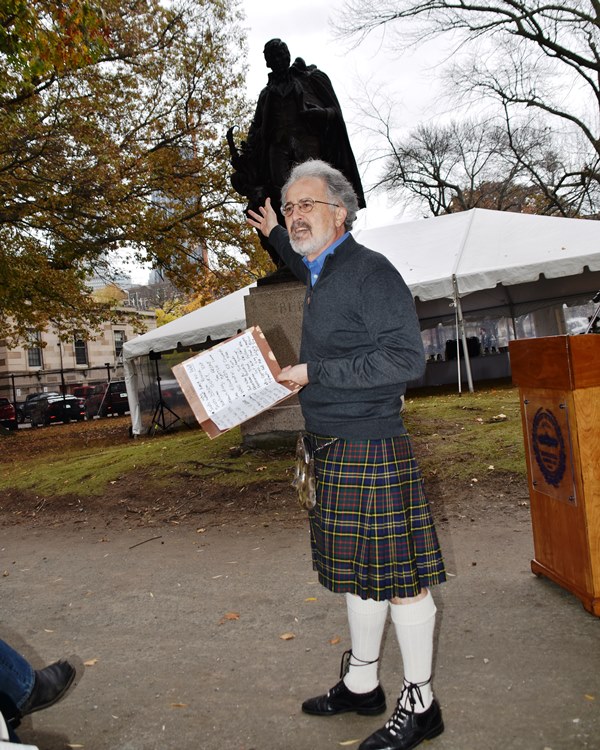 Poet Robert Burns (1759-1796) was a working-class Scot who became a pioneer of Romantic literature. His work includes themes of republicanism, patriotism, class, gender, and poverty. He has inspired American politicians and authors like Abraham Lincoln, John Steinbeck, and JD Salinger. Burns remains an enduring cultural icon for Scots around the world; most famously, his "Auld Lang Syne" is sung each New Year’s Eve.

Boston Parks Commissioner Ryan Woods cuts the ribbon at the October 30 celebration marking the return of the statue of Scottish poet Robert Burns to the Back Bay Fens after it was spirited away to Winthrop Square in 1975.