In the first post of our Stories of Mount Hope blog, we reveal the history of an unusual monument near Webster Avenue.

The story is carved on the seven-foot tan granite monument facing east on Webster Avenue:

Sacred to the memory of John Edward Kelly
Irish patriot and exile
Born in Kinsale. Ireland 1839
Died in Boston Jan 1884
Engaged in the attempted Irish revolution of 1867
Captured in arms at Kilcooney Woods.
Was tried under English law for high treason
Was sentenced to be hanged, drawn and quartered
Transported with 62 other Irish patriots to
West Australia Penal Colony 1867
Was released from prison in 1871
By religion a Protestant
By birth a brave man
By birth a principled soldier of liberty
God Save Ireland 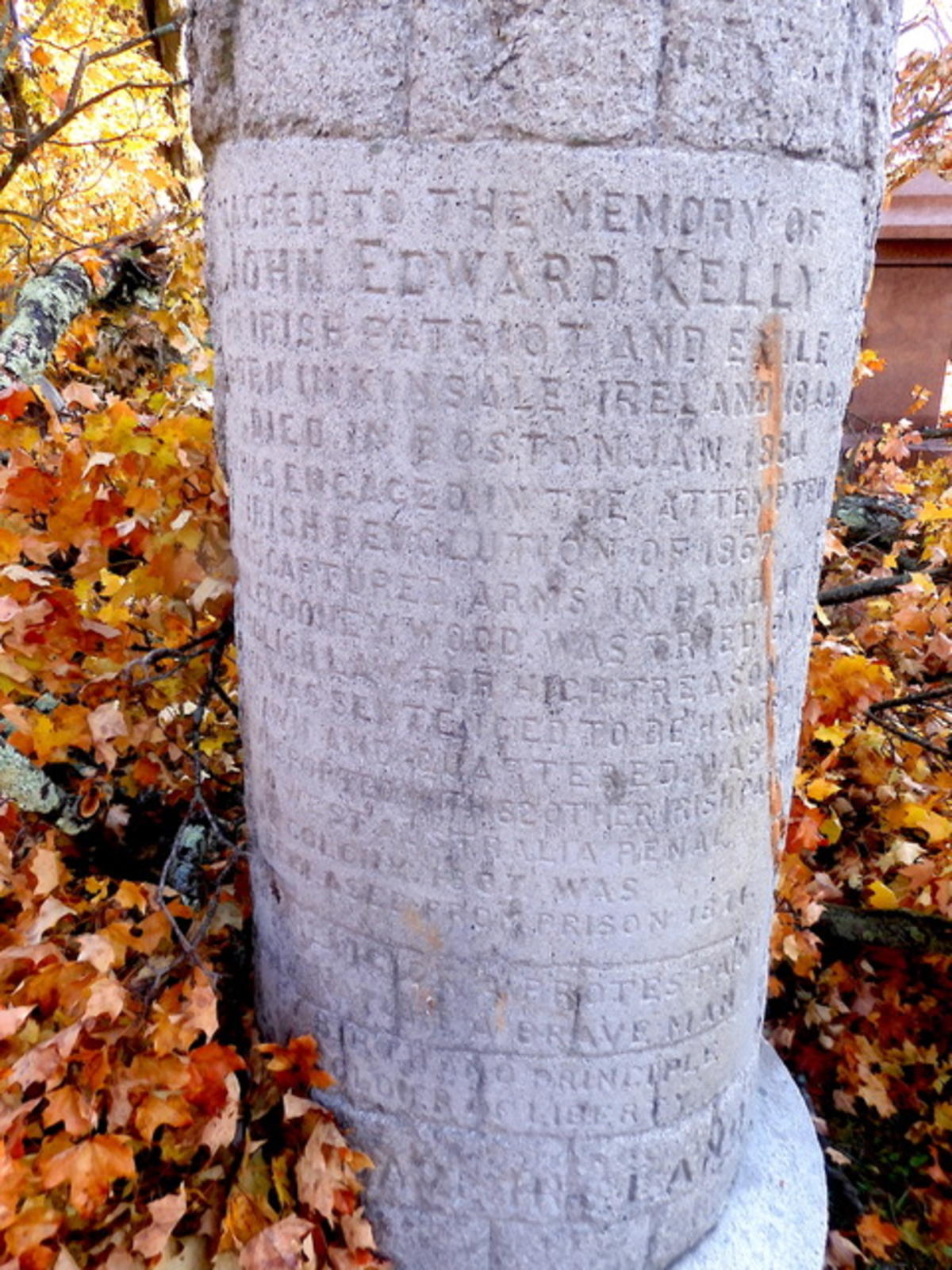 The Boston Globe of January 20, 1884, celebrated John Edward Kelly in print, Appropriately, Kelly had been apprenticed to a printer in Boston.

“On Friday last there died in the City Hospital a man whose name is known to Irish patriots everywhere- John Edward Kelly. He was one of the Irish patriots who went from Boston to Ireland to prepare for the revolution of 1865.”
“He will be buried at Mt Hope Cemetery today at 2 p.m.” 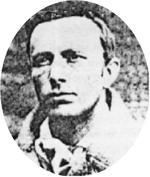 Kelly was born in Kinsale, County Cork on July 6, 1839.  He emigrated about 1840 before the Great Famine with his moderately wealthy Protestant family to Halifax, Nova Scotia, Canada.

After his schooling, he came to Boston as a printer’s apprentice, where he is thought to have developed his lifelong interest in Irish history, particularly the British occupation. Although a Protestant, Kelly became a dedicated Fenian, and after capture during “the rising” in 1867, he was tried for high treason and sentenced to be hanged, drawn and quartered. His sentence was commuted in 1867 to penal servitude.

He was put on board the last convict ship to sail from London to Australia, the Hougoumont, in 1868.  One of the 62 other political prisoners was John Boyle O’Reilly, who later became well known in Boston as a poet, writer and editor of the Archdiocese newspaper, The Pilot.

After building roads on work gangs and spending five years in English and Australian prisons, Kelly was released in March, 1871, with orders never to return to Ireland.

After release, he worked at various jobs including gold mining in Australia and California. Kelly returned to Boston in 1876 and resumed work in the printer’s trade as a proofreader.  He died in the city in 1884.

The presiding officer of the Central Division National Land League,Thomas Flatley, was one of the speakers at the dedication of Kelly’s monument.  The League was formed in Ireland in 1879 by tenant farmers and Irish nationalists. Disbanded in Ireland in 1882, it was still active in Boston in 1884, and it presumably planned and paid for the monument.

John Boyle O’Reilly also spoke at the dedication. “Around the exile’s tomb,” reported the Globe on November 24, 1885, during the dedication of  “the tomb in the form of an Irish round tower castle”, O’Reilly paid a final tribute to John Edward Kelly: “The man who sleeps under this monument gave an example of varieties of courage, fidelity and sacrifice.” 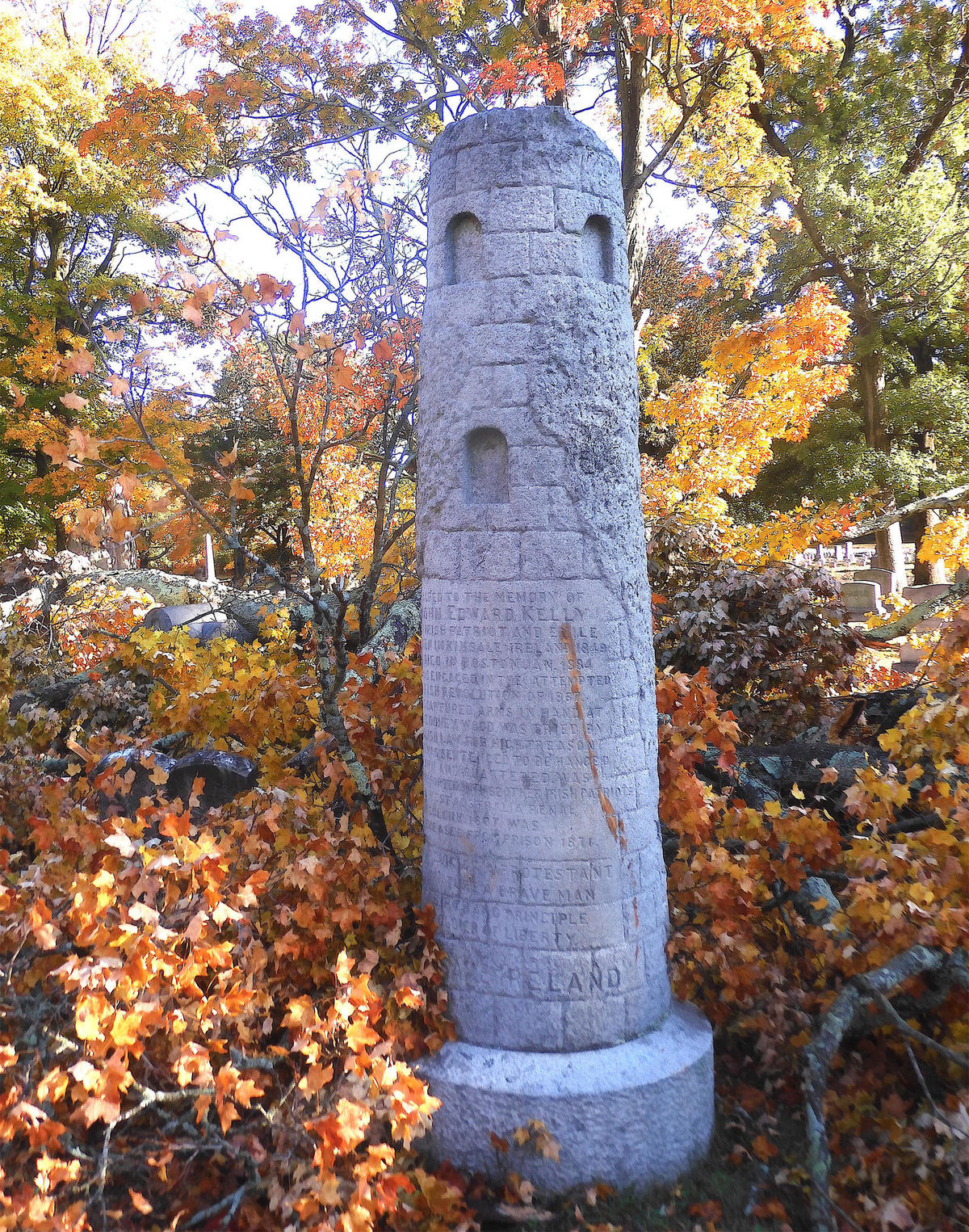 This story was authored by Richard Heath who also took the pictures and edited by Sally Ebeling (January 20, 2022).

The Stories of Mount Hope blog features periodic posts on a variety of topics concerning historic Mount Hope Cemetery. Please let us know if there is something you think should be highlighted — we will have an email address for you to use by our next post!