Traversing Boston: Touring the City from above and below

Bostonians have been using public transit systems since the late 19th century. Street-level systems featured streetcars and trolleys that traveled down the center of Boston’s busy streets while a rapid-transit system quickly transported passengers below City streets through subway tunnels and high above them on an elevated rail. In this final installment of a two-part series, we ride along with residents and explore Boston from above and below ground.

Commuters Julia Wright and Mary Duchaney traveled into Boston via streetcar from their Dorchester neighborhood. The women describe how their daily commute took over an hour due to horse-drawn traffic and frequent stops! To get to work each day, both women traveled along Dorchester Avenue to South Station. 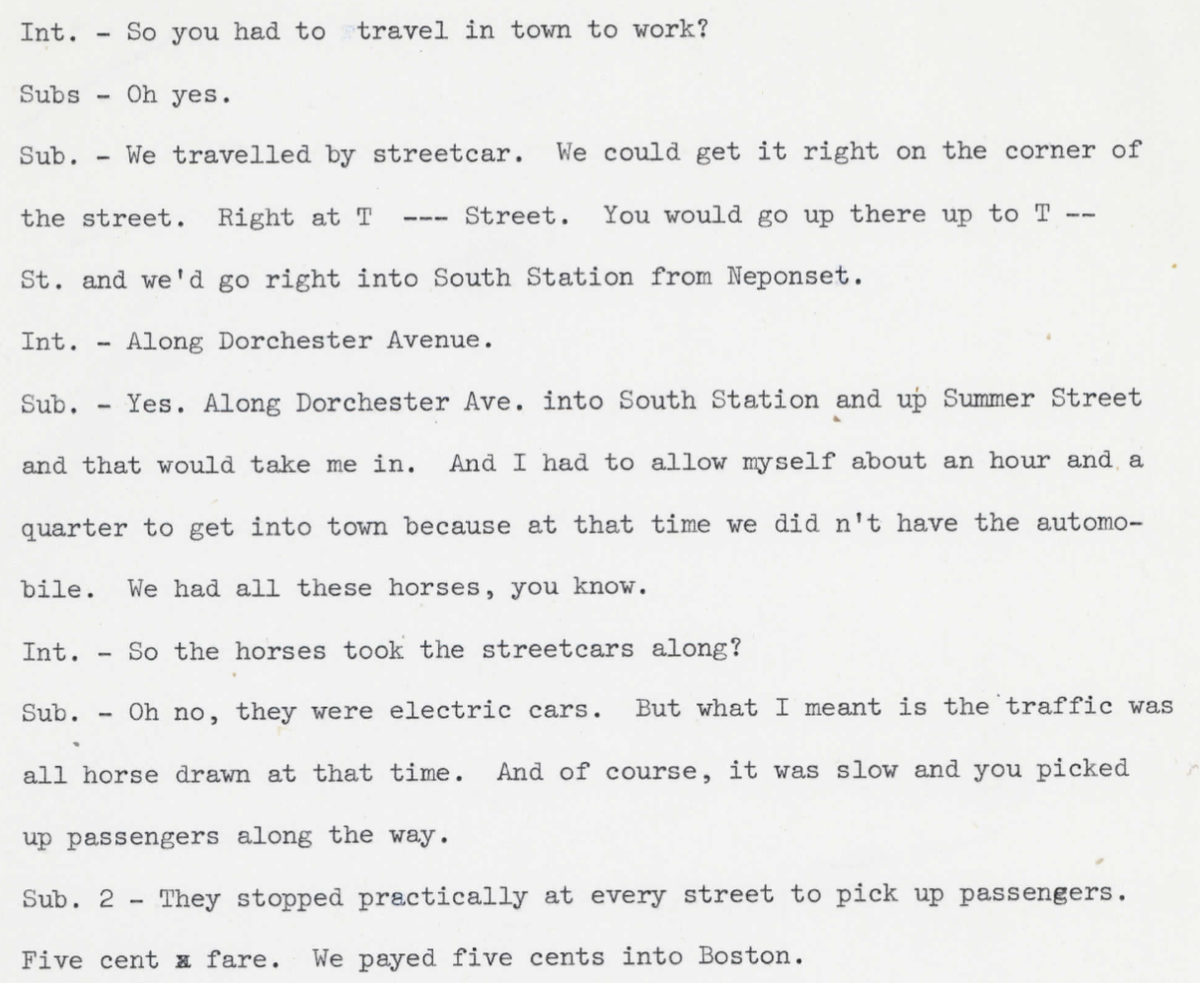 Julia and Mary describe the sense of freedom the streetcars provided. They discuss the system’s open cars and their ability to transport residents to areas outside of the City for recreation.

Early trolley car that traversed the street-level system were not as weather-proof as modern cars. For rider Gertrude Ellis, trips outside of her Brighton neighborhood via the trolley could get chilly. Gertrude describes the outfits worn by the drivers and offers outfit advice to daily commuters!

Daily riders of a transit system get to know its quirks and for Needham resident Dr. Roy B. Stewart, this was no different. Roy recalls his childhood in Brighton and his experience riding streetcars and trolleys. He remembers warm summer afternoons in which he expertly navigated street level routes and traveled across neighborhoods for a small cost.

Like Roy, Dorchester residents Jack McCready, Mr. Murphy, and Mr. Paget had expert knowledge of street-level and rapid-transit systems. Mr. Paget describes how he and his Dorchester neighbors had to choose between the convenience of quick-rapid transit or the lower cost (and slower pace) of streetcars and trolleys.

Transit systems encouraged Bostonians to explore new parts of their city and provided new opportunities. Roslindale resident Philip Pofcher describes a trip taken by his father who was looking to move his business to another part of the City. Philip recalls that his father exited the train after a tense conversation with the conductor, only to find the perfect spot for his business. 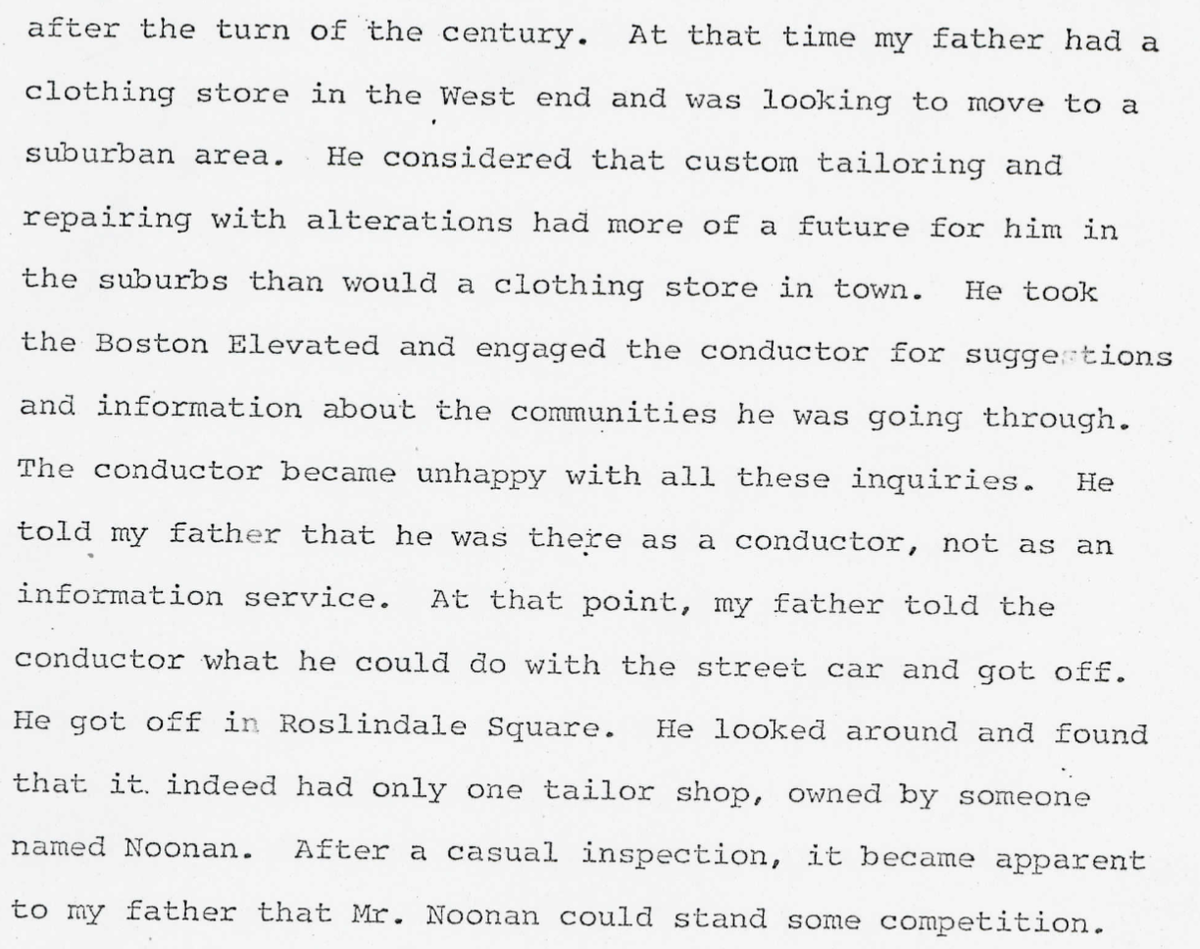 Being able to travel to all points of the City and beyond appealed to a wide range of passengers. For Daniel Maguire of Charlestown, the speedy rapid transit system presented an opportunity for some mischief, as he had a habit of jumping trains. He recalls one particular ride where he traveled further than he expected!

Continuing their oral history, Jack McCready, Mr. Murphy, and Mr. Paget describe the decision to create an underground extension of the rapid transit system that ran through Dorchester. Jack discusses how this choice provided Dorchester residents with new ways to travel through the City and even across the Charles to Cambridge.

Boston’s street-level and rapid-transit system provided Bostonians the opportunity to travel in new ways, creating a sense of freedom and possibility. Residents could travel between neighborhoods or use the systems to create new opportunities for themselves. Today, the T transports passengers around the City just as  these systems did decades ago, proving that Boston has always been a city on the move!