Since the late 19th century, Boston’s transportation system has been on the move, always changing to fit the needs of residents.

Historically, Boston’s transit systems operated locally and regionally, supporting businesses and whisking residents to different parts of the City and beyond. In this first of a two-part series, we look at Boston’s transportation systems of the past, and explore how Bostonians traversed and interacted with their city!

Over a century ago, Boston’s streets were busy with horse-drawn vehicles. Businesses relied on this type of transportation to criss-cross the City and supply goods to their customers. Before modern refrigeration, Brighton resident Gertrude Ellis remembers horse-drawn vehicles delivering blocks of ice for home use. In order to fit into home ice boxes, larger blocks of ice were broken into pieces. Gertrude describes how this process provided a fun treat for neighborhood children!

Daniel Maguire, a Charlestown resident, discusses cold, early mornings in which he helped his father deliver milk to area customers. A horse-drawn wagon was used to transport the milk, and Daniel recalls how the horses knew the delivery route just as well as Daniel’s father.

Take a look at a milk delivery driver’s notebook complete with handwritten notes and invoices for milk delivery!

Horse-drawn vehicles were also vital in emergencies. Similar to Daniel’s experience on his father’s delivery route, in East Boston, resident Harold McLean describes how well trained the horses who carried fire engine trucks to blazes were, proving how integral this type of transport was to Boston in the early 20th century.

Horses were valuable allies in other City projects as well. As Boston’s neighborhoods grew and expanded, residents not only built houses but also moved them. Roslindale resident, Philip Pofcher describes the experience of watching a team of two horses help move an entire house! The process may seem slow by our modern standards, but nevertheless paints a picture of how humans and horses worked together to successfully complete big projects. 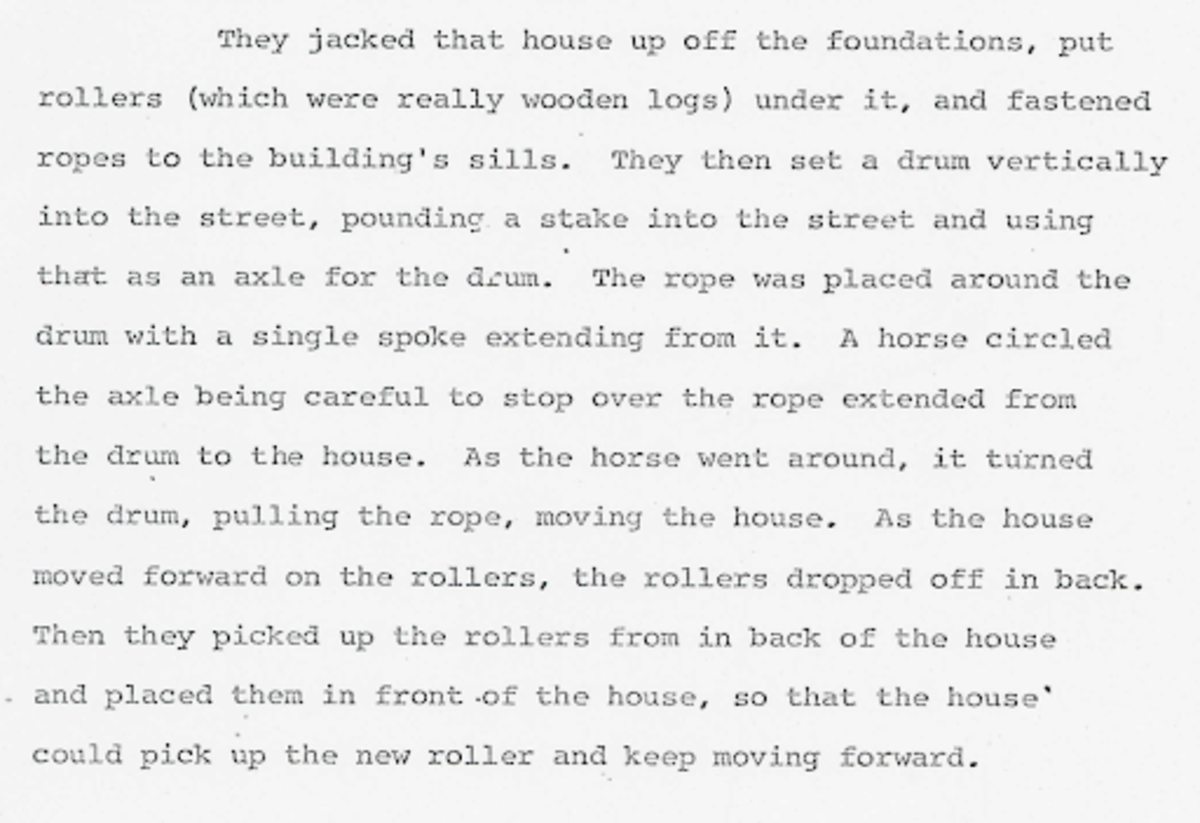 Just as horse-drawn vehicles expanded business opportunities in Boston’s streets, the City’s ferry system created a spot for commerce in the waters of Boston Harbor. Continuing his oral history, Harold McLean describes how the North Ferry and the South Ferry were vital parts of the waterfront in the early 1900s, moving people, vehicles, horses, and goods from one part of harbor to another.

In July 1875, the Boston, Revere Beach, and Lynn Railroad, known as the Narrow Gauge, began transporting passengers to regions of East Boston as well locations outside of the City. North End resident Pietrina Maravigna describes how her family used the railroad to visit her sister during a Christmas holiday. Pietrina’s family traveled to the Narrow Gauge’s East Boston terminal via the Narrow Gauge ferry, which picked up passengers from the North End’s Rowes Wharf.

Pietrina loved the railroad and remembers trips her mother took to visit her sister and the kindness displayed by the Narrow Gauge’s conductors. 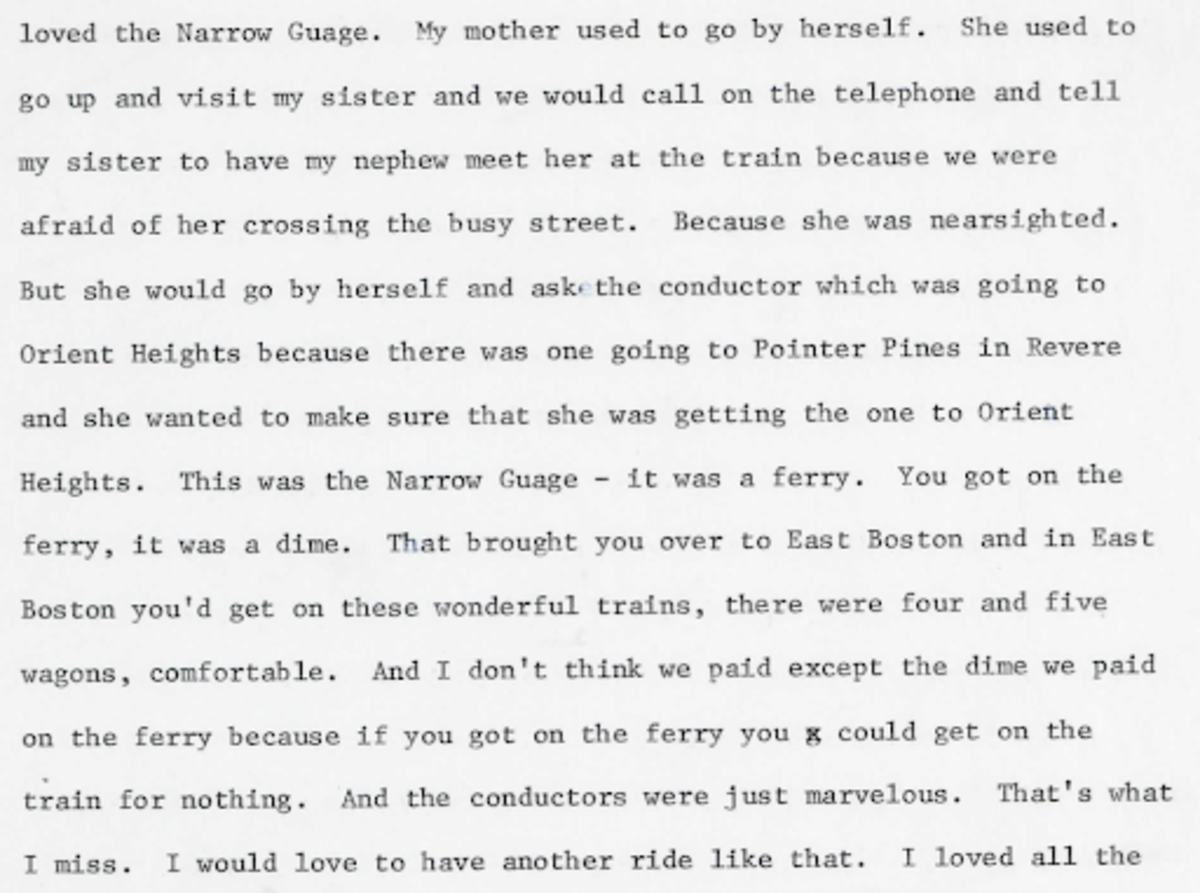 The Narrow Gauge railroad was 10 miles long. After its tracks weaved through East Boston, the railroad extended beyond Boston to cities and towns along the Massachusetts coastline. This provided Bostonians with an easy, accessible way to travel to stops, such as Revere Beach and Point of Pines.

In the late 1930s, East Boston resident Dino Liberti took advantage of the destinations reachable by the railroad. He describes his daily trip from the railroad’s first terminal in East Boston to its final stop in Lynn, Massachusetts, to attend his parochial high school.

Boston’s legendary winters certainly put the usability of the City’s streets to the test as extensive snow plowing is often necessary. While plowing creates access to roads, for a certain group of Bostonians, it also created new ways to explore their neighborhoods! Richard W. Davis discusses how, during his early years, the City used a roller to flatten the snow instead of actively removing it from the streets of his Roslindale neighborhood. For Richard and his friends, this provided them with a new form of winter transportation — sledding! 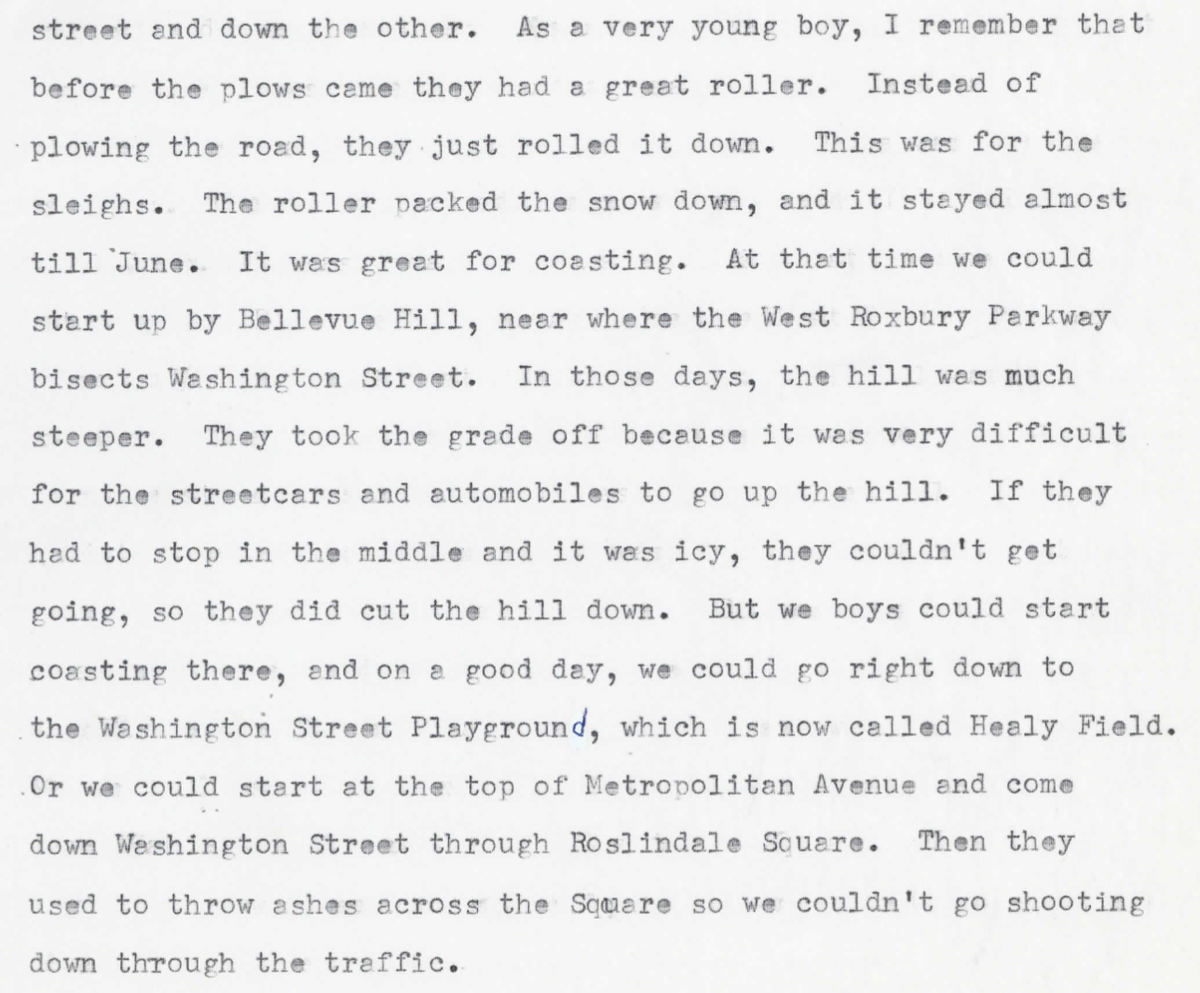 Richard also describes how snow removal in Boston evolved and details how he and his friends later hitched rides on the back of V-shaped plow trucks as they zig-zagged the streets.

As Boston has grown, the transportation needs of residents have evolved. Horse-drawn vehicles, and the Narrow Gauge railroad are no longer used by busy Bostonians, but they remain an important part of the City’s transit history. For generations of residents, these modes of transportation were an important part of daily life, providing them with goods and services and connecting them with their City and each other.