Voices of Boston: Arts and culture in Boston's Black community

James Henderson, a black poet, playwright, and actor from Virginia, came to Boston in 1917. Boston became his home, and he reflects on his more than 50 years in the City in an oral history from the 1970s.

James Henderson saw much of the United States as part of a traveling theater company called “the Happy Days in Dixie Company.” Initially it was education that brought him to Boston in 1917. He planned to come and take special courses at Harvard for a year, before returning to the south.

After more than 50 years in the City, Henderson reflects on the nature of Boston. He remembers how residents of Boston have always considered themselves living in the center of the world. According to Henderson, this attitude has not changed a bit.

When Henderson first arrived in the City as part of the theatrical tour, he learned that the Harriet Tubman house was only available to women lodgers to rent. The mission of the Harriet Tubman house was to provide assistance and charity to working girls. He ended up on Windsor Street in Roxbury, where he stayed with a family for his first six months. 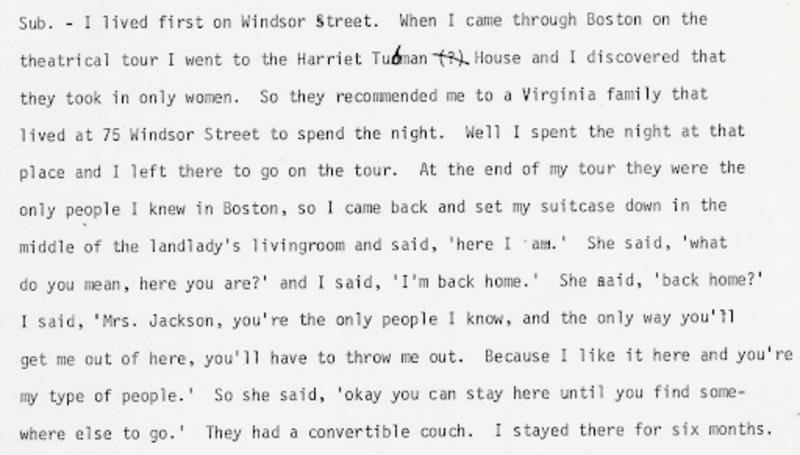 Henderson quickly met more people living in Boston, including a Mr. William Wellington Bryant, who Henderson refers to as “one of the substantial citizens of Boston.” James Henderson went to Mr. Bryant’s house on Wellington Street, where he ended up staying after his stay with the Jacksons. Henderson remembers his first experience at the house and being offered a job as a lawyer.

Henderson mostly earned his living working in the arts, including playwriting and poetry. However, he informs the interviewer, Lavert Stuart, that many members of Boston’s Black community worked as Pullman Porters and dining car waiters.

In his discussion of the Black community in Boston, Henderson notes that the majority of people he knew lived in the South End, or what he calls “outer Roxbury.” He recalls the yearly celebration of Crispus Attucks Day, on March 5, remembering the first casualty of the Boston Massacre, who was a Black man.

Henderson first arrived in Boston in 1917, just three years before the national imposition of prohibition. From 1920 until 1933, the production, importation, transport, and sale of alcoholic beverages was illegal. According to Henderson, however, prohibition in Boston was a joke!

Henderson remembers how many wealthy people responded to prohibition by “stocking up.” He reflects on working for the John Gilbert Company, which distributed groceries and liquor, starting around 1918.

Being an actor himself, Henderson closely followed developments in Boston regarding the stage. He reflects on how for Black performers in Boston, the Great Depression was a “salvation.” In particular, he notes the importance of the Adult Recreation Program in giving Black artists more artistic freedom.

At the height of the Depression, he was able to get a public works job, earning a mere $15 a week to support his family. Even during this difficult time, Henderson managed to put together a production of a play he had written.

During Henderson’s time in Boston, he put on various plays, especially in the 1930s. These plays led to Henderson having increased engagement with the public. In response to questions about his life in Boston, he highlights Boston’s literary and artistic treasures which made it a nice place to live. He acknowledged the prejudices found in the city, but found Boston on the whole to be a good city.

As he reflects on his life, he touches on the importance of the Civil Rights Movement and Martin Luther King Jr. in particular. Henderson highlights just how common and frequent protests, such as student sit-ins, were during this period.

Henderson recounts his long life in Boston in his rich 31-page oral history interview. To read more, check out the full oral history!