Voices of Boston: Rapid transit, 'Social Fights,' and a hippopotamus in Dorchester

Franklin Park Zoo gets a hippo and Boston builds a rapid transit system. Three men reflect on growing up in Dorchester in the early 1900s.

As part of the Boston 200 Bicentennial celebration, volunteers from various neighborhoods provided oral histories. These histories provide a unique perspective on life in Boston during the 20th Century. An interview with Jack McCready, Mr. Murphy, and Mr. Paget provides a personal take on the history of Dorchester, reflecting on their  earliest memories and the way Dorchester had changed since their childhoods in the early 1900s.

Dorchester is a neighborhood south of downtown Boston, sharing borders with Roxbury, Jamaica Plain, Hyde Park, South End, and the cities of Quincy and Milton. Originally a separate town created by the Puritans, Dorchester is now easily Boston’s largest neighborhood.

Jack McCready, Mr. Paget, and Mr. Charlie Murphy were interviewed together for the Boston 200 oral history collection. The three men were born around the same time, and all grew up in Dorchester. Jack McCready was born in Dorchester around 1905-1910, and lived there his whole life. One of his earliest memories of the area were the “social fights,” as he calls them, to keep out industrial development.

Jack identifies the leaders of these fights as the Pagets and the Murphys, who lived on the boundaries of the proposed sites. Jack believes factories would have been a negative for the area. Mr. Paget and Mr. Charlie Murphy are the other two subjects in this fascinating oral history.

Mr. Paget was born around 1908, just like Jack McCready, but did not move to Dorchester until he was five years old. Both McCready and Mr. Paget attended the local schools — the place of one of Mr. Paget’s first memories.

Mr. Paget notes the makeshift parade that went up Talbot and up Dorchester Avenue, pictured below. 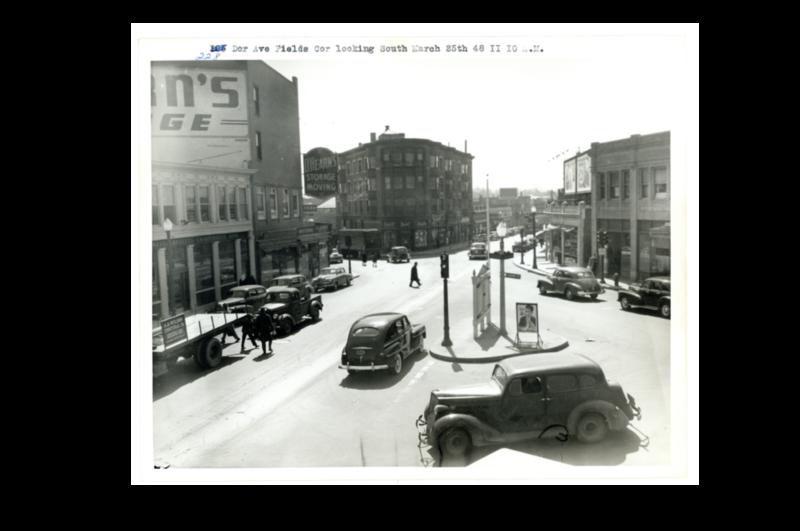 Along with the end of World War I, Mr. Paget also remembers a new addition to the Franklin Park Zoo.

Mr. Charlie Murphy was not born in Dorchester, but moved to the neighborhood when he was nine years old. He remembers the Great Depression in the 1930s, and recalls that it did not cause dramatic change to the makeup of the neighborhood.

The men all remember that during their childhoods, they made their own fun. Mr. Paget notes the resourcefulness of children in making toys or games to have fun.

Dorchester had a large and devout Catholic population, especially in the early half of the 1900s. McCready says that telling someone which parish you attended was enough to describe where you lived. 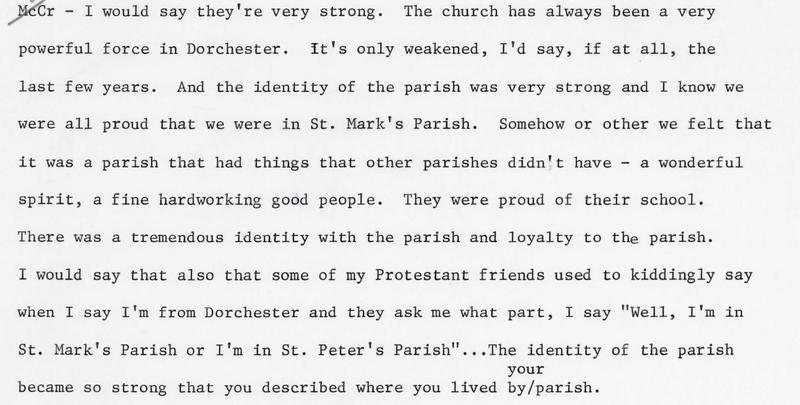 The rapid transit line in Dorchester can be seen under construction in the image below.

The introduction of rapid transit made it possible to keep industry out of Dorchester, save for a few small businesses. See below for a look at the rapid transit map of Boston from the 1930s.

The interviewer notes the areas of Shawmut, Ashmont, Codman Square, and Ashmont Hill as staying totally residential except for small business areas. All three men agree that the introduction of the rapid transit system led to further development of Dorchester. Mr. Paget confirms that the residents of these neighborhoods were very against the encroachment of industry.

Ashmont Hill was a particularly wealthy area of Dorchester. Jack McCready remembers how most of the families living there owned horses. Mr. Murphy and Jack McCready discuss how Ashmont Hill used to be the location of summer homes for the very wealthy in Boston.

When asked what they used to do as children, Jack McCready remembers watching the horses from Ashmont Hill race. In particular, he recalls a Mr. Gallup who was a member of the Dorchester Gentlemen’s Driving Club and had a horse named Ashmont.

The Lower Mills is one area of Dorchester that was shaped by the presence of heavy industry. This industry included a chocolate factory. Jack McCready remembers the old chocolate mill and claims it was the first in the country.

For Mr. McCready, Mr. Murphy, and Mr. Paget, Dorchester felt removed from the city’s downtown when they were growing up. Most of the neighborhoods of Dorchester were very opposed to heavy industry, which contributed to the suburban feel. Jack McCready recalls the best things about growing up in Dorchester.

All three men grew up and spent their lives in Dorchester. Even after decades, they all agreed it was the best place to live--its convenience to the city as just one reason.  Jack McCready and Mr. Paget can find no reason to leave their beloved neighborhood.

This is just a sample from their rich 47-page interview. Dive into the rest of the interview!