BOSTON - Tuesday, September 17, 2019 - Mayor Martin J. Walsh today joined the community development agency Urban Edge, elected officials, community leaders and neighbors to celebrate the opening of the Walker Park Apartments and Delphine's Courtyard, consisting of 49 units of affordable family housing and a pocket park in Egleston Square. The City of Boston's Department of Neighborhood Development and the Community Preservation Fund provided more than $2.8 million in total for the new homes and courtyard.

"Today we celebrate the creation of 49 new affordable homes, a crucial step forward in our goal of preserving our neighborhoods," said Mayor Walsh. "Along with our partners, the City of Boston is making big investments in Egleston Square, increasing opportunity for families and helping us keep housing affordable and accessible. I want to thank Urban Edge and everyone involved in this project for their work in making these new affordable homes possible." 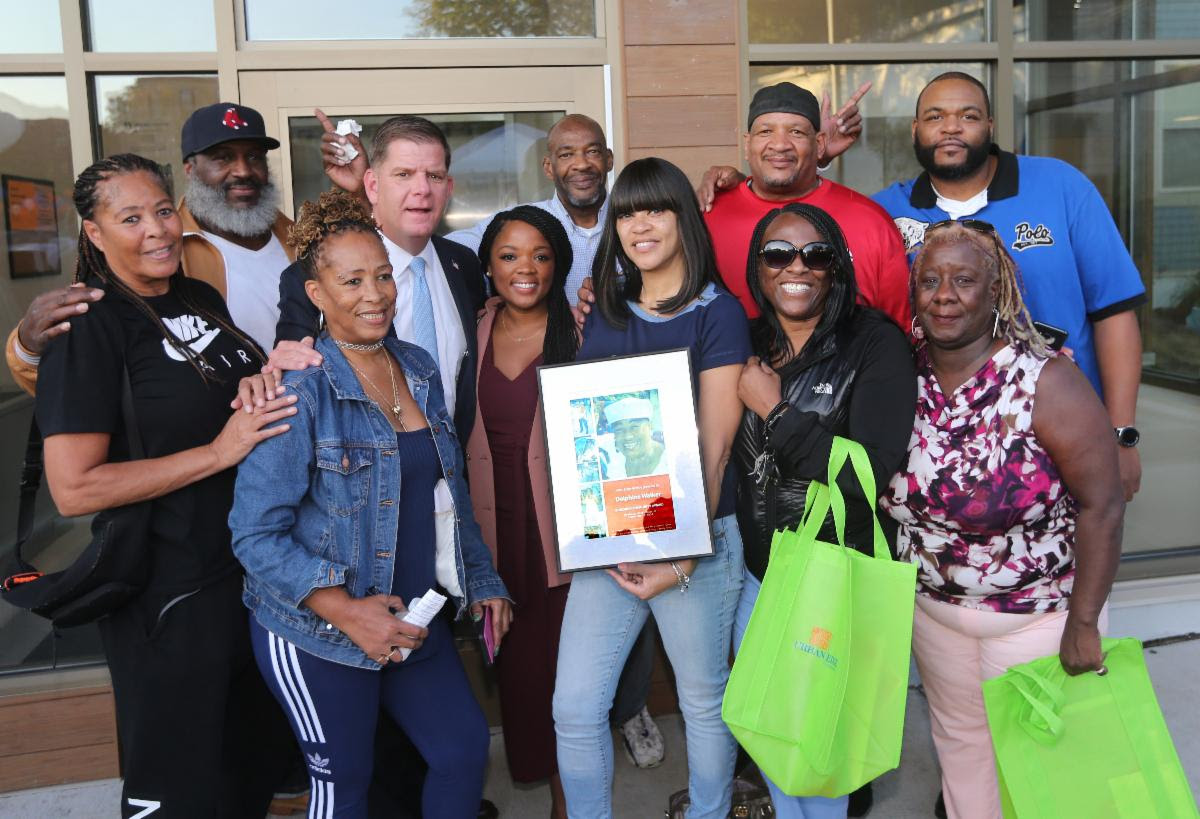 Mayor Walsh with members of the Walker family.

The Walker Park Apartments redeveloped three formerly vacant or underutilized parcels adjacent to the Egleston Square Branch of the Boston Public Library and in the Egleston Square Main Street District. The development is named for longtime community activist Delphine Walker, whose home stood on one of the development sites. All of the 49 new apartments have been rented to households who earn at or below 60 percent of the Area Median Income (AMI), including eight apartments reserved for families earning 30 percent of AMI or below.

"Urban Edge is proud that we have led investment in Egleston Square and is doing so in a way that honors the neighborhood's past while providing more opportunities for quality housing for members of the community," said Natacha Dunker, president of Urban Edge's Board of Directors. "We are so grateful to Mayor Walsh, the Department of Neighborhood Development, and all of our funders for their support of this important project."

"Today, we celebrate another victory for our city and community: new construction of 49 income-restricted units and 34 off-street parking spots," said State Representative Liz Malia (D-11th Suffolk). "This is exactly the type of housing we need to build in Boston and specifically in the Egleston Square Neighborhood. The face of our community depends on it, and I'm  grateful to Urban Edge and the City for having the long-term vision to realize this project and others like it."

"My mother bought her home in Roxbury at a time when many people were not making investments in this community, and she worked with others to strengthen Egleston Square as a neighborhood," said Pamela Walker, daughter of Delphine Walker. "We are so grateful that Urban Edge has honored her by naming both the apartment complex and the courtyard after her."

"Since I moved to Walker Park, my life feels different. I can see how my children always have a smile on their faces," said Cassandra Amazan, a resident of Walker Park Apartments. "It was a great feeling seeing them choosing their own room and making plans of how they would decorate them. It is not only about having or walking in to my own apartment now, it's about feeling accomplished in many ways and that this is opening new doors for me and my family."

The Walker Park Apartments have been made possible by funding from the City of Boston, and State and Federal Low Income Housing Tax Credits from the Commonwealth's Department of Housing and Community Development (DHCD). Financing team members also included Bank of America Merrill Lynch, Brookline Bank, the Community Economic Development Assistance Corporation, MassDevelopment, MassHousing, Massachusetts Housing Investment Corporation, Massachusetts Housing Partnership, US Bank Corporation, and the US Department of Housing and Urban Development.