What is a reward in Ms. Gray’s Tea-kwon-do class? Hot Cocoa

The Specialty Fair, which happens four times a year, is a reward system that a team of educators have developed to incentivize students at Maurice J. Tobin K-8 School.

Hot cocoa making, watching a movie and eating popcorn, playing Zombie games, and other fun activities serve as an incentive for students in their classes. The initiative was piloted in fall 2018 after specialty teachers, together with the school’s principal Mr. Toledano, brainstormed ways they could both incentivize and reward students. “After experimenting with a point system, and 'doing-well' folders, we decided to try out a version of a 'green-yellow-red' classroom behavior chart that many elementary teachers use in their classes," explained Ms. Barry, the Art teacher. And it works — the majority of students strive to excel in their classes, so that they can be on the “green” list and can participate in the Specialty Fairs.

My FoodCorps AmeriCorps year of service with Tobin K-8 School began this fall, and on Thursday, October 31, I participated in my first Specialty Fair — the first one of the academic year. In the first week of school, Ms. Rosa, the PE teacher, suggested having a Harvest Fest theme for the Specialty Fair, and announced she would dress up during the Specialty Fair as a fruit or vegetable. As a newcomer to the school, I certainly did not foresee that coming, but was very excited for the event. 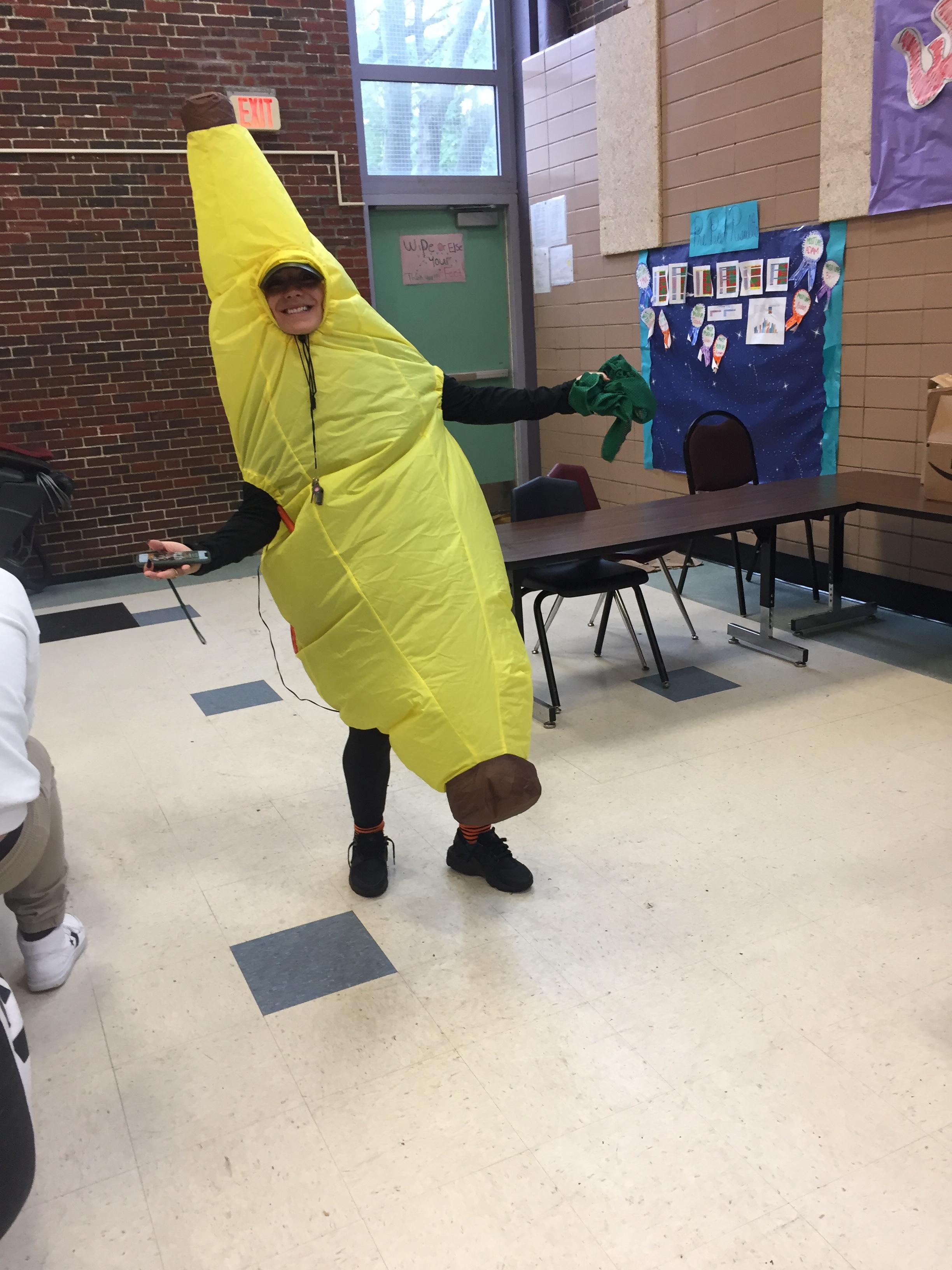 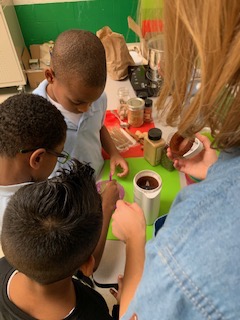 I co-teach food, nutrition, and gardening-based lessons, and considered several food-themed activities for the Specialty Fair. For the day, we decided that I would lead a pumpkin pie spice hot cocoa activity, the name of which was upgraded to “Pumpkin Pie Spice and Everything Nice.” My activity complimented others for the event, including zombie games, pumpkin painting, scary art making, and martial arts. “Pumpkin Pie Spice and Everything Nice” had two parts:

To make the mixing of the spices more educational, I brought ground cinnamon to use for mixing and rolled cinnamon tree bark sticks for exploring the source of the ingredient via touch and smell. Similarly, we had ground nutmeg and whole nutmeg, ground ginger and fresh ginger root, and dried cloves and a coffee grinder to grind them up. 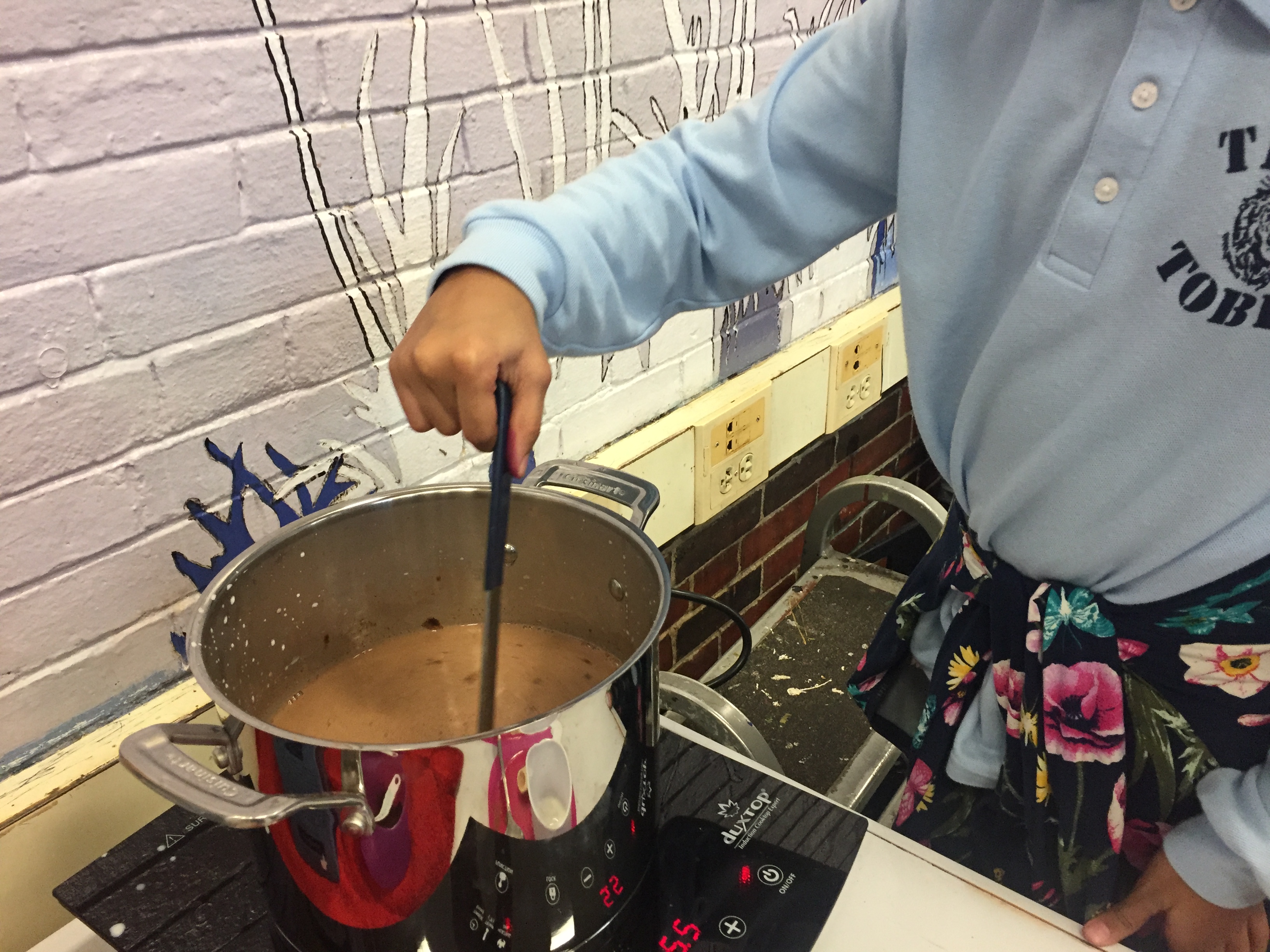 Afterwards, the exciting hot cocoa making part began. On the portable hotplate, I set a pot and invited each student to pour 3/4 to 1 cup of oat milk. Then, each student added 1/4 of a tablespoon of their pumpkin pie spice mix to the pot and 1-2 tablespoons of hot cocoa powder. We turned on the heat, and not too much later, the lovely scent of pumpkin pie spice filled the air. While we waited for the hot cocoa to heat, I invited students to do some pumpkin-pie-spice-themed word searches and coloring sheets. Ten minutes later, voila! Everyone was in a hot cocoa bliss. Over four class periods, with a total of 40 students from grades first through sixth, we mixed pumpkin pie spices and made and enjoyed hot cocoa.

This post was written by Anna Jacobs, a FoodCorps AmeriCorps Service Member at the Maurice J. Tobin K-8 School.