Artist Joe Wardwell is collaborating with poet Nakia Hill and youth from 826 Boston’s Youth Literary Advisory Board on this project.

The project will create a colorful, layered installation of poetry and Roxbury landscapes on three walls at the Roxbury Branch of the Boston Public Library. This will be visible from Warren Street.

This project is in the fabrication stage.

The total project budget is $250,000, including fabrication and installation. This project is the first of three site-specific projects by local artists that the City is commissioning for the branch and funding through the Percent for Art program. In addition to new commissions, the City also restored and reinstalled "The Word" by Vusumuzi Maduna and Obie Simonis onto the facade of the library.

This project complements the $17.2 million renovation of the branch, which included:

The Roxbury Branch, formerly the Dudley Branch, hosts a wide range of programs and activities for patrons of all ages. All of this was previously hidden behind glass block and concrete walls. The new large windows of the branch will now make this activity visible from the street. 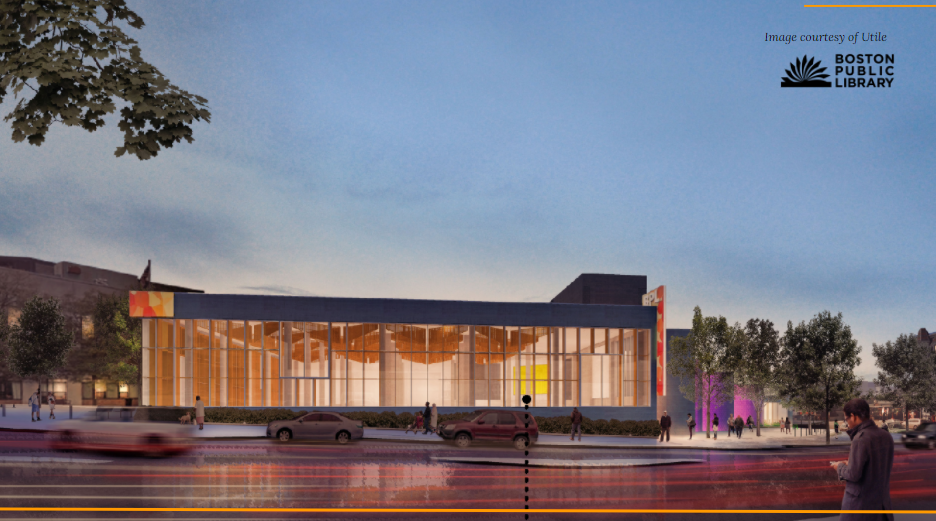 A relocated entry and plaza improvements along Dudley Street will also improve the civic presence of the library. This will help connect the library to the neighborhood and make it more welcoming.

The City identified a prominent clerestory site for the artwork. It is a large slanted concrete wall visible from many areas of the library, as well as from Warren Street at night. The clerestory is a distinct opportunity for public art in the space. This is due to its size and visibility throughout the first floor and from Warren Street. The project has since expanded to include two other adjacent wall panels in the main library space.

The commissioning process began with public meetings on what the neighborhood would like to see in the branch. From those meetings it was clear that there was a strong desire for public art that speaks directly to what it means to live in Roxbury.

The City incorporated the community’s desires into a Call to Artists in May 2018. Through a competitive proposal process, local artist Joe Wardwell was selected to interview by an Artist Selection Committee made up of arts professionals, many from Roxbury. The Art Commission awarded him for the project.

In thinking about how to approach the Roxbury Branch project, Joe Wardwell set out with some key goals for the design:

The redesigned space and a desire to include more work from local poets like Nakia Hill in the piece led Joe to propose an expansion of the project. His project now extends across the two side panels adjacent to the central clerestory wall.

The artwork is a combination of landscape, text, and abstraction combined through a layering process. The bottom layer will be a blend of colors with stenciled landscapes on top. Each image will be iconic viewpoints around the Roxbury neighborhood.

The second layer is an abstract layer. It responds to the architectural elements of both the original and redesigned branch. A color spectrum of gradient throughout the piece will mirror the gradient across the back of the library stacks. The wood diagonal baffles throughout the ceiling show up in the abstract design. The vertical columns of the space are also reflected in the vertical “bands” in the design.

The third layer is a layer of text. For this part of the project, Joe collaborated with poet, former City of Boston artist-in-residence (Boston AIR), and 826 Boston’s Writing Room Director Nakia Hill and the Youth Literary Advisory Board (YLAB). The collaboration will include:

High upon a Mission Hill projecting a bright beam of light

clinging to the essence of our communities”

-excerpt from A Nubian Notion by Nakia Hill