The proposed path would create a direct, off-road connection between Forest Hills Station and Roslindale Village.

This project would extend the Southwest Corridor path at Forest Hills Station into Roslindale Village via:

The project also includes a new gateway from Washington Street to Bussey Brook Meadow through the tunnel at the end of Arboretum Road. This will be constructed in 2021. This gateway and a path connecting it to the Blackwell path are funded by:

The MBTA is also a key partner. They removed a shed and debris from the tunnel area in anticipation of the new entrance. The MBTA will also be leasing the gateway area to the City for public access.

This is a priority project for Go Boston 2030. We’re working to create better and more equitable transportation choices in Boston. 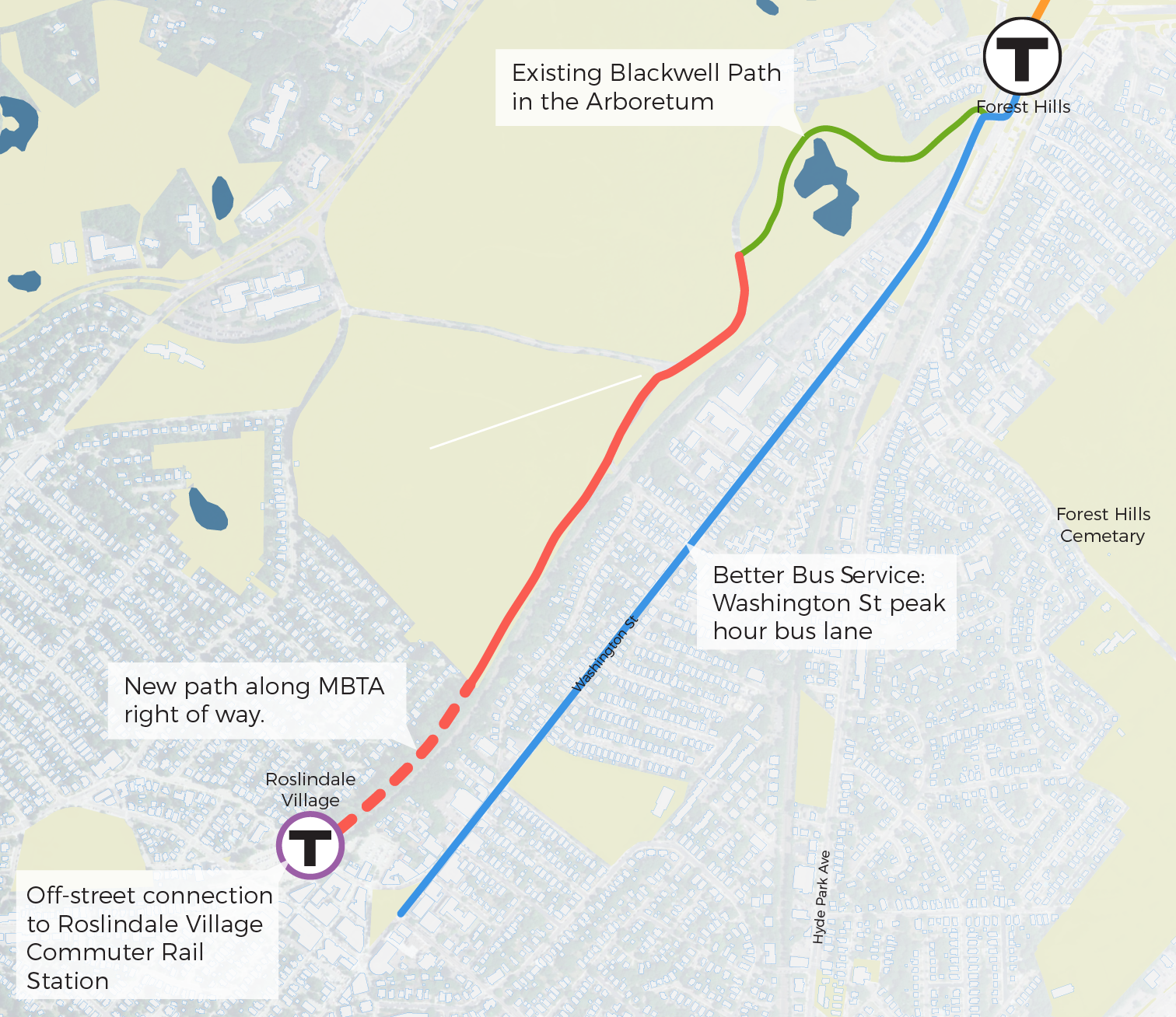 For several years, this project has been a priority for the Arnold Arboretum, the Arboretum Park Conservancy, the LivableStreets Emerald Network initiative, WalkUp Roslindale, and other Roslindale residents.

The Conservancy received a grant from the nonprofit Arnold Arboretum Committee. The grant funded a concept design for this path. The design went from the Blackwell Path to the Arboretum Road tunnel, and beyond.

The community group WalkUp Roslindale joined with the Arboretum Park Conservancy. Together, they worked to promote this path. They also promoted an extension of the path along the Needham line right-of-way to the Roslindale Square Station. The group received technical help from the nonprofit LivableStreets Alliance.

A community-led meeting engaged more than 100 residents. With support from the Solomon Foundation, the Arnold Arboretum hired design consultants. The Horsley Witten Group designers developed conceptual plans for the path.

The City of Boston received a DCR Trails Grant (now MassTrails) to design the new gateway from Washington Street to Bussey Brook Meadow through the tunnel at the end of Arboretum Road. City funds were also used for this design.

The MBTA removed a dilapidated shed and other debris from the end of Arboretum Road. This effort revealed the full arc of the stone arch surrounding the tunnel. The site was re-surveyed and the gateway design was modified to account for this change.