The City allocated more than $1 million to new murals as part of the third year of the City’s Transformative Public Art Program.

Mayor Michelle Wu and the Mayor’s Office of Arts & Culture, in collaboration with the Boston Art Commission, Boston Housing Authority, the Boston Public Health Commission, the Mayor’s Office of New Urban Mechanics, the Public Facilities Department, the Department of Youth Engagement & Employment and Youth Lead the Change, Hyde Square Task Force, and Street Theory, today announced the installation of 11 new murals throughout the City of Boston. The City allocated more than $1 million to new murals as part of the third year of the City’s Transformative Public Art Program.

“These new murals add so much to the city, and they are a wonderful reflection of the cultures and backgrounds that make our neighborhoods so unique,” said Mayor Michelle Wu. “I hope community members continue to be inspired by these beautiful additions to our streetscape.” 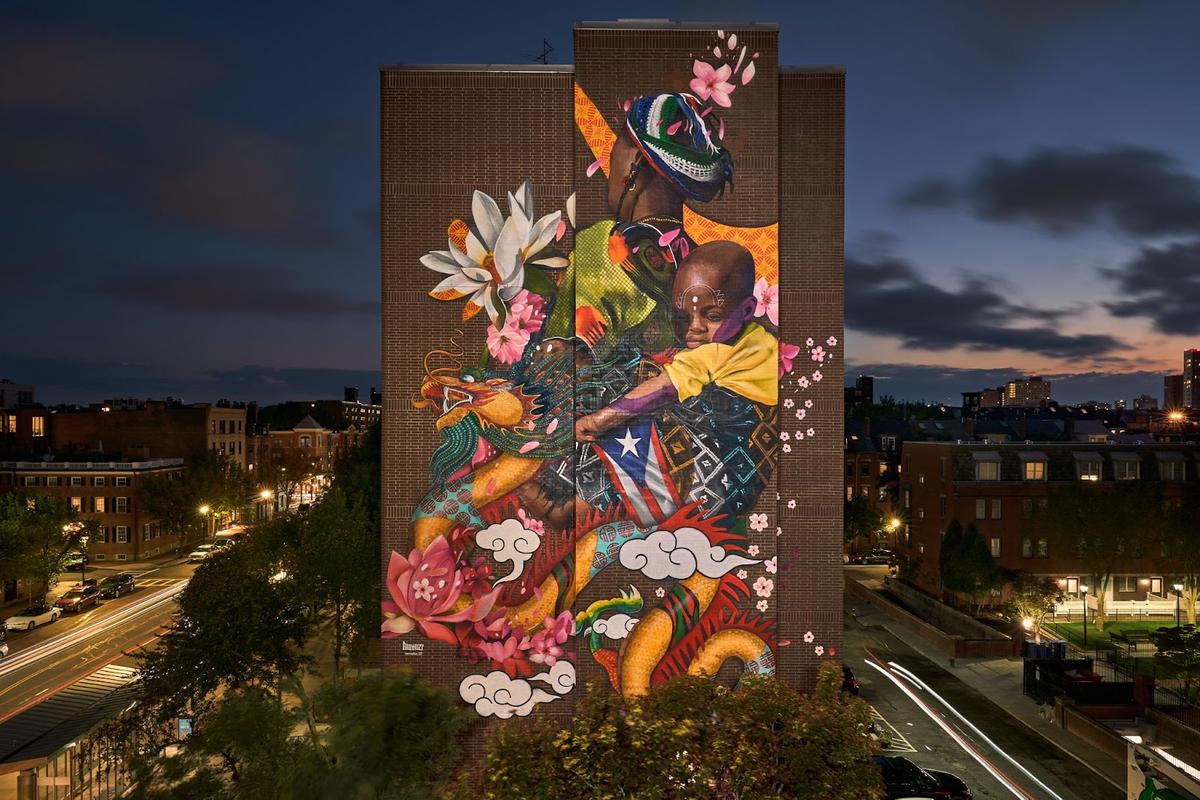 The City put out a Call to Artists for the Transformative Public Art Program that was split between mural commissions and grants for short-term activations and events. Artists were selected based on their prior experience making public art, their connections to the neighborhood and the themes of the program, and how well their proposals aligned with the City’s curatorial vision.

Through the program, the City commissioned murals across nine different neighborhoods, including:

Additionally, murals will be installed at the Faneuil Branch of the Boston Public Library in Brighton, the BCYF Shelburne in Roxbury, a community center in East Boston, and the Malcolm X Park basketball courts in Roxbury next year.

“It's been an honor working with the City of Boston and being a part of the Transformative Public Art Program,” said Victor "Marka27" Quiñonez. “I have already seen first hand the amount of happiness and inclusiveness the Souledad mural is bringing to the community. I'm especially looking forward to seeing more large scale murals and public art created in the South End and hope that this project inspires future generations to appreciate self expression and diversity for each other's culture.”

In addition to murals, the City of Boston also supported 27 short-term projects and activations with grants totaling $323,950 through the Transformative Public Art Program. Projects spanned a variety of disciplines that promoted joy, healing, and unity.

“This was an unprecedented investment in City-commissioned murals, and through the Transformative Public Art Program we are able to bring artwork to City buildings and in partnership with communities in a way that hasn’t been done before,” said Chief Kara Elliott-Ortega. “We’re excited to use this as a model going forward to foster more collaborations and creative opportunities throughout the city.”

“This program has brought incredible creativity and beauty directly into four BHA communities,” said BHA Administrator Kate Bennett. “The murals themselves are amazing, but they also serve to strengthen the link between BHA residents and the broader neighborhood.”

The City commissions murals, short-term public projects, and activations every year as part of the Transformative Public Art Program. The themes and structure of the program change with each iteration of the program, and this year’s focus was to commission public art projects in a variety of disciplines that promote joy, healing, and unity. The program included funding for murals, cultural events, and new media projects, among others.

To learn more about completed and ongoing public art projects in the City of Boston, visit boston.gov/public-art