Skip to Main Content
Bitter Cold in the Forecast
/
Mayor Wu declared a cold emergency in Boston from Friday, February 3, through Sunday, February 5, due to the extreme cold weather in the forecast. BCYF locations will be activated as warming centers on Friday and Saturday during their normal hours.
Learn more about the forecast
Last updated: 10/27/22

We commission several murals and temporary projects every year as part of the Transformative Public Art Program.

The City of Boston launched the third year of the Transformative Public Art program in 2021 as part of the Joy Agenda. 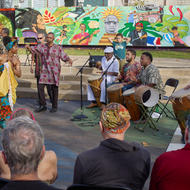 Celebrating You: The Mayor's Office of Arts and Culture's 2022 Year in Review 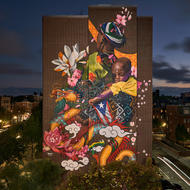 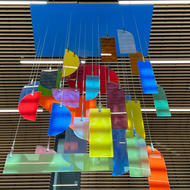 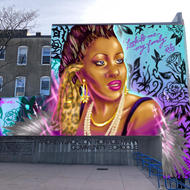 In 2019, we released a call to artists for the first round of the program. We were particularly interested in murals and temporary projects with:

We released a call to artists for the second round of the program in April 2020. That year, we were looking for artworks that respond to COVID-19 and provide creative approaches to public connections and community rituals at a time of disorientation and insecurity. We supported projects that were ready to be implemented immediately, and also supported the research and development of future projects.

Twenty-four projects were selected as part of last year's Transformative Public Art Program. In addition, two murals that were funded through the first year of the program were completed last summer.

We commissioned five temporary art projects in Grove Hall in 2017. These projects were part of a City-led initiative to improve the streetscape. We wanted to create an environment that is safe, convenient, and comfortable for pedestrians, cyclists, and motorists. The projects included:

For the third year, the program was split into three opportunities:

This was for artists interested in creating murals, who were flexible about location. Artists were selected based on:

The City then matched artists with a site. Projects include:

This was for artists interested in creating murals that are associated with specific themes or communities identified by the City. Projects include:

The City allocated more than $1 million to murals through Opportunities 1 and 2, and 11 were installed by fall of 2022.

This was for artists with a specific, short-term project and location in mind. Projects could include:

Brian Beyung with the Chinese Historical Society of New England

Received $5,000 for the performative project "desires not even our own".

Received $5,000 to create a sculpture project in the Back Bay.