These public art projects celebrate the beauty of the neighborhood, local heroes, and current residents.

Mayor Martin J. Walsh today announced the selection of five artists for a series of public art projects in the Quincy Street Corridor and Grove Hall Business District of Dorchester. Tied to a city-led initiative to improve the streetscape and create an environment that is safe, convenient and comfortable for pedestrians, cyclists and motorists, these public art projects celebrate the beauty of the neighborhood, local heroes and current residents.

"We are working hard to improve the overall experience of the streets of Boston for everyone," said Mayor Walsh. "Public art helps advance these goals by creating a strong sense of place while embracing the identity of the neighborhood. I congratulate all artists selected to participate in this effort, and I look forward to seeing the completed projects."

The public art projects aim to revitalize the urban landscape of the Quincy Street/Grove Hall Main Street area. Pedestrian travel and accessibility will be improved via temporary art and urban design interventions along Quincy Street and in the Grove Hall business district along Blue Hill Avenue. The designs were informed by community feedback.

The five artists selected include:

Chanel Thervil created an Affirmation Station, which is an interactive public art initiative that was designed to uplift people by gifting them with an affirmation pin to serve as a reminder of hope and positivity. The initiative was designed to start a chain reaction of random acts of kindness that can flow from one person to another. The installation is located at the corner of Quincy and Blue Hill Ave. 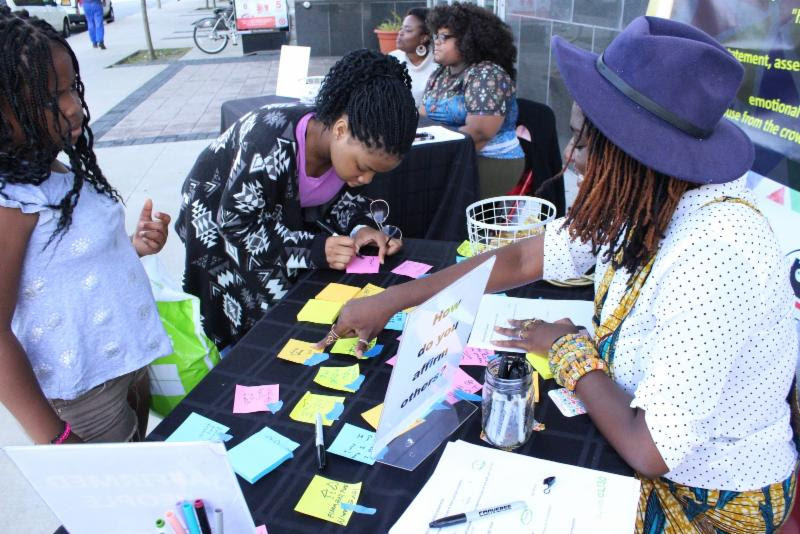 Robert 'Problak' Gibbs created a mural entitled "Afro Futurism/ Breathe Life." The design of the mural will give a nod to the past in order to breathe life into the future. The juxtaposition of an older pastime with youthful and futuristic imagery relates to the community's objective to revitalize the neighborhood while embracing and strengthening its past, present, and future identity and sense of place. The mural is located at the UCERM Empowerment Center at 324 Blue Hill Ave.

"Being Boston-raised, I wanted to pay respect and homage to areas that made me the artist I am today," Robert Gibbs said. "I graduated from the Martin Luther King Jr. Middle School that is literally down the street from the wall that I painted. I wanted to "Breathe Life" back into the neighborhood that helped me launch my gift into the universe. I developed an understanding of the need for positive messaging in our communities and my responsibility to produce artwork that could resonate with so many people, have visual impact, reflect the people of the area, and celebrate our history." 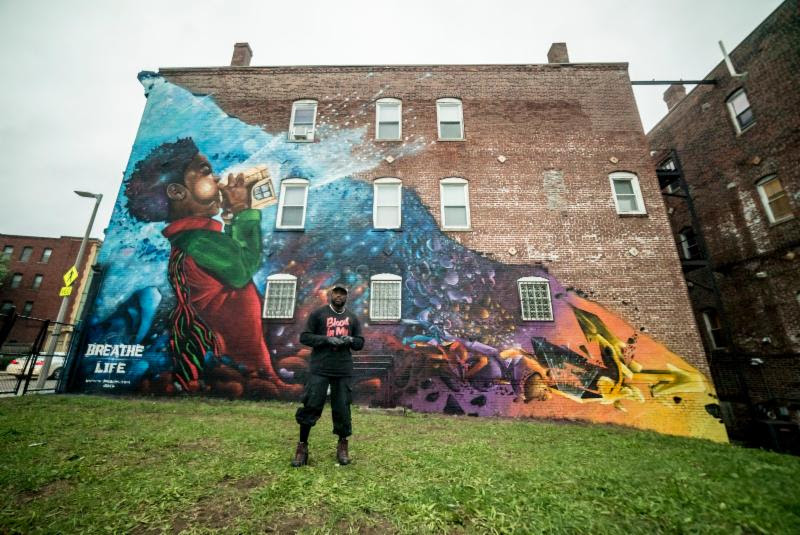 Laurence Pierce created "On the Shoulders of Giants," a mural to showcase the names and histories of the local men and women whose struggles and triumphs paved the way for today's young students. The project was led by Laurence with the collaboration and support from artists Percy Fortini-Wright, Ricardo Gomez and graphic designer Robert W. Murrell, Jr. The murals are located at the Grove Hall branch of the Boston Public Library. 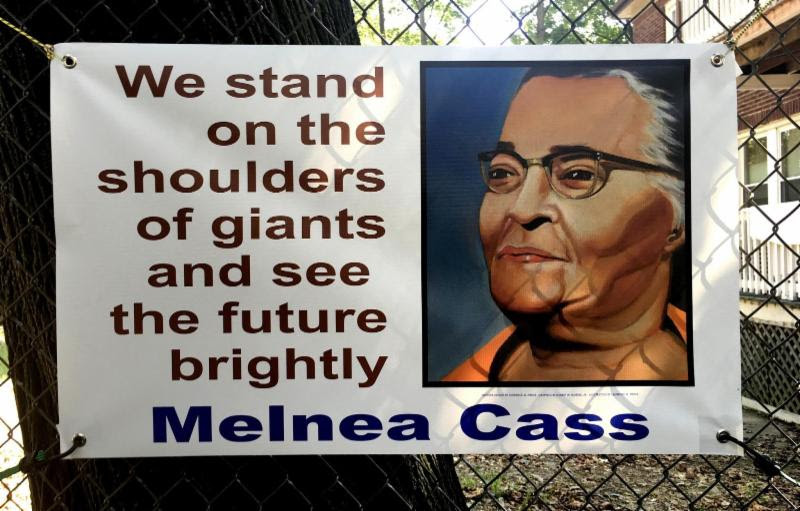 Photo courtesy of the artist.

David 'Don Rimx' Sepulveda created a mural inspired by the legacy of Nobel Peace Prize recipient, Nelson Mandela. Widely known and regarded as an icon of democracy and social justice, "Don Remix" hope is for Nelson Mandela's image to inspire all people - young and old and of all ethnicities, to actively seek knowledge, truth, and civic engagement as they visit the Grove Hall Public Library, drive past down Geneva Avenue, or make their way to the Jeremiah Burke High School. The mural is located at 41 Geneva Ave. 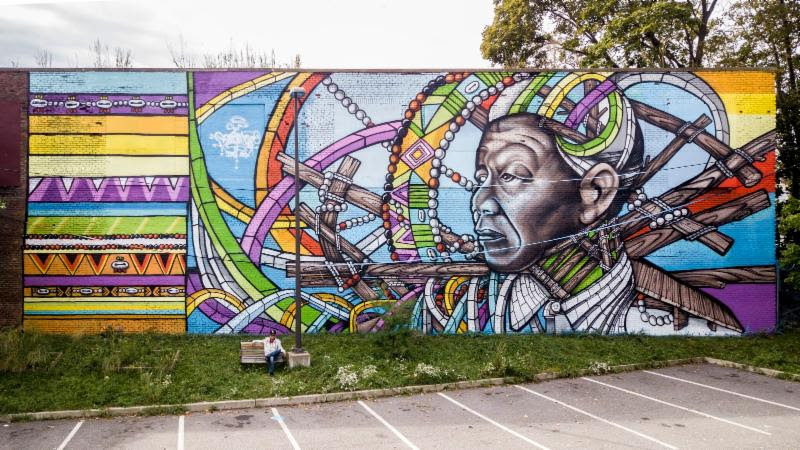 Victor 'Marka27' Quinonez, will create a mural titled "Sacred Health" that will intend to encourage humanity to respect one's mind, body and soul. According to Marka27, the heart in the mural represents the most important and vital organ that keeps people going, and also represents love. With Liza Quiñonez, Marka27 is a co-founder of Street Theory, a Creative Studio and Gallery. The mural's location has not yet been determined. The artists were selected by a committee comprising representatives from Department of Neighborhood Development, Boston Art Commission, Grove Hall Main Streets, and other community representatives.

This project is made possible through a Choice Neighborhood Initiative (CNI) Implementation Grant to fund improvements for public housing, the provision of services and case management for local residents, the enhancement of businesses and improvements to local playgrounds in the Quincy Street Corridor and the Grove Hall Business District.

In addition, the City of Boston's Transportation and Public Works Departments have recently taken several steps to improve safety and access on streets in the Grove Hall neighborhood.  These include:

The Mayor's Office of Arts and Culture's mission is to support artists, the cultural sector, and to promote access to the arts for all. The office houses the Boston Cultural Council, the Boston Art Commission, and the Poet Laureate program. Responsibilities include leading implementation of  the City's Cultural Plan, Boston Creates; managing the Boston Artist-in-Residence program (BostonAIR); curating exhibitions in City Hall; and operating the historic Strand Theater in Dorchester.  For more information go to: www.boston.gov/arts

About the Choice Neighborhoods Plan

Boston was one of five cities nationwide to receive the nation's first-ever Implementation Grants, which were awarded under the US Department of Housing and Urban Development's Choice Neighborhoods plan. This grant, submitted by the Department of Neighborhood Development on behalf of the City, allowed a coalition of City and community partners to work together to transform the Quincy Street corridor, including the redevelopment of the 129-unit Woodledge/Morrant Bay housing development, now renamed Quincy Heights.  The grant also funded significant improvements at community facilities, parks, and gardens, and funded programming for economic development, job creation, and asset building, including the  significant improvement of Grove Hall's WiFi. Key among the economic development activities funded by the grant was the redevelopment of the former Pearl Meat Factory into a 35,000-square-foot, multi-tenant, food production facility, now known as the Bornstein and Pearl Food Production Small Business Center.