We received 47 applications for the 2017 Neighborhood Slow Streets program. Using the objective criteria described in the application, we've selected five new communities to join in 2017.

We are pleased to announce the five communities who will join the Neighborhood Slow Streets Program in 2017:

View an interactive and labeled map of the proposed zones. 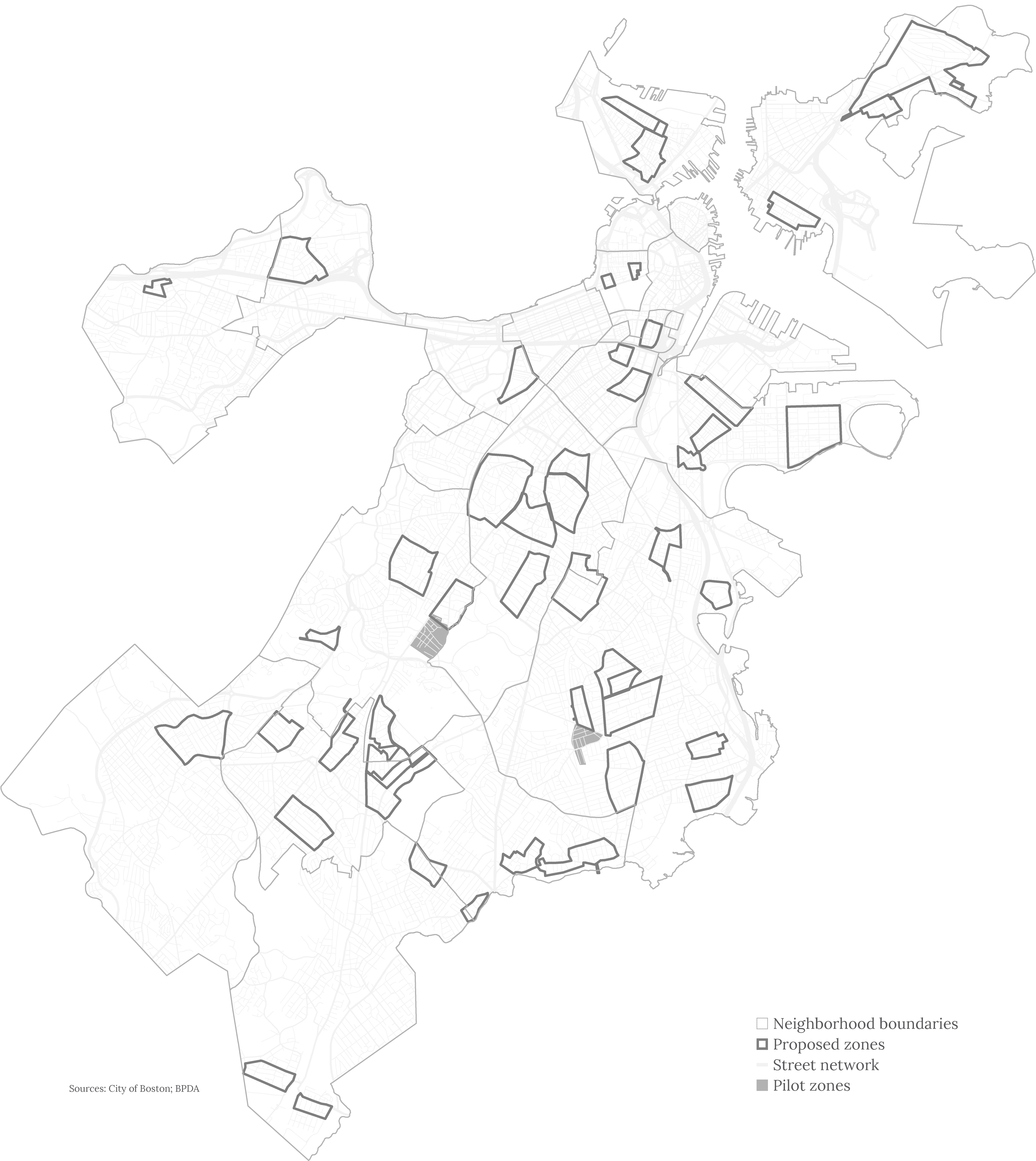 View an interactive and labeled map of the proposed zones.

The Boston Transportation Department received applications from 47 communities by the March 24 deadline. Several communities did not provide clearly marked maps of their zones, so we asked for clarification. Ultimately, three did not provide a map of a zone with boundaries; we were unable to evaluate their applications. Another three communities applied with non-contiguous areas. We evaluated each of those areas individually. As a result there are 47 separate zones submitted by 44 communities.

We assessed each zone using the objective criteria that were described on our web page and in the application materials. We expected that the higher-scoring zones would be those selected for the program. Our criteria were:

We then weighted the criteria, to emphasize locations with more children and older adults. The criteria related to strong boundaries, geographic diversity, and feasibility were held until we understood how the zones scored on the other criteria. 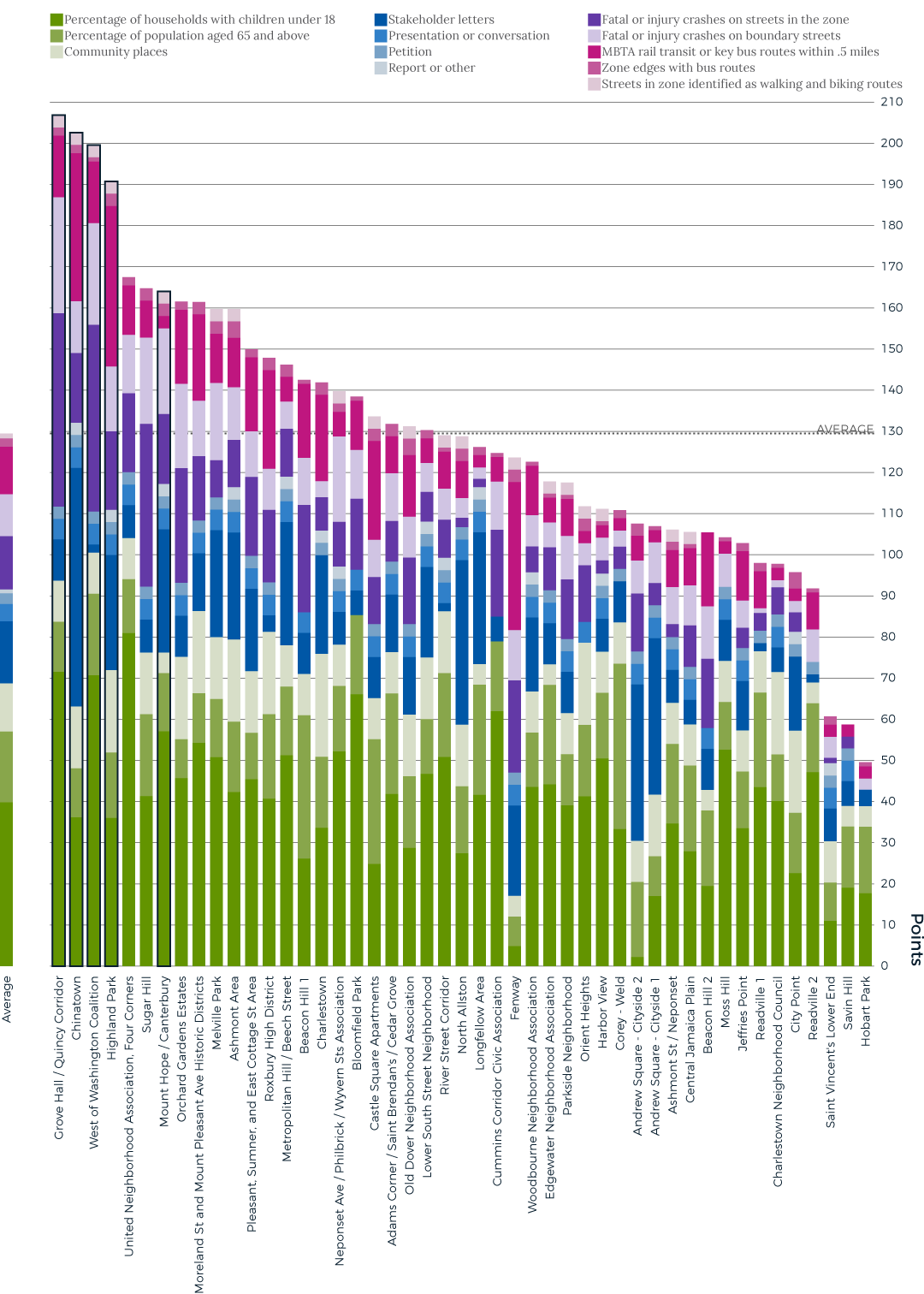 An additional $1 million in funding allocated by Mayor Walsh to this program meant that we could look to take on five new zones, rather than the two or three zones that we had originally planned to add. We reviewed each of the top-scoring zones in order, starting with the highest-scoring zone of Grove Hall/Quincy Corridor. Finding no conflicts or potential issues with feasibility, we felt that each of the top four should be part of the 2017 Neighborhood Slow Streets program. Once we determined that, size played a significant role in our selection. With the available resources, our fifth zone needed to be more similar in scale to the pilot communities. Moving down the list, the Mount Hope/Canterbury zone was the next-highest scoring area and so was invited to participate in this year’s program.

*Note: This document is not intended for printing. If you need to print any of the pages, use one of the documents provided in the "Print" section of this page.

We anticipate planning work to begin in the five new communities by early fall. The Neighborhood Slow Streets process calls for a community walk to kick off the process. Residents will have the opportunity to identify key challenges and areas where they would like to see changes. When completed, the selected Neighborhood Slow Streets zones will be equipped with visual and physical cues to slow drivers to 20 mph, making each street feel more inviting for people of all ages who are walking, playing, or bicycling.

We anticipate opening the application period again in the winter.  We will work to streamline the process for communities that applied but were not accepted this year.

Construction in our two pilot communities, the Talbot-Norfolk Triangle in Dorchester and Stonybrook in Jamaica Plain, is anticipated to begin in August or September 2017. We’re excited to implement traffic-calming in these areas and begin an evaluation to understand the effectiveness of the tools deployed there.

The methodology document is best viewed on a computer. You can download a PDF (18.9 mb) of the methodology and score sheets to view on your computer. If you need to print the documents, we've provided links to files that can be printed on 8.5 x 11-inch paper. If possible, please print double-sided.

This folder contains an individual score sheet for each proposed zone.