After more than two years of work, you can order City of Boston birth, marriage, and death certificates online.

We did it, folks! With the recent release of our marriage certificates application, we’ve successfully moved all requests for Registry Department vital record certificates — birth, marriage, and death — online. Instead of coming into City Hall or breaking out your stamp collection, you can order from home and receive a certificate in the mail. At just $14 per order, plus a minor processing fee, we’ve been able to not only make our certificates accessible, but also more affordable.

Thanks to our previous work on birth and death, we took much of the code from those applications to re-use it for marriage certificates. But, marriage had its own specific issues we needed to address. 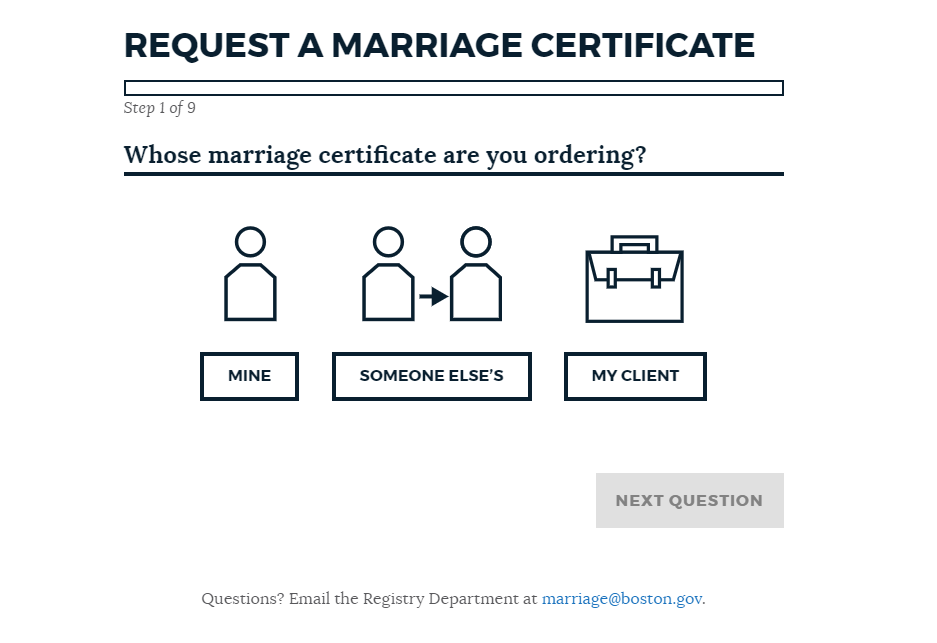 Why we tackled this project

While we were excited to finish off the Registry’s full suite of services, moving marriage certificates online also had a number of added benefits. As with birth and death, there was an online option through the state to order marriage certificates. But, orders cost $42 and up, and certificates weren’t available until six months after the marriage date.

As with our other applications, we were also looking to create a more efficient system for the Registry Department. Instead of sifting through the mail and managing in-person orders, our online system would allow Registry staff to quickly process requests. Our goal is to save the Registry Department money and time, time that could be used helping those with special needs, or other projects to make its department even more efficient.

And, just like with birth certificates, we knew the demand for marriage certificates would be on the rise thanks to the REAL ID Act. The federal act mandated an “enhanced driver’s license” be issued separate from standard licenses to citizens. You’ll soon need either this enhanced driver’s license or a passport to enter certain federal buildings and to fly in the United States.

After the REAL ID requirements were announced in March 2018, the Registry Department saw a 30 percent spike just with birth certificate requests. If you changed your name after you were married, you’re also required to show the Registry of Motor Vehicles your marriage certificate to verify that name change.

Let’s face it, some people have trouble remembering their exact marriage date (we’re not pointing any fingers). In talking with Registry staff, we realized how important it would be to allow users to add a date range. The Registry Department receives calls all the time from people needing help finding the date of their marriage. Limiting a person to a single date could easily return no results and create a lot of frustration. By adding a date range, we would help cut down on phone calls, all while creating a more friendly experience for our users. 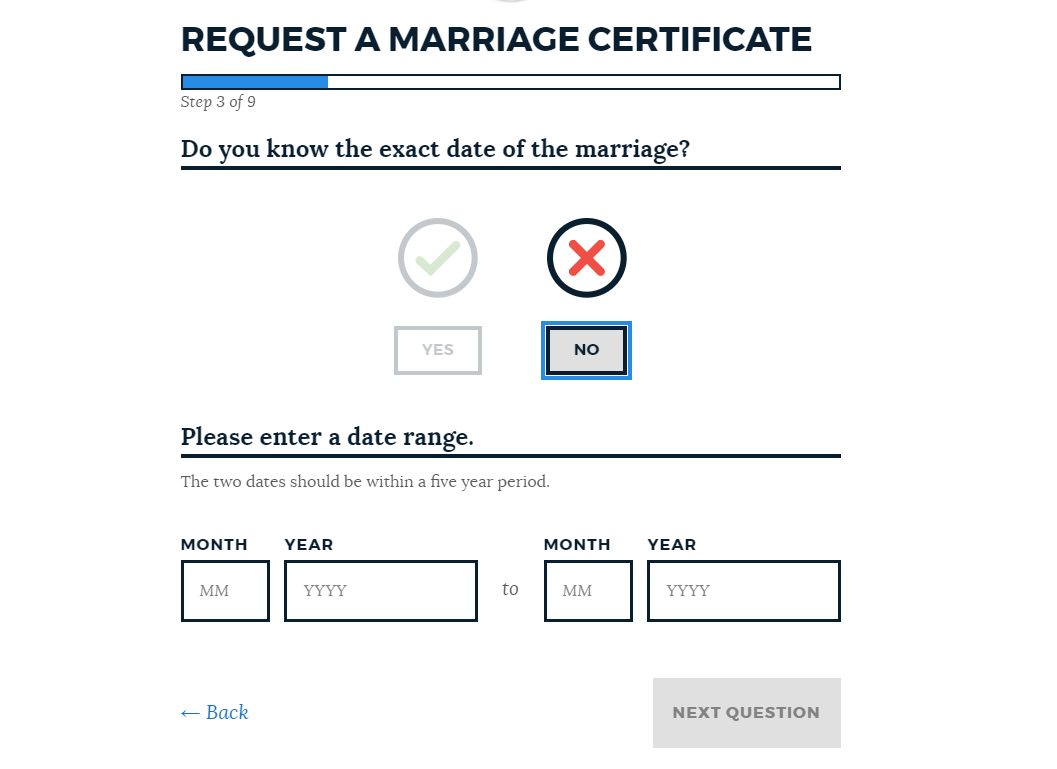 One other issue to address was the use of names. Registry staff often receive calls from folks using alternate spellings, making it tough to track down their records. In our online application, we wanted to give users the option to include extra information, including any alternate spellings of names.

Getting feedback from our users

We had some initial ideas, but we wanted to make sure to user test our new application as soon as possible. To do this, we created five versions of the application, each with slight variations, and brought them down to the Registry windows to get real-time feedback from users. We also tested with users just outside of City Hall at Patios.

After looking at the results from testing, it was clear that we were going to need to use progressive disclosure for adding the date. Progressive disclosure means we give our users just enough information to move forward with the task, without bogging them down with other — potentially confusing — details. We chose to do this because there was still confusion about what to do if you didn’t know the exact date. Using progressive disclosure allowed us to break down the process to funnel people in the right direction. If they know the specific date, they can enter it. If not, we give them the ability to input a range.

We also decided to put an alternative spelling box, with the option of adding more than one, on every page where you enter a name. This box allows people to enter any other spellings that might exist for their names. Our first two days of testing revealed that most people were able to add that extra information with ease.

After receiving that initial round of feedback, we made updates to the form and performed a second round of testing. We focused on two things: our progressive disclosure process for the date and our alternative names box. Thanks to some more explicit instructions, this round of testing went very well, confirming our suspicions about how best to display information. We decided to incorporate both features for the date and name fields into the final version of the application.

We cannot thank the Registry Department enough for their support throughout this process. Registrar Patty McMahon and her staff were with us through every step of the development of our online applications, and we would have been lost without them. They’ve also done an amazing job in spreading the word about online requests.

If you have some time, please check out our birth, marriage, and death certificate applications. These are by no means finished products, and we plan to continue to iterate and improve them over time. We’d love to hear what you think — just email feedback@boston.gov.

This blog post was written by Sarah Greisdorf, a summer content fellow for the Digital Team. She's currently a junior at Boston University, where she's studying computer science. Connect with her on LinkedIn.