Before the construction, the Higginson School was one of two Boston public schools without a playground. The new outdoor play space is the first BPS playground constructed with Community Preservation Act (CPA) funds, through a $500,000 grant recommended by Mayor Walsh in 2018. 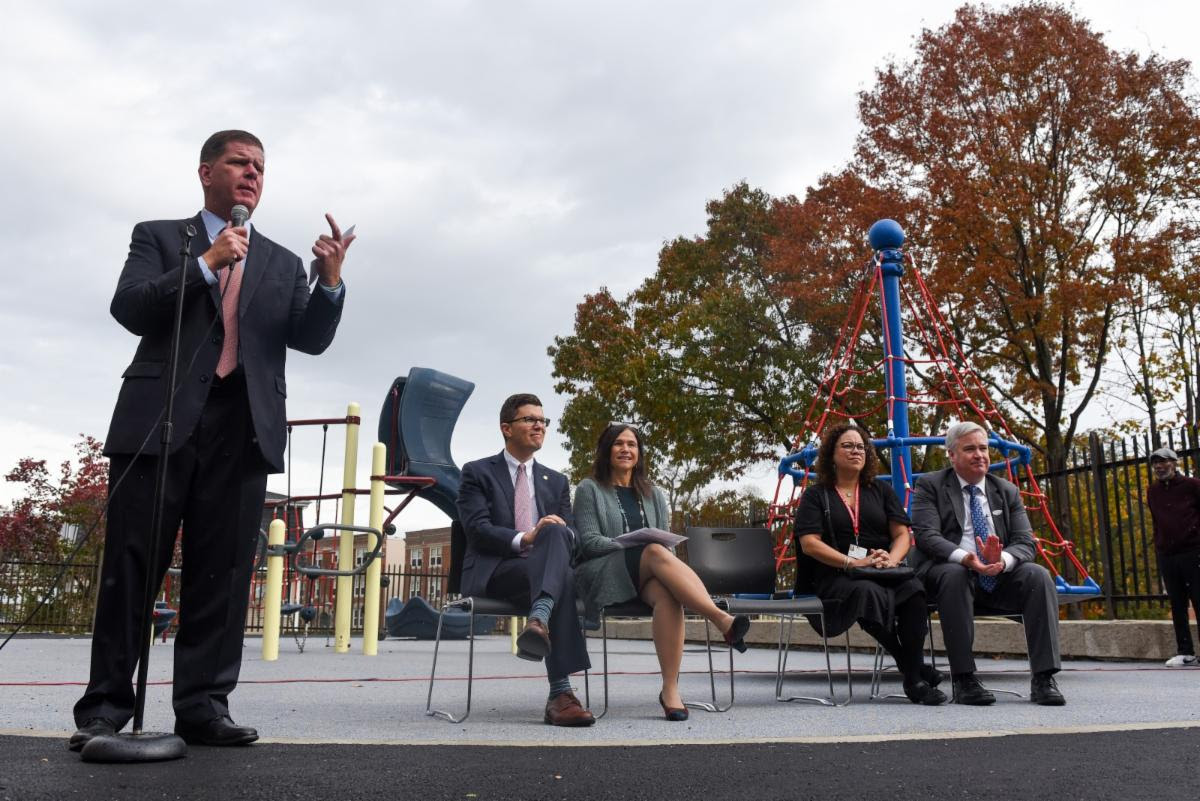 The project was the result of advocacy from parents, school staff, community partners, and students, who contributed design ideas. Students and families attended a Boston School Committee meeting to advocate for a playground and participated in a subsequent Boston City Council hearing discussing the slate of recommended CPA projects. The project was a public-private partnership between the City, BPS, and Higher Ground, and received unanimous support from the outset from Community Preservation Committee members.

"The Higginson is a great school community that reflects the values we believe in the City of Boston," said Mayor Walsh. "This school is dedicated to inclusion, and this playground reflects that value by being accessible to different ages and different abilities. This is exactly the type of improvement in our infrastructure that Community Preservation Act funds are intended to provide."

The school's previous outdoor space consisted solely of a cracked, uneven concrete surface in need of repair. The new playground is two-tiered with each level supporting play for students of different ages. There are structures on both tiers, including rubber-surfaced play areas, slides, climbing ropes, modern seesaws and an adjustable basketball hoop with a paved court.

The Higginson School serves pre-Kindergarten through second-grade students with and without disabilities in a fully inclusive setting. The new outdoor space has features including a ramp connecting both levels of the playground to make the area accessible for all students.

"All of our students deserve an outdoor space where they can engage in physical activity and have fun with their peers," said BPS Superintendent Brenda Cassellius. "I'm so appreciative of our community and City partners who collaborated with students, staff and families to bring the school community's vibrant ideas to life. Student voice and community preservation are incredibly vital, and I thank the City of Boston for making both a priority."

During the event, it was announced that a proposal will be set forth to the Boston School Committee to dedicate the playground to retiring Higginson School Principal Marie Mullen. Mullen is stepping down as school leader after more than 35 years of service to the BPS community. She has held various BPS roles, including teacher and director of instruction, at multiple BPS schools including the Mozart Elementary, Trotter K-8, and Haynes Early Education Center. She was previously the principal of the now-closed Fifield Elementary School in Dorchester.

"It's always wonderful when we can provide our youth with a new addition to their school building that was designed with their own ideas in mind," said Boston School Committee Chairperson Michael Loconto. "I thank Principal Marie Mullen for her decades of service to the BPS community and I am so glad that we were able to celebrate this playground, the school community, and her leadership ahead of her retirement."

The Community Preservation Fund is capitalized primarily by a one percent property tax-based surcharge on residential and business property tax bills that began in July 2017 after voters adopted the measure in November 2016. The last round of CPA awards in February 2019 funded $34 million to projects across the city, including affordable housing developments and programs, parks and open space, and historic preservation projects consistent with statewide guidelines.

As part of his 2019 legislative agenda, Mayor Walsh has been advocating for adjusting the surcharge on fees for recording deeds to increase the State CPA match, protecting the Act that more than 170 cities and towns depend on for the creation of affordable housing, open space, and historic preservation. When municipalities voted to enact CPA, they did so with the promise of a substantial state match. This year, the match was just 11 percent with a one-time surplus allotment added, but the CPA bill people voted for is no longer the same bill. The FY20 State budget increases the match, raising an estimated additional $36 million in revenue, putting the state match at around 30 percent and allowing us to invest more in our communities.

The Boston Public Schools (BPS), the birthplace of public education in the United States, serves nearly 55,000 pre-kindergarten through grade 12 students in 125 schools. BPS is committed to transforming the lives of all children through exemplary teaching in a world-class system of innovative, welcoming schools. We partner with the community, families, and students to develop in every learner the knowledge, skill, and character to excel in college, career, and life.

About the Community Preservation Act (CPA)