The City of Boston, in collaboration with A Better City, has released the results of a survey conducted to better understand how COVID-19 has impacted commuting choices before, during, and in the anticipated future beyond the current pandemic.

The City of Boston, in collaboration with A Better City, has released the results of a survey conducted to better understand how COVID-19 has impacted commuting choices before, during, and in the anticipated future beyond the current pandemic. Outreach for the survey was done to over 4,200 office, university, and hospital employees. To read the report on the results of the survey, visit our survey website. 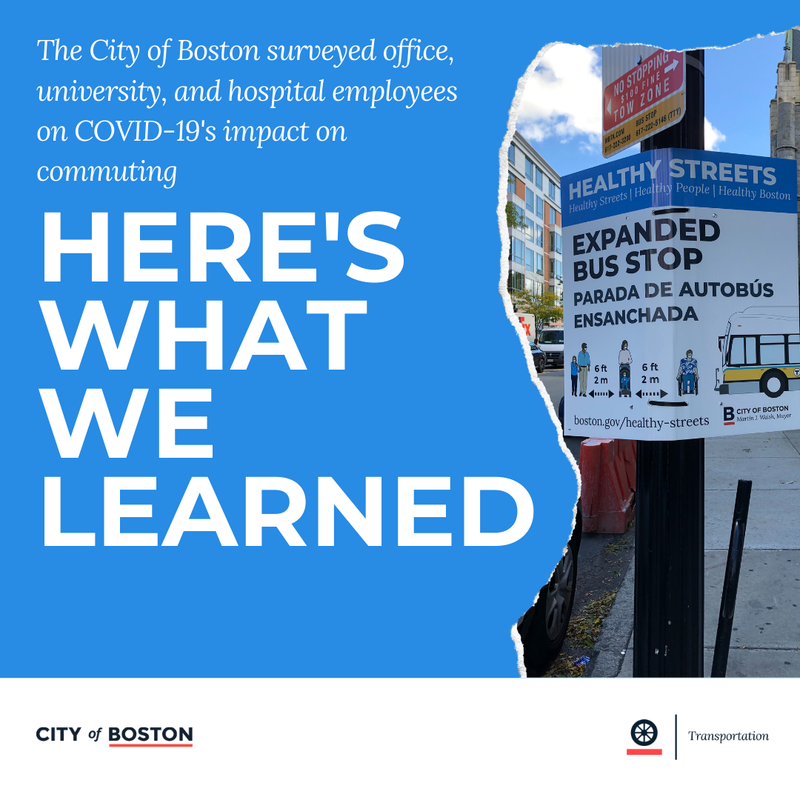 A majority of the survey responses indicated a plan to return to pre-pandemic commuting choices. Of those who did plan to switch, more plan to switch to driving alone than any other mode. 92% of survey respondents did not have plans to purchase a new vehicle and just roughly half of commuters did not have plans to change their current sustainable mode of commuting. When asked, over half of respondents stated they are not comfortable taking a rideshare trip (e.g. Lyft/Uber). While more than 80% of respondents reported a desire to telework more than they did before the pandemic, only about 20% want to telework full time after their workplaces fully reopen.

Of the 1,086 respondents who indicated that they plan to switch to a new mode of transportation when their workplace fully reopens, 12% chose cycling as the new mode they plan to try – the highest proportion among all sustainable options. When asked to select the top three things that would help potential future bike commuters in making it easier to ride a bike, 59% stated dedicated bike lanes, 50% wanted more off-road bike paths, and 41% wanted prioritized road space for bikes.

When we asked current and future drive alone commuters what would encourage them to use a more sustainable mode of transportation, 45% said free or reduced MBTA passes would get them to make the switch.

“The survey highlights the importance of our Healthy Streets program to support a healthy reopening and an equitable recovery,” said Chief of Streets Chris Osgood.

Many of the survey results show that ongoing initiatives by the Boston Transportation Department (BTD) are pointing in the right direction to encourage sustainable commuting. Mayor Walsh and the City of Boston have advocated against recent cuts to MBTA service, and continue to make transit improvements that promote the health, equity, and future of Boston’s communities. This includes installation of new bus lanes and over seven miles of a connected network of protected bike lanes through the Healthy Streets program. Finally, the City will work with large employers to commit to programs that prioritize financial incentives for transit and bike share riders upon return to the workplace.

The survey was developed and distributed in collaboration with A Better City (ABC). ABC is a private, nonprofit organization made up of employers, institutions, building owners, and property managers working together to advance employee transportation options, improve air quality, and reduce traffic congestion. For this project, ABC worked with their members to distribute the online survey to employees via email.

"For those workers and companies surveyed about a post-pandemic return to the workplace, transit is still a desirable choice for more than half of respondents," said Rick Dimino, President and CEO of A Better City, speaking about the deep link between transit service and economic recovery. "If workplace returns track at high levels going into summer and fall, it’s the worst time to be cutting MBTA service. It would be bad for the economy, bad for congestion, and bad for the environment."

The 20-30 question survey, depending on skip logic, received responses from early August through September and was available in 5 languages including Spanish, Haitian Creole, Traditional Chinese, Vietnamese, and Cape Verdean Creole. The survey was advertised on City of Boston social media and communication channels. To incentivize respondents to complete the survey, 20 Bluebikes monthly memberships were available on a raffle basis.

Boston is one of the 25 winning cities in the Climate Challenge, which is helping cities set and surpass ambitious climate goals by ramping up action in the two highest-emitting sectors in cities: transportation and buildings. Transportation accounts for nearly a third of Boston’s total carbon emissions, most of that from private vehicles that run on gasoline. As a regional hub, Boston draws hundreds of thousands of commuters daily. Because of this dynamic, three-quarters of transportation emissions come from travel between Boston and its suburbs.

To read the report on the results of the survey, visit our survey website.