Mayor Martin J. Walsh on Saturday joined Mission Hill Neighborhood Housing Services (MHNHS), elected officials and residents to celebrate the grand opening of One Gurney Street. This once vacant property is now a transit-oriented, mixed-use development that offers 40 units of affordable family housing, a new office headquarters for Metro Housing Boston, and four community-oriented retail storefronts including a new Eastern Bank branch. This is the first phase of the redevelopment of Parcel 25, the Mission Hill community's plan to revitalize Roxbury Crossing. 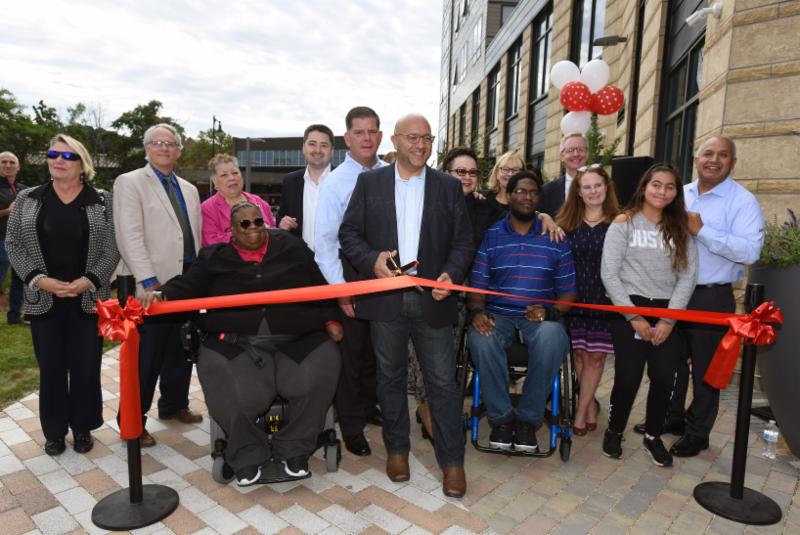 "Today we celebrate a significant milestone reached as we break ground on this project at Parcel 25 that will bring affordable housing and public benefits to Mission Hill community members," said Mayor Walsh. "I'm proud of the work that all partners have done to create dozens of affordable homes for workforce families, formerly homeless individuals, and persons with disabilities. This mixed-use development will continue keep this neighborhood a strong and vibrant place for generations to come."

Phase 1A of the Parcel 25 redevelopment represents the culmination of more than a decade of planning and hard work by MHNHS and the Mission Hill community to restore the land formerly owned by the MBTA. The Maria Sanchez House, located just across Gurney Street from Parcel 25, was the first building to be developed as part of the community's vision to revitalize the area. The Maria Sanchez House, completed in 2015, offers 40 units of affordable housing for seniors.

"We like to say it takes a village to develop affordable, neighborhood-stabilizing housing. Never has this been more evident than our efforts to redevelop Parcel 25," said Mission Hill NHS Executive Director Patricia Flaherty. "Not only were hundreds of our neighbors involved in the dreaming, the planning, and the advocacy, but almost as many funders were committed to making the community's plan a reality, led by the City's Department of Neighborhood Development and the MA Department of Housing and Community Development. Today we are grateful for all those involved in the Parcel 25 Phase 1A/One Gurney Street project and officially welcome Metro Housing Boston staff and clients, Eastern Bank, and 40 new families to the neighborhood!"

One Gurney Street features nine one-bedroom units, 22 two-bedroom units, and nine three-bedroom units. All of the new rental units are affordable to workforce individuals and families at or below 60 percent of Area Median Income (AMI), 11 of the units are further subsidized to make them affordable to families with incomes at or below 30 percent of AMI. The 11 units include five units that are now home to formerly homeless households, and six fully wheelchair accessible units serving the needs of households with persons with disabilities. Three of the handicapped units are equipped with additional enhancements for persons with significant mobility and other disabilities under the Community Based Housing (CBH) program. Four of the units are specially equipped for persons with hearing impairment and visual disabilities.

"I want to thank everyone here today.This building has opened up the world for me again," said Allande Pierre, one of the building's new residents. "After becoming wheelchair-bound, I had to live in an institutional rehab center for more than a year without being able to move around without asking for permission. With my new apartment and the special accessibility adaptations, I have my freedom again. I can come and go as I please, move around the neighborhood, and  I can even invite family and friends over to my home. It's like night and day!"

The first floor of the new building has four retail storefronts located along Tremont Street and immediately across from the Roxbury Crossing T Station, and now extend and support the Mission Hill Main Streets district. In a strong show of their long-term commitment to the project and to the neighborhood, Eastern Bank and Metro Housing Boston now occupy retail and commercial space in thenew development. Eastern Bank, one of the project's construction/bridge lenders, recently opened the area's first bank branch in decades in one of the retail spaces. Metro Housing Boston purchased the office condo and relocated their headquarters and more than 155 employees to better service its clients at this location. Metro Housing Boston is the state's largest servicer of housing subsidies and a provider of housing support services.

"The staff and Board of Metro Housing are thrilled to participate in the development of Parcel 25 to help reconnect Mission Hill with Roxbury," said Chris Norris, Metro Housing Boston Executive Director. "Not only have we provided our participants with a modern and accessible location for them to receive our services and get connected to affordable homes, but we have also helped knit together a community."

The project is LEED Silver Certifiedand has many green features for long-term operations, sustainability, and provides several new improvements such as new sidewalks, handicap accessible ramps, benches, lighting, bike racks, and a new pedestrian plaza and walkway that allows residents and visitors to move through the site and to their points of destination. The building was designed by Goody Clancy architects, constructed by NEI General Contracting, and is managed by Maloney Properties.

The new development has been made possible in part by a City of Boston contribution of more than $4 million, including funds from the Community Development Block Grant and the Neighborhood Housing Trust tied to a linkage contribution from Children's Hospital. This contribution enabled the development team to take advantage of more than $3 million from the Commonwealth's Department of Housing and Community Development.The State also provided an allocation of almost $1 million in federal Low-Income Housing Tax Credits (LIHTC) that helped raise over $9.4 million in equity from Regions and First Sterling, the equity investor in the project.

About Housing A Changing City: Boston 2030

By the year 2030, Boston will reach more than 700,000 residents, a number the City has not seen since the 1950s. Housing a Changing City: Boston 2030 is Mayor Walsh's Administration's comprehensive housing plan to create 53,000 new units of housing for a variety of income levels. Since the policy was enacted in 2014, Boston has permitted more than 27,000 units of housing, completing nearly 18,000 of them as of the end of the second quarter in 2018. More than 11,000 of those permitted units are income-restricted, and more than 2,000 of these are reserved for Bostonians earning low and extremely low wages. For more information, please visit here.

The developer of Parcel 25 is Mission Hill Neighborhood Housing Services, the 44-year old community-based organization, which serves Mission Hill. MHNHS is a non-profit community development corporation committed to the revitalization and stabilization of the Mission Hill neighborhood for all those who live and work there. MHNHS' recent focus has been the planning and development of Parcel 25 and Roxbury Crossing area. MHNHS is implementing the community's vision, that resulted from a multi-year community planning process. The organization's most recent projects include The Maria Sanchez House (40 units/seniors), across the street from Parcel 25, and Parcel 25 Phase 1A (now One Gurney Street).