The report found a 23 cent wage gap, meaning women make on average 77 cents for every dollar a man earns in Greater Boston.

Mayor Martin J. Walsh and the Boston Women's Workforce Council (BWWC) today announced the release of its 2016 gender wage report. Continuing Mayor Walsh's mission to close the gender wage gap in Boston and create a more equitable city, the report is the first in the nation to use real wage data, self-reported by businesses in the Greater Boston area. The report harnessed a software program that anonymizes and aggregates data from individual organizations: data was collected from more than 112,000 employees, representing 11 percent of the Greater Boston workforce and $11 billion in annual earnings. Using this data, the City of Boston and the BWWC created a comprehensive look into the gender wage gap in Boston, and set a baseline for future progress. 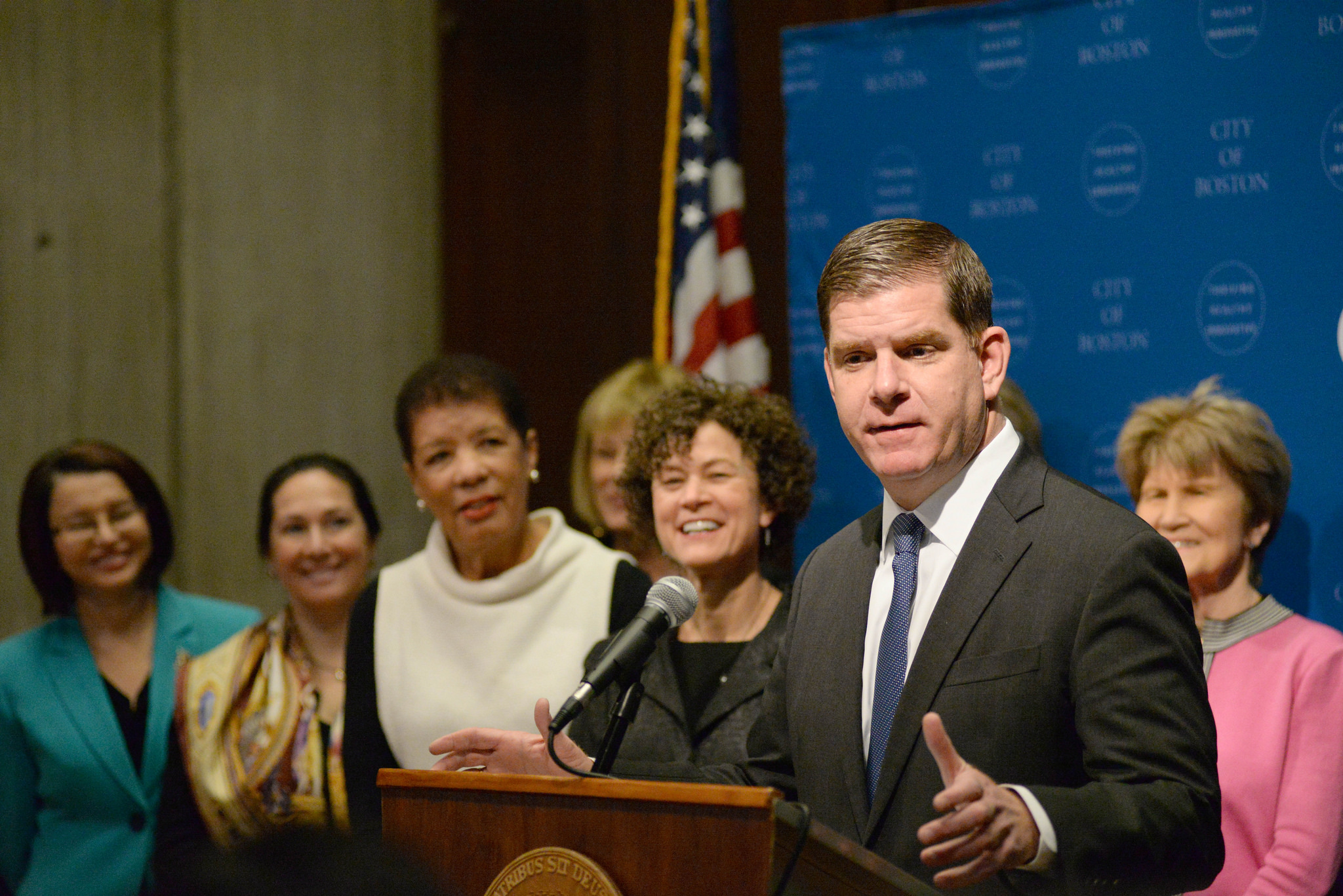 Mayor Martin Walsh offered remarks during the release of the Gender Wage Gap Report with the Boston Women's Workforce Council.

"Women make up the majority of Boston, but like most cities, companies and nations around the world, women -- especially women of color -- are underrepresented and underpaid in our workforce," said Mayor Walsh. "Our business, academic and civic leaders are working together to fix this, and to create an equitable Boston that has opportunity for all. I'm proud Boston is leading the conversation on how to address the gender wage gap, and this report is another step forward in our mission."

The gender wage gap varied by job category: the highest earnings parity was in the Mid-Level Worker and Administrative Worker job categories, where on average women earned more than their male counterparts.

The report would not be possible without the support from the business community. 179 companies have signed on to the 100% Talent Compact, committing to report wage data anonymously and to discuss best practices to retain and promote women in the workforce. Included in that number are five lead sponsors: Massachusetts Mutual Life Insurance Company, Partners HealthCare, Putnam Investments, State Street Corporation and Vertex Pharmaceuticals.

"As an inaugural signatory of the 100% Talent Compact, State Street is proud to be involved with the BWWC and this report," said Alison Quirk, executive vice president and chief human resources and citizenship officer at State Street. "State Street's continued participation in the Compact underscores our commitment to working to address the root causes of wage disparity in Boston so we can continue to build the diverse and sustainable talent pipeline we need for our future success."

"MassMutual is honored to support this important effort, standing with other companies that share our belief that gender should not impact compensation," said Eddie Ahmed, Head of Human Resources for MassMutual Financial Group. "We have a longstanding commitment to making sure our employees are compensated fairly for their work, and that salary differences are based on role, performance and merit alone."

Through this report, the BWWC has created a baseline wage gap estimate for the greater Boston workforce using two unique data sets. The BWWC created a data set of wages consisting of all U.S. Equal Employment Opportunity Commission (EEOC) filings in 2015, and compared this data to anonymously collected salary data from Compact signers in the same zip codes so that they could compare how representative their sample was.

Building off its commitment to investing in long-term solutions, the BWWC also announced today its new academic partnership with Boston University, where the BWWC will now have its office. The BWWC will be hosted at the Hariri Institute for Computing.

"This partnership is a natural outgrowth of our collaboration with the BWWC to develop the software platform for privacy-preserving analytics used in the 2017 gender wage report.  It also underscores the importance of connecting computer scientists with social scientists to pursue innovative data-driven research," said Azer Bestavros, Professor of Computer Science and Founding Director of the Hariri Institute for Computing at Boston University. "Working alongside researchers on Boston University's campus will allow the BWWC to expand its mission by developing more sophisticated analytics that identify the root causes of pay disparities as well as quantify the impact of best practices used for mitigation purposes. Together, we can make the necessary progress on closing the wage gap in our data-driven economy."

The full gender wage gap report can be found online.

About the Boston Women's Workforce Council
The Boston Women's Workforce Council is a public-private partnership between Mayor Walsh and the Boston Business Community to close the gender wage gap and make Boston the premier place for working women. So far 179 companies have signed on to the 100% Talent Compact, committing to report wage data anonymously and discuss best practices to retain and promote women in the workforce.