The first-of-its-kind park is a lasting legacy of Martin Richard's welcoming, inclusive nature, and will provide enjoyment for generations of Boston's children, families and visitors.

Mayor Martin J. Walsh, Governor Charlie Baker, and the family of Martin Richard today joined hundreds of residents to celebrate the opening of Martin's Park at the Smith Family Waterfront. Adjacent to Boston Children's Museum, the City of Boston Parks Department created an inclusive park and play space that is the first-of-its-kind in the City. The Department oversaw the project honoring Martin W. Richard, the youngest victim of the Boston Marathon bombings. Located at 64 Sleeper Street on the South Boston waterfront, Martin's Park is a climate-resilient park that provides a space for children, families, and visitors of all abilities to learn, grow and play.

"Over the past two years, we've witnessed the incredible transformation of Martin's Park into a world-class space for everyone in Boston to enjoy," said Mayor Walsh. "Parks are the heart and soul of our city. Martin's spirit will always be alive in Boston, and because of the work of the Richard family, countless families will come together at this park and share in the love, compassion and hope one special young boy taught us."

"Today's celebration is a testament to the dedication of the Richard family and all those that have supported them in this work," said Governor Charlie Baker. "Martin's Park will undoubtedly bring joy to so many young people and families in the Commonwealth, and I am grateful for the efforts that have made this park a reality."

Growing up in Dorchester, Martin spent much of his time playing with siblings Henry and Jane and their friends at many of the fields and playgrounds throughout the city. Designed with people of all ages and abilities in mind, Martin's Park will be a symbol of Martin's welcoming, inclusive nature, as well as his dream of an ideal park. This unique, public and free outdoor space will ensure that Martin's legacy remains a vibrant and positive influence for future generations. 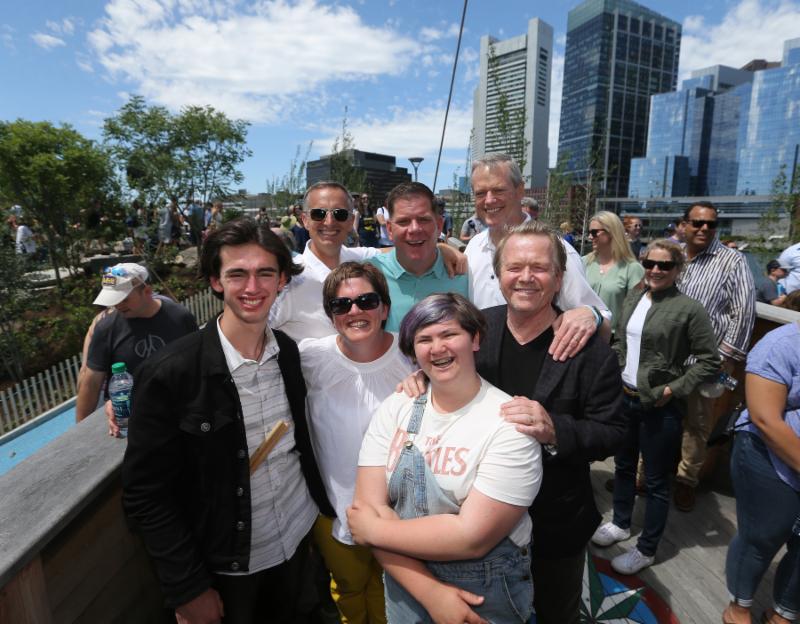 "We are forever grateful for the unwavering support of our donors, volunteers and city officials that have made Martin's Park possible, and we are thrilled to share this special place with everyone in the city of Boston," said Bill Richard. "For us, Martin's Park is a symbol of the commitment of so many individuals and their dedication to building a more kind, just, and inclusive community here in the city that we love."

The seating and reflection areas are designed to be inclusive and provide comfortable locations for parents and caregivers. Trails throughout the site create spaces for children to experience nature in the city and a wooden amphitheater is available for group gatherings, school events, Boston Children's Museum programming, and more. The site is also heavily planted providing a green framework around the park that creates a unique horticultural experience in an urban environment. Its central location draws a high volume of residents and visitors and connects with the existing plaza at Boston Children's Museum.

In addition to creating a park where children and families of all abilities can play, Martin's Park also helps support Boston's resilience and environment goals. Last year, Mayor Walsh announced a comprehensive and transformative vision that will invest in Boston's waterfront to protect the City's residents, homes, jobs, and infrastructure against the impacts of rising sea level and climate change. Mayor Walsh's plan, Resilient Boston Harbor, lays out strategies along Boston's 47-mile shoreline that will increase access and open space along the waterfront while better protecting the city during a major flooding event.

Martin's Park will be a cornerstone of Boston's work to make the city resilient to climate change and sea level rise. Protective measures against future flooding were created by raising parts of the park to prevent flood pathways, and by installing mini piles and vegetated beds reinforced with stone to prevent erosion at higher tides.

Martin's Park was a $15 million project, made possible by private funding through hundreds of donors and $2 million from the City of Boston, including capital funds and Community Preservation funds. The Smith Family Foundation and Barr Foundation each provided $3 million. The park site includes a parcel that was conveyed by the MBTA to the City of Boston. The park will be maintained through an endowment of the Friends of Martin's Park and will feature ongoing, no-cost programming.