The "#5onMain" campaign is a seasonal initiative for small businesses in Boston, encouraging residents to shop local this holiday season. 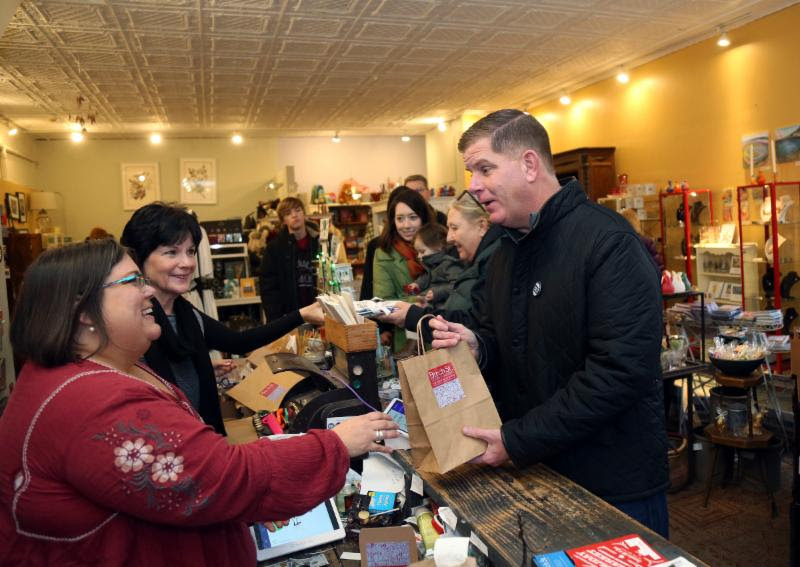 "I am thrilled to collaborate with WCVB again to support the small, local businesses throughout Boston's Main Streets and neighborhoods. Boston's small businesses invest in our local economies, employ neighbors, and enhance our City, and I am proud to once again support this creative initiative," said Mayor Walsh. "I look forward to seeing residents and visitors explore our local business districts and enjoy the holiday season with family and friends."

Mayor Walsh visited Dorchester boutique "The Cue" to encourage residents to shop locally this holiday season, and joined a celebration held at the Roslindale Village Main Street holiday tree lighting in Adams Park to announce the launch of the "#5onMain" campaign, a partnership with WCVB Channel 5 designed through on-air promotional spots to inspire holiday shoppers to support Main Streets and other local commercial districts during the holiday season.

Mayor Walsh and WCVB collaborated to create the "#5onMain" campaign, which encourages holiday shoppers to support businesses through the City's 20 Boston Main Streets districts and neighborhood business districts during the holiday season at least five times throughout the season. Participants pledge support either by purchasing gifts, dining out, or participating in local holiday events in Boston Main Streets districts, which will help drive traffic to local businesses and boost local business economy. Holiday shoppers are encouraged to amplify the message via social media, using the hashtag "#5onMain."

About the Mayor's Office of Economic Development

The Economic Development Cabinet's mission is to make Boston an appealing and accessible place for working families, entrepreneurs, businesses, and investors to innovate, grow, and thrive in a way that fosters inclusion, broadens opportunity, and shares prosperity, thereby enhancing the quality of life for all Bostonians and the experience for all visitors. Learn more on their website.

Developed out of a partnership between the City of Boston and the National Trust for Historic Preservation, the Boston Main Streets initiative was created in 1995 as the first urban, multi-district Main Streets program in the nation, with the goal of establishing thriving commercial districts throughout the city.  Boston Main Streets is a successful model for urban commercial district revitalization that strengthens local business districts through strong organizational development, community participation, resident and merchant education and sustainable development. Boston Main Streets continues to empower individuals in the small business sector to have a direct role in the economic health, physical appearance, and development of their own community.