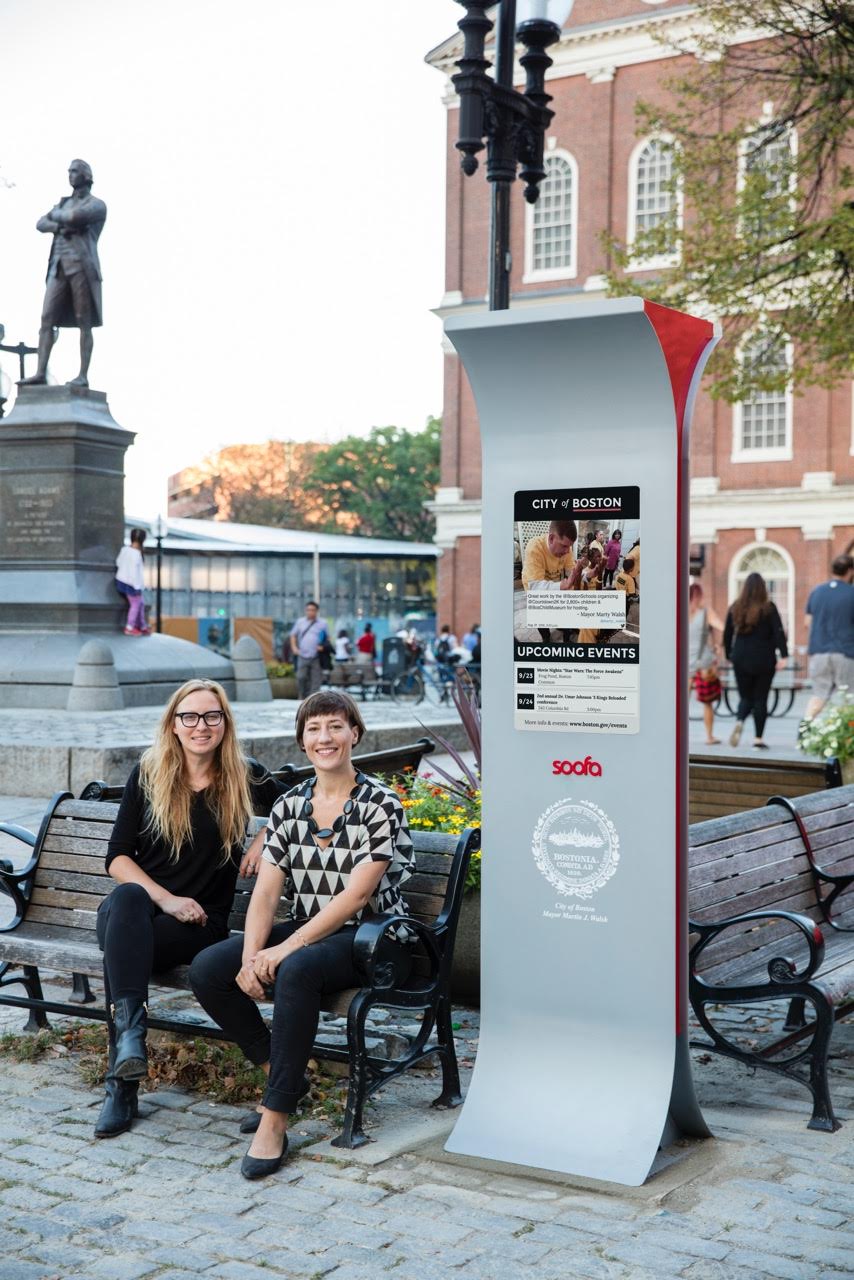 BOSTON - Friday, September 23, 2016 - Mayor Martin J. Walsh today revealed a solar powered Soofa Sign in Samuel Adams Park, located outside of Faneuil Hall. A companion to the screen unveiled on City Hall Plaza in July, the Soofa Sign will provide visitors to Faneuil Hall and Samuel Adams Park with information on local events and City services, and encourage visitors and residents to engage with each other and the City through social media. Through a partnership between the Mayor's Office of New Urban Mechanics (MONUM) and Soofa, the prototype sign is the first of its kind in the world.

"Over the past two years we have been taking steps to improve our city services and make the City more inviting for residents and visitors," said Mayor Walsh. "By providing residents with real-time information that is both helpful and easily accessible, we are building on our commitment to providing excellent City services to the people of Boston. The addition of this sign in one of the most historical places in our city is just one more step towards making Boston more welcoming for all who visit."

Boston is the first city in the world to pilot the Soofa Sign. The Soofa Sign provides an avenue for displaying information about municipal services like BOS:311, and can also provide visitors and residents with real-time transit information in the Sign's immediate area. The Mayor's Office of New Urban Mechanics plans to hold a Twitter Idea Chat in the next few months to engage the public on additional ideas for the Sign, including new locations and content, and encourages visitors and residents to suggest additional ideas for public space activation in the city.

"We're excited to have been chosen by Soofa to premiere their first-ever solar powered E Ink Sign," said Judy Wang, Innovation Fellow with the New Urban Mechanics. "The Sign encourages visitors and residents to engage with each other through the use of social media, and is another indicator of the many City efforts to activate the spaces in which we work, live and play."

The debut of the Soofa Sign on Samuel Adams Park marks the MIT Media Lab spin-off's foray into the digital signage ecosystem. Soofa began piloting the use of their flagship solar-powered benches throughout Boston in 2014, and the benches can be found outside Faneuil Hall and on the Waterfront to just outside the John D. O'Bryant School and in Malcolm X Park. These benches have now been installed in over 20 states in the United States.

The sign is part of a series of projects the City has unveiled to activate public spaces, including a "front lawn" on City Hall Plaza, and popup pedestrian spaces in Downtown Crossing.

"Soofa is proud to continue this relationship with the City of Boston, a leader in public space activation," said Sandra Richter, Soofa CEO and Co-Founder. "This Soofa Sign installation is another step in connecting citizens with their surroundings through smart city infrastructure."

The Mayor's Office of New Urban Mechanics serves as the City's innovation incubator, building partnerships between internal agencies and outside entrepreneurs to pilot projects that address resident needs. Their streetscape work spans ways to make the transportation experience better for users, through products like the ParkBoston app, to providing ways for local designers to make public space more intuitive and delightful with the Public Space Invitational.

Soofa connects city infrastructure to the Internet. Beautifully designed and intuitive to use the company embeds electronics into everyday city objects turning them into smart urban furniture.  It was founded by a team of female engineers and designers from Harvard and MIT. Their flagship product, the Soofa Bench, was piloted with the City of Boston in 2014. Based on the product's success, Soofa Benches have been installed in 20 U.S. states and over 50 cities. Soofa makes smart plug & play solutions for public spaces to make the city of tomorrow, today.