The project will create a pedestrian and bicycle network connecting historic sites in Boston.

Mayor Martin J. Walsh today joined community members along with city, state, and federal officials for a ribbon cutting event celebrating the completion of Connect Historic Boston. The project was a joint collaboration between the City of Boston and the National Parks Service to create a pedestrian and bicycle network connecting historic sites in Boston. 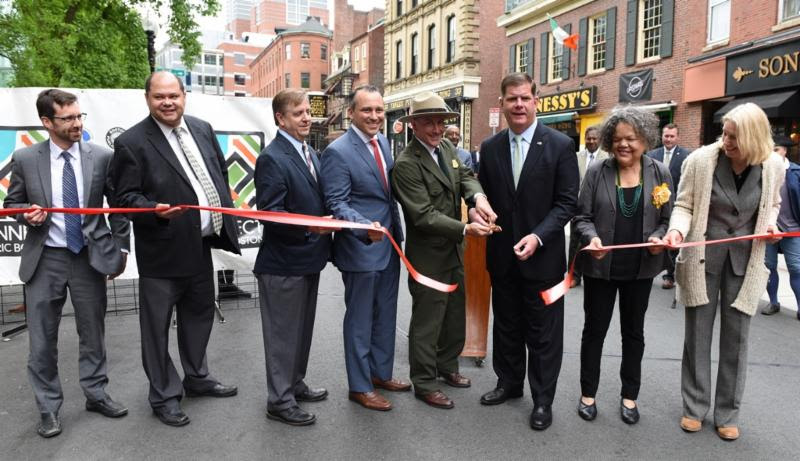 "The Connect Historic Boston Project demonstrates how the City of Boston is making upgrades to our infrastructure for the 21st century, while still preserving the history and spirit of our neighborhoods," said Mayor Walsh. "This project helps modernize the way we travel around the City and enhance the health and quality of life - all while connecting our past, present, and future. We're excited to use this project as a model for how we can make these upgrades all across our neighborhoods."

The City was awarded in 2013 a $15.5 million Transportation Investment Generating Economic Recovery (TIGER) grant from the U.S. Department of Transportation for the design and construction of Connect Historic Boston. The project covered four volumes of construction work on Joy Street in Beacon Hill, Constitution Road in Charlestown, the Blackstone Block in Downtown, and the installation of a new, 2.5 mile family friendly bike trail.

"The Friends of the Charlestown Navy Yard applaud Connect Historic Boston's efforts to better connect some of the City's most treasured historic sites," said Michael Parker, chair of Friends of the Charlestown Navy Yard. "The improvements along the Freedom Trail and Constitution Road provide a more open and pleasant experience and promote the safe coexistence of pedestrians, cyclists and vehicles."

In addition to the bike infrastructure created as part of the Connect Historic Boston project, the planned Rutherford Avenue/Sullivan Square road projectwill build bike lanes that will connect to the regional network, improve pedestrian and bike connections and safety between Charlestown and local MBTA stations, protect the neighborhood from cut-through traffic, and create open space. Furthermore, when completed, the Northern Avenue Bridge project will offer bike lanes providing a direct link from Rutherford Avenue to the Connect Historic Boston bike network.

Connect Historic Boston works toward the City's Go Boston 2030 goals to build a safe, reliable and equitable transportation network, and encourage more trips by other forms of active transportation that will reduce traffic congestion and emissions from motor vehicles. More than half of the 57 projects and policies detailed in the Action Plan are already on pace to be completed by 2030 or are in the design pipeline.

The Boston Transportation and Public Works Departments have aligned their operating budgets and capital plans to accomplish the initiatives identified in the Go Boston 2030 plan which encourages travel by transit, bike and on foot. Mayor Walsh's FY20 budget proposal includes a total of $10.6 million for spending on bike infrastructure, including more than $1 million in new funding going towards accelerating the design and construction of major bike corridors.

The City's FY20-24 $2.78 billion Capital Plan dedicates $1.15 billion to implement the core initiatives outlined in the Go Boston 2030 plan. Specific bike projects that will be advanced include the Southwest Corridor Extension, an on-street bike connection between the Southwest Corridor Path, Downtown and Beacon Hill; and Massachusetts Avenue between Columbia Road and Harrison Avenue.

About the Public Works Department

The Boston Public Works Department (PWD) provides core services essential to neighborhood quality of life. We direct general construction, maintenance, and cleaning of approximately 802 miles of roadways throughout the City. PWD operates two major drawbridges, maintain 68,055 street lights, and supervise contracts for the removal and disposal of approximately 190.000 tons of solid waste. We also operate Boston's recycling program with an annual diversion of approximately 45,000 tons. Follow them on Twitter @BostonPWD.