The new Washington Street bus lane will save 24,000 weekday riders up to 12 minutes on trips from Nubian Square into downtown.

Mayor Martin J. Walsh and the Boston Transportation Department, and in partnership with the MBTA, today announced the completion of bus improvements on Washington Street in Chinatown and Downtown Boston. The project includes exclusive bus lanes on Washington and Essex Streets, a separated bike lane from Stuart Street to Avenue de Lafayette, and a safer loading zone lane on Washington Street. 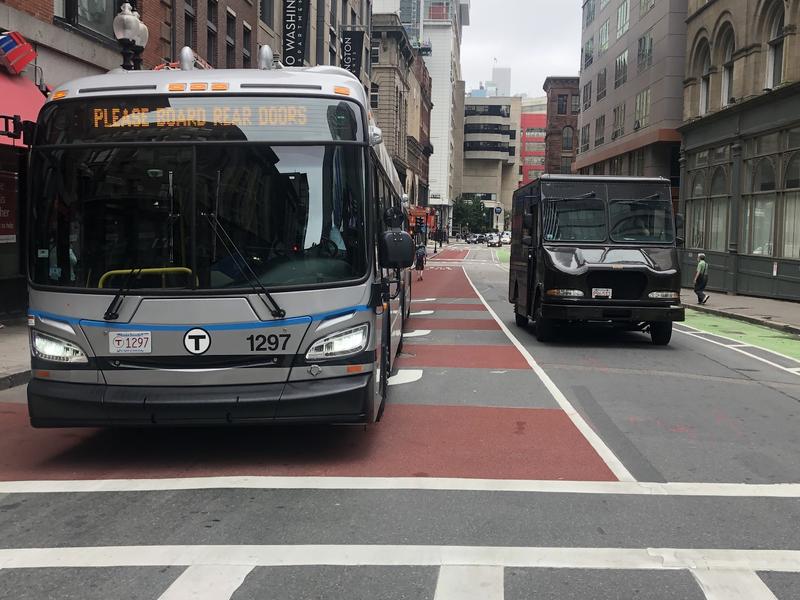 “These improvements on Washington Street are a critical part of our commitment to making our city streets safer and more equitable for everyone,” said City of Boston Mayor Martin J. Walsh. “Delivering on this project is a key part of Go Boston 2030, the City of Boston’s long-term, comprehensive transportation plan, and will help our residents more efficiently travel throughout our city.

Over 12,000 MBTA riders travel along Washington Street on a typical weekday between Herald Street and Temple Place. On average, these inbound riders are experiencing 6 minutes of delay over this short 10-block stretch. On days when congestion is at its worst, delays reach 13 minutes. The new Washington Street bus lane will save 24,000 weekday riders up to 12 minutes on trips from Nubian Square into downtown, offering commuters significantly more reliable transit service, including additional bus lane projects in response to the COVID-19 pandemic.

In addition, the design includes a separated bike lane on Washington Street between Stuart Street and Avenue de Lafayette. This route connects with new bike lanes recently installed on Stuart Street and Kneeland Street. New pickup and drop-off areas and loading zones have been added in rDowntown as a result of conversations with businesses.

This project was identified as a priority in Go Boston 2030, the City’s comprehensive transportation plan. Implementation of this lane was a project of the City’s Transit Team, a group within the Boston Transportation Department dedicated specifically to improving transit in Boston and making it more reliable and equitable for all.

Go Boston 2030, the City of Boston’s comprehensive transportation plan, highlighted the reliability of public transit — and bus service in particular — as a top priority.  Since the introduction of Go Boston 2030 in 2017, action has been taken on more than half of the 58 projects and policies identified in the plan.