Residences at Fairmount Station opens with celebration in Hyde Park

This once-vacant property is now a transit-oriented residential development that offers 27 rental units, including 24 affordable units.

Mayor Martin J. Wash today joined Southwest Boston Community Development Corporation, Traggorth Companies, elected officials and residents to celebrate the grand opening of The Residences at Fairmount Station. This once-vacant property is now a transit-oriented residential development that offers 27 rental units, including 24 affordable units. The project is part of a larger City effort to prioritize affordable development along the Fairmont Corridor, one of the action areas outlined in Imagine Boston 2030 with the goal of expanding opportunities and reducing disparities for residents in the area. 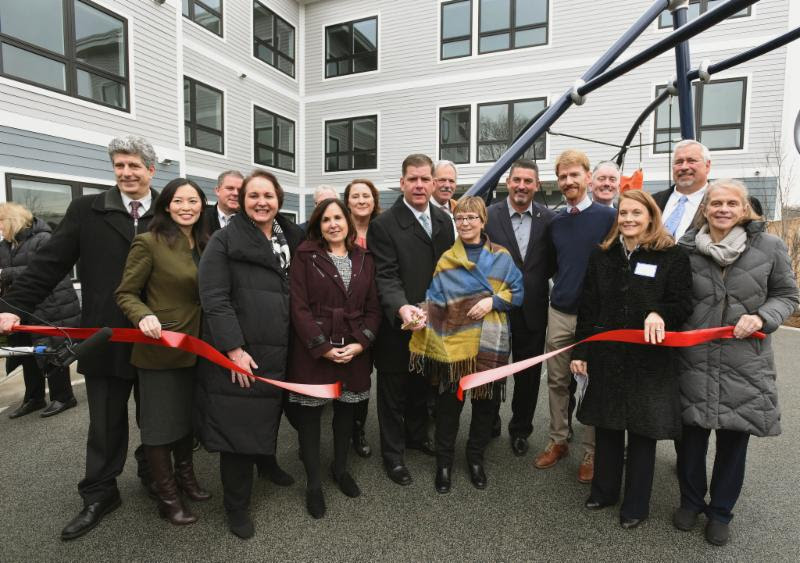 "Today we celebrate a milestone in our efforts to create more affordable housing by officially opening The Residences at Fairmount Station, which sets the standard for all transit-oriented development in the city," said Mayor Walsh. "I'm proud that with our partners we were able to create 27 rental homes for Boston's working families. This new development will continue to keep Hyde Park a strong and vibrant neighborhood for generations to come."

The $12 million four-story building features a combination of studio, one-bedroom, two-bedroom, and three-bedroom units. Out of the 27 rental units, 24 are affordable to households at or below 60 percent of Area Median Income (AMI), which is around $51,000 for a two-income household. The remaining three units are designated for households at or below 70 percent AMI, or around $60,000 for a two-income household. The development also offers 6,000 square feet of green space and play space, a public community room, and parking spaces and bike spaces.

"This lot used to be overgrown with weeds and falling down buildings," said Hyde Park resident Nicole Wiggins. "It is wonderful to see investment in our community that creates affordable housing, playgrounds, and community spaces that will benefit current Hyde Park residents."

The project is LEED Silver Certified and has many green features for long-term operations, sustainability, and includes several improvements such as new sidewalks, handicap accessible ramps, benches, lighting, bike racks, and a playground. The building was designed by DMS Design, constructed by Delphi Construction, and will be managed by Maloney Properties. Southwest Boston CDC will provide ongoing services to residents.

"We have long advocated for equitable investment along the Fairmount Corridor, and we could not be more thrilled that through community persistence and support from Mayor Walsh, we have succeeded," said Mimi Turchinetz, board chair of Southwest Boston Community Development Corporation, one of the joint venture partners on the project. "By providing residents with high-quality affordable housing, safe and beautiful play spaces, and access to transit, we make Hyde Park more beautiful while also providing Hyde Park families with much needed stability."

"It's been a pleasure working with Southwest Boston CDC to bring a shared vision for equitable transit oriented development to life," said Dave Traggorth, Principal of Traggorth Companies, the second partner in the joint venture to build the project. "Their tireless advocacy, along with the critical resources from the City of Boston and the Commonwealth, has created beautiful, affordable homes for Hyde Park families. We hope this project sets the standard for the neighborhood, and is just the beginning of an exciting chapter."

The new development has been made possible in part by a City of Boston contribution of more than $1.7 million. This contribution enabled the development team to take advantage of more than $2.5 million from the Commonwealth's Department of Housing and Community Development. The State also provided an allocation of almost $1.5 million in federal Low-Income Housing Tax Credits (LIHTC) that helped raise over $4.7 million in equity from National Equity Fund, the equity investor in the project. Webster Bank provided a construction loan with MassHousing providing long-term permanent financing. The Community Economic Development Assistance Corporation (CEDAC) and the Equitable Transit-Oriented Development Accelerator Fund (ETODAF) at LISC Boston provided critical predevelopment and acquisition funding to secure the site.

The Southwest Boston Community Development Corporation (SWBCDC) works to build and sustain a thriving, racially and economically equitable community in Hyde Park and Roslindale. We work to prevent displacement, create and preserve affordable housing, strengthen the commercial base of the neighborhoods, ensure access to good transit and green spaces, and develop local leaders whose voices are not otherwise heard. For more information, please visit swbcdc.org