As the temperatures rise in Boston, the arrival of summer is all but confirmed. Recreation, much like the idea of summer, is nearly universal and Boston’s neighborhoods have consistently provided unique ways for residents to spend their free time. Based on their locations and history, each of Boston’s neighborhoods play a role in the type of events and activities available to its residents.

For residents of East Boston, previous summers were not complete without a trip to Wood Island Park. Officially opening in 1898, this greenspace designed by Frederick Law Olmsted gave East Boston residents a place they could call their own.

In an oral history interview in the 1970s, Dino Liberti, an East Boston resident, notes that East Boston’s main access point to the park was Neptune Road and describes the amenities that the park offered in the first half of the 20th century. Both outdoor and indoor sports were embraced, providing residents with a variety of ways to partake in physical activities. Dino also discusses the evolution of the park, from a space that focused on sport to a space that provided a wider variety of social activities, allowing more people to enjoy the park. 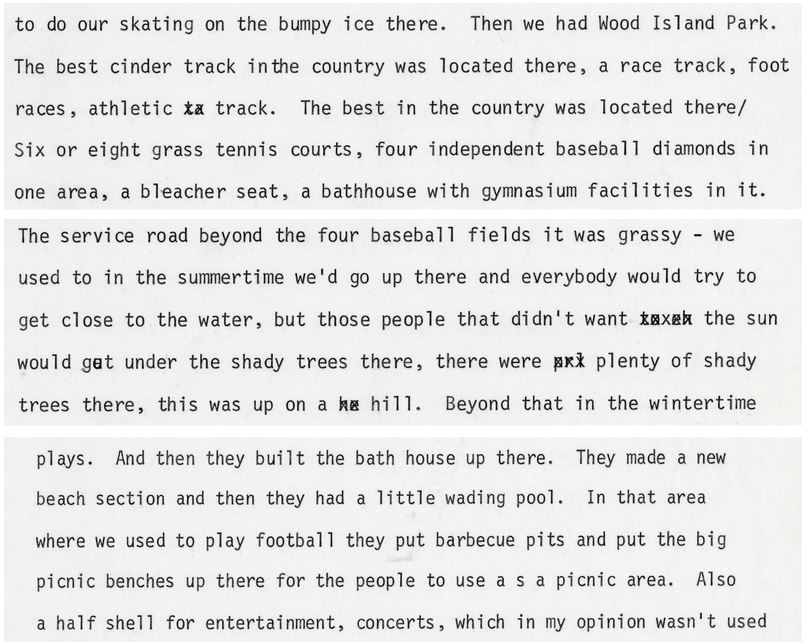 Al Diehl, who at age ten was a trombone player in East Boston’s Sacred Heart Church Band, commuted via ferry from Cambridge each week with his father to take lessons with band leader Thomas Deveney. Al discusses the musical programs that the Sacred Heart Band took part in within the Wood Island Park grounds. As a member of the band, Al remembers playing in multiple concerts a week at the park during the summer months.

Night provides a different view of a city and summer nights are no exception. Born in 1908, former East Boston resident Harold P. McLean recalls that summer nights provided the opportunity to take in views of boats which were taking part in water regattas in a different way. Seen from a structural sense in the daylight hours, at night the boats took on a different appearance, defined and illuminated by the unique lighting schemes that decorated each boat’s mast.

For those who live near the water, summer recreation isn’t complete without a trip to the beach. Just as they do now, Bostonians from different neighborhoods flocked to nearby beaches each summer. Helen Walker, who was born in 1905 on Kendall Street in Roxbury and lived throughout the neighborhood, recalls Sunday afternoons spent at Nantasket Beach in Hull, just south of Boston in Massachusetts Bay.

As many Roxbury residents did not use cars for transportation at this time, Helen and her family traveled by boat to the beach. Much like many young people will do this summer, she notes how many young men from Roxbury found summer jobs at the beach and within its accompanying amusements and concession stands.

Helen also visited Revere Beach just north of Boston, and while she found its recreational opportunities similar to Nantasket Beach, there was one notable exception — the imposing Cyclone roller coaster at the beach’s Wonderland Park. The coaster was built in 1925 and at the time was the tallest roller coaster in the world. Helen doesn’t go into great detail but does comment on one memorable ride.

In addition to beach, picnic, and sports destinations, in Boston the arrival of summer also brings recreation in the form of annual events that celebrate specific shared neighborhood histories. In Charlestown, the 1775 Battle of Bunker Hill is commemorated each year on June 17 during Bunker Hill Day. A lifelong, second generation Charlestown resident, Mary Gillen describes the celebrations leading up to the day of June 17, as well as parades and events on the day itself. 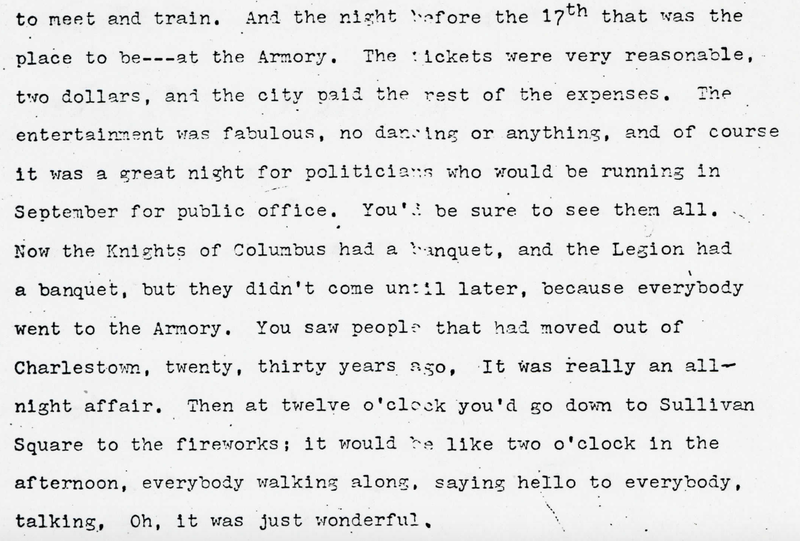 Mary also describes the feeling of the community that enveloped the neighborhood, with former Charlestown residents traveling back to the neighborhood to celebrate, as well as the familial quality present in the streets, brought upon by the “open house” aspect of the week.

As children, Sandy Lunt, Joanne Noyes, and Cindy Wood looked forward to Bunker Hill Day in a way akin to Christmas, but not surprisingly did not understand the entire scope and history encapsulated within the celebration. Residents of Charlestown since childhood, Sandy, Joanne, and Cindy have particular memories of the event which are rooted in typical summer activities that are meaningful to children.

As adults, Sandy, Cindy, and Joanne watched the celebration evolve over time and recognized that the addition of reenactments of the battle provided contemporary children with a perspective not present during their childhoods.

Similar to childhood experience of Sandy, Joanne, and Cindy, in Dorchester, Father Daniel Dunn fondly remembers the childhood amusements present on Dorchester Day. This annual event, celebrated on the first Sunday in June, historically includes a parade, a road race, and many other community activities, but Father Dunn mainly remembers the arrival of free ice cream!

While the experiences of these Bostonians took place decades ago, summer recreation today still looks the same in many ways. Much like Helen Walker, who traveled out of the City to neighboring beaches, Boston residents can take a ferry this summer to the Boston Harbor Islands. Made up of 32 islands, this destination is only 15 minutes from downtown Boston. Similar to Dino Liberti and Al Diehl’s experiences at Wood Island Park, residents can enjoy the green spaces and activities offered within the Emerald Necklace, a series of nine interconnected parks. Just like Wood Island Park, many of these parks were designed by Frederick Law Olmstead. Finally, while neighborhood celebrations such as Dorchester Day may not be taking place in person this year, residents of neighborhoods can still interact with and celebrate their history. Many of Boston’s neighborhoods including Roslindale, Dorchester, Roxbury, and the South End include painted murals that tell the story of the community by those who know it best — community members.

When it comes to summer recreation, the days are long, the nights are warm, and within Boston’s many neighborhoods, there is always a good way to spend free time.