Since launch in 2011, the publicly-owned and managed bike share program has enabled more than 14 million trips by bike.

Mayor Kim Janey today joined with officials from Brookline, Cambridge, and Somerville to celebrate the first decade of public bike share in the Boston region. Blue Cross Blue Shield of Massachusetts, the bike share’s title sponsor since 2018, was also on hand to celebrate.

At an event in front of the Boston Public Library in Copley Square, they unveiled a new “unicorn” bike. The bike features a unique design created by Helen Deng, Caroline Cedano, Tino Vo, and Elaine Chung at Artists for Humanity. The bike frame features 400 bike icons, each icon representing 10 bikes in the system today. The fender design includes a stylized “10” pattern to represent buildings and bridges in the Metro Boston area. 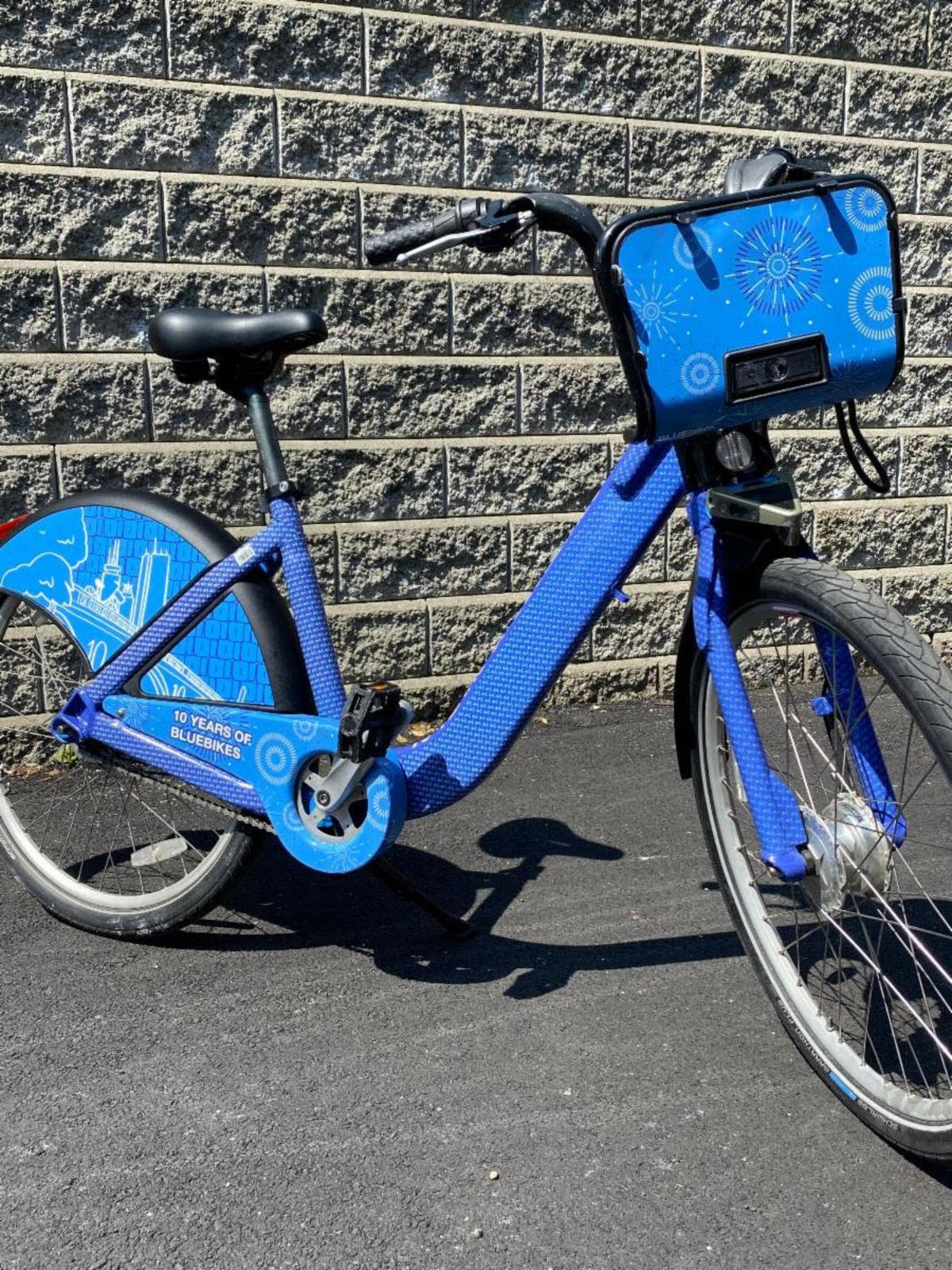 Metro Boston’s bike share program launched on July 28, 2011 as Hubway, with 600 bicycles and 60 stations. Logging more than 100,000 rides within the first 10 weeks, it quickly proved itself to be an essential part of Boston’s transportation network. In 2012, the municipalities of Brookline, Cambridge, and Somerville installed their own stations, enabling trips throughout the core of the region. Within the first five years of bike share, more than 5 million trips were taken.

In 2018, Blue Cross Blue Shield of Massachusetts became the title sponsor, supporting a massive expansion of the network and rebranding the system as Bluebikes. Since then, seven additional communities have joined the Bluebikes system: Arlington, Chelsea, Everett, Newton, Revere, Salem, and Watertown. Bluebikes are now available across an area of over 95 square miles with 400 stations and 4,000 bikes.

“We’re thrilled to see the incredible impact the public bike share system has had on Metro Boston over the last decade and we’re honored to partner with the municipalities in supporting Bluebikes’ continued growth,” said Kathy Klingler, chief consumer and marketing officer of Blue Cross Blue Shield of Massachusetts. “Our sponsorship of Bluebikes aligns perfectly with our mission to help all Massachusetts residents lead healthy lives and to stand as an ally in strengthening the overall health of our communities.”

Today, more than 22,000 people hold annual passes for Bluebikes. As a public system, fares are set to ensure affordability for the region’s residents, workers, and visitors. Discounted fares are available for $5 per month or $50 per year for any resident who participates in public assistance programs such as SNAP. Over 350 employers offer discounted bike share passes to their employees.

“Bluebikes has helped make Boston a more accessible, affordable, and environmentally friendly city,” said Mayor Janey. “By connecting Boston neighborhoods and surrounding cities for residents, commuters, and visitors alike, bike sharing represents a key intersection of transportation equity and climate justice. I was proud to provide free Blubikes memberships to many of the workers in our community hardest hit by the pandemic and I look forward to continuing our partnership for many years to come.”

“Bluebikes has been a critical addition to the transportation options available in Greater Boston,” noted Chris Dempsey, Chair of the Brookline Transportation Board. “Today, Bluebikes is one of the most popular bike share systems in the country, and it serves commuters, residents, students and visitors in neighborhoods across the region. We applaud the work of so many who have made this anniversary possible, and look forward to the next decade of this thriving, vital system.”

“Cambridge is proud to be one of the original Bluebikes municipalities. This robust bike share system has created an affordable, environmentally sustainable public transportation option to the people who live, work and visit here,” said Louis A. DePasquale, Cambridge City Manager.  “We particularly appreciate the support from our community partners, including Harvard and MIT who were with us from the start, as well as CambridgeSide, the Museum of Science, Biogen, Verizon, Google, BioMed Realty, Alexandria Real Estate, and EF.”

“Congratulations to Bluebikes, its many members, and our municipal partners on ten years of public bikeshare,” said Somerville Mayor Joseph A. Curtatone. “Bluebikes is a convenient, inexpensive, and essential public transportation service in the region and continues to be an important tool for equitable mobility in Somerville. We look forward to continuing to enhance and expand this important public service.”

Bluebikes is public transportation by bike. The system is jointly owned and managed by the Cities of Boston, Cambridge, Everett, Salem, and Somerville and the Town of Brookline. Blue Cross and Blue Shield of Massachusetts is the system’s title sponsor. Riders can find 400 stations and 4000 bikes across 11 municipalities in Metro Boston. Since 2011, more than 14 million trips have been taken by bike share. For more information about Bluebikes, visit boston.gov/bluebikes