Chosen by public art experts, the roster of selected projects was unveiled this morning at Americans for the Arts’ Annual Convention in Minneapolis.

Americans for the Arts today honored two public art projects supported by the City of Boston among 50 outstanding public arts projects through the Public Art Network Year in Review program, the only national program that specifically recognizes the most compelling public art.

“The City of Boston has transformed over the past several years thanks to incredible new pieces of public art,” said Mayor Martin J. Walsh. “Through projects like our Percent for Art program, our artist-in-residence program Boston AIR, and temporary public art projects, we’re integrating art into every neighborhood of the City, and it’s great to see these efforts receive national recognition.”

The Grove Hall Mural Series was a project commissioned by the City of Boston in the fall of 2017 with the goal of improving the streetscape, creating an environment that is safe, convenient and comfortable, and celebrating the beauty of the neighborhood, local heroes and current residents. Three murals were painted in the Grove Hall neighborhood of Dorchester as part of this project, including:

Located at the UCERM Empowerment Center at 324 Blue Hill Ave, Gibbs designed this mural to give a nod to the past in order to breathe life into the future. The juxtaposition of an older pastime with youthful and futuristic imagery relates to the community's objective to revitalize the neighborhood while embracing and strengthening its past, present, and future identity and sense of place.

Inspired by the legacy of Nobel Peace Prize recipient Nelson Mandela, Sepulveda’s mural located at 41 Geneva Ave was created with the hope that it would inspire all people, young and old and of all ethnicities, to actively seek knowledge, truth, and civic engagement. 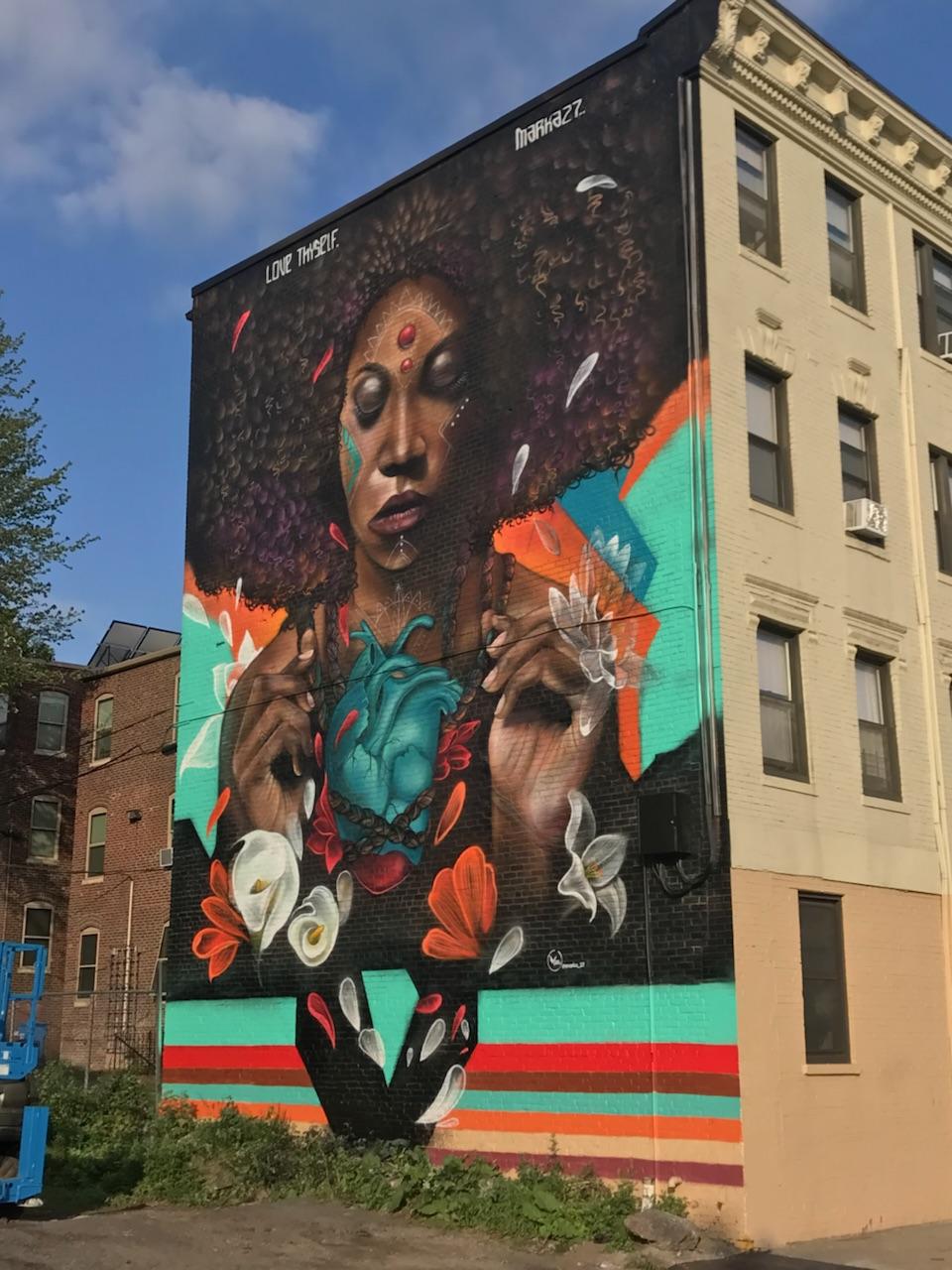 Quiñonez’s mural at 199 Quincy Street is intended to encourage humanity to respect one's mind, body and soul. According to Quiñonez, the heart in the mural represents the most important and vital organ that keeps people going, and also represents love. With Liza Quiñonez, he is a co-founder of Street Theory, a creative studio and gallery.

“The best of public art can challenge, delight, educate, and illuminate. Most of all, public art creates a sense of civic vitality in the cities, towns, and communities we inhabit and visit,” said Robert L. Lynch, president and CEO of Americans for the Arts. “As these Public Art Network Year in Review selections illustrate, public art has the power to enhance our lives on a scale that little else can. I congratulate the artists and commissioning groups for these community treasures, and I look forward to honoring more great works in the years to come.”

The second Boston project that was recognized, Hard in the Paint by Maria Molteni, was developed as part of her project for Boston AIR, the City of Boston’s artist-in-residence program. Molteni collaborated with youth from the BCYF Perkins after school program and peewee basketball community to draft and execute vibrant new painted designs for the Harambee Park basketball courts, neighboring the Perkins Center. Molteni aimed on centering the project on community input and narratives, and the final product was a colorful, dynamic basketball court, filled with words and images that define the Perkins community. 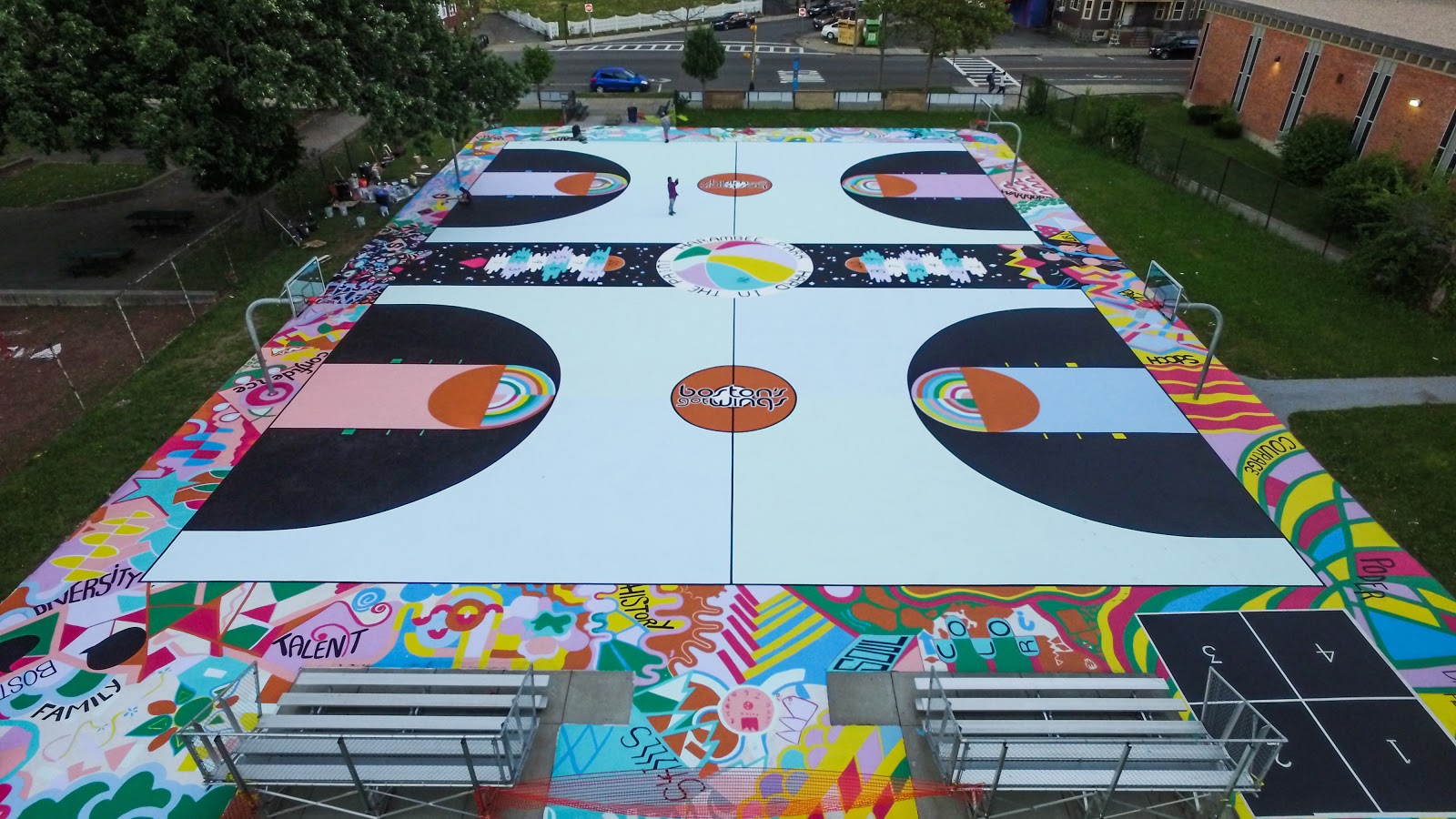 “I think the unique success of our Hard in the Paint project, and what sets it apart from other basketball court projects I’ve seen, hinges on the fact that we were allowed to have an organic and radically open community and creative process,” said Maria Molteni. “When I work on these courts, I intentionally begin with only a loose vision so that the most appropriate piece for that space and neighborhood can develop as it will. It’s less about locking down the final product from the beginning and more about being patient, present, and flexible with a genuine and attentive artistic practice.”

“These projects will serve as models for cities around the county because they exemplify the power of public art to celebrate and reflect the diversity of lived experience in the City of Boston,” said Kara Elliott-Ortega, Chief of Arts and Culture for the City of Boston.

Three other projects in Boston were featured in the 2019 PAN Year in Review, including UNLESS by Stephanie Cardon in the Back Bay, Pathways to Freedom by Julia Vogl in the Boston Common, and Temple of Mnemon by Anne Lilly on the Rose Kennedy Greenway. The complete list of projects selected for Year in Review can be viewed online.

Building on his Administration’s commitment to arts and culture in the City of Boston, in 2017, Americans for the Arts presented Mayor Walsh with the National Award for Local Arts Leadership for cities with a population of 100,000 or more. The award was presented as a way to recognize the accomplishments achieved over the last several years to bolstering the arts, including doubling the amount of grant money available to Boston arts organizations; creating a Cabinet-level position for arts and culture; creating Boston’s first cultural plan, Boston Creates; establishing Boston’s artist-in-residence program; and more.

About the Mayor’s Office of Arts and Culture

The Mayor's Office of Arts and Culture's mission is to support artists, the cultural sector, and to promote access to the arts for all. The office houses the Boston Cultural Council, the Boston Art Commission, and the Poet Laureate program. Responsibilities include implementing the City's cultural plan, Boston Creates; commissioning public art, managing the Boston Artist-in-Residence program; curating exhibitions in City Hall; and operating the historic Strand Theater in Dorchester.

About Americans for the Arts

Americans for the Arts is the leading nonprofit organization for advancing the arts and arts education in America. With offices in Washington, D.C., and New York City, it has a record of more than 55 years of service. Americans for the Arts is dedicated to representing and serving local communities and creating opportunities for every American to participate in and appreciate all forms of the arts.