Four drivers were recognized for their contribution to Vision Zero and driving safely on Boston's streets.

Mayor Martin J. Walsh recognized the four top winners of the Boston's Safest Driver Competition, presenting them with citations and cash prizes totaling $4,500 for practicing safe driving habits in the City.  The competition, which kicked off in early October, was based on a smartphone app that scored drivers on behaviors associated with safer driving. The initiative was designed to actively and innovatively engage the public in Boston's Vision Zero effort to improve traffic safety and eliminate fatalities from traffic crashes in Boston by 2030. 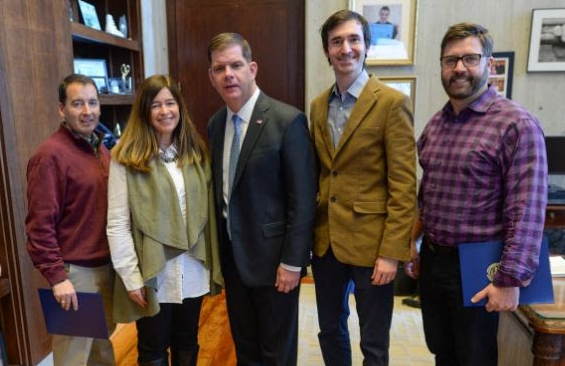 "I'm happy to present these awards to four responsible Boston drivers, each of whom received a perfect score of 100 while logging over 1,000 miles each during the course of the competition," said Mayor Walsh. "Through our initiative Vision Zero, Boston is committed to improving our streets, and I thank all participants in the competition for their work to make our streets safer for our City's residents, commuters and visitors."

The top winners of the Boston's Safest Driver Competition are:

Another 98 high scoring participants have been awarded over $3,000 in cash prizes since the competition began in October.

"This was a humbling experience overall," said first place winner Deirdre Manning. "I had to put my ego in the backseat and let all the other cars pass me.  More than one person glared at me or showed me I was #1 when they zipped around me. Most importantly, it was a great experiment for my soon-to-be-driving teenager as she got a good idea of how I want her to drive."

The app scores drivers between 0 and 100 based on five measurements, including speeding and phone use. Nearly 5,000 people participated in the competition. Dramatic reductions in phone use and speeding by competitors were recorded, with 1,100 competitors seeing their phone distraction drop by 47% and their speeding drop by almost 35%. The app recorded over 190,000 trips taken by participants who represented 99 communities in Metro Boston as well as all of Boston's neighborhoods. The greatest number of people who participated in the competition are residents of Dorchester, with 214 drivers using the app. Outside of Boston, the City of Quincy had the highest number of participants with 143 users.

"We were thrilled with the feedback we heard from people using the app to compete with their friends, family, neighbors and co-workers over 'best driver' bragging rights," said Kris Carter, Co-Chair of the Mayor's Office of New Urban Mechanics. "It's not just of people driving safer on our streets, but there is a real civic good that can come from the aggregated data generated that once analyzed could lead to very insightful transportation planning decisions."

The app was developed by Cambridge Telematics and remains available for download in the app store.  It provides feedback to drivers on five metrics for each trip that they take: rapid acceleration, harsh braking, sharp turns, at-risk speeding and phone distraction. The app logs trips while in the background on the user's phone. The driver is alerted afterwards of their score for that trip, how they did on the different factors, and provided with helpful tips to improve in the future. Even beyond this initial competition, the City of Boston and Cambridge Mobile Telematics encourage people to download the app, challenge their friends and family to be better drivers and help the city collect information that can lead to improved streets for all roadway users.

"We are pleased to join Mayor Walsh and the Vision Zero Task Force on this first public-private partnership to end distracted driving and make drivers better," said Sam Madden, Chief Scientist at Cambridge Mobile Telematics.  "The impressive reductions in unsafe driving behaviors from the program, as well as the insights about urban planning that the city is obtaining from the anonymized and aggregated data, are making Boston's roads safer."