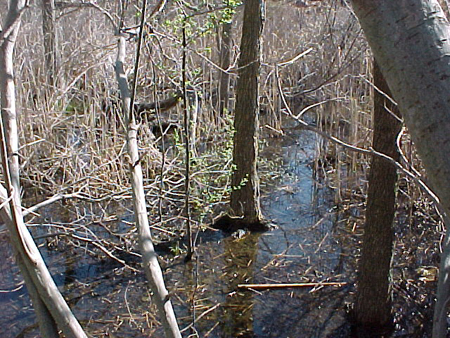 The DCR has acquired the majority of this site and has incorporated it into the Stony Brook Reservation. However, one City-owned parcel adjacent to the George Wright Golf Course and High Point Village contains a healthy cattail marsh surrounded by upland forest. The wetland is believed to be a habitat for the rare spotted turtle. A mixed deciduous forest, predominantly composed of oaks and birch, covers the upland areas while the lowland area hosts traditional wetland species such as sweet pepperbush, highbush blueberry, lowbush blueberry, and witchhazel. Teaberry, sweet fern, and ferns are common groundcover. Ecologically and topographically, the parcel is contiguous with the reservation. In fact, the only feature marking the site is the fence and rock wall that divides the parcel from the golf course. 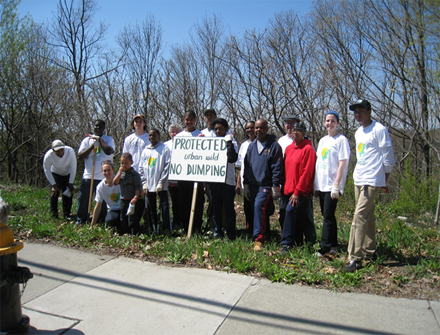 Deforest Urban Wild is a small urban wild perched high atop Hyde Park’s Grew Hill. It is particularly valuable as a wildlife corridor given its proximity and connectivity with adjacent open space – notably the George Wright Golf Course and Stoney Brook State Reservation.  With direct public access off of Deforest Street, it features a wild meadow atop a forested hillside that commands scenic views of the Blue Hills State Reservation in winter.Despite some encroachment and past dumping, the site also provides a visual reprieve in this otherwise thickly settled area. Members of the immediate neighborhood formed a friends group and successfully lobbied for the conservation of this land. 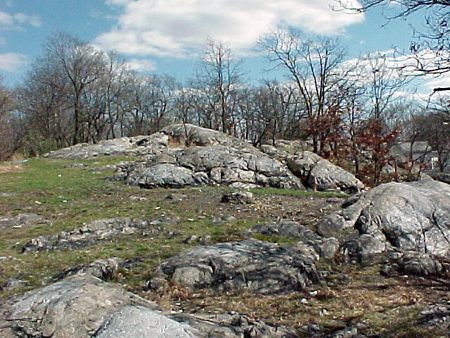 Dell Avenue Rock consists primarily of a puddingstone ledge arising approximately 40 feet above Hyde Park Avenue. There are some outcrops near the top of the rock. The site is dominated by woodland, comprised of small and medium sized maples, oaks, cherry, and birch with sparse, grassy ground cover. This site provides a pleasant visual buffer along a busy, dense stretch of Hyde Park Avenue. Views from the top of the rock overlook the Stony Brook Reservation and in the winter there are views of the Blue Hills. The open, grassy areas on the lower portion of the site provide a quiet retreat for picnics or reading. 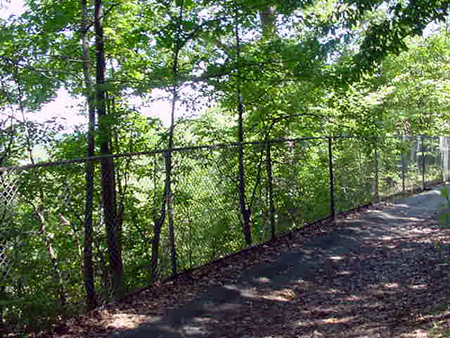 This site is a very steep slope below the Beechmont Footway, which connects Beech Avenue to Ashville Street, in the Clarendon Hills section of Hyde Park. The slope descends to the backyards of houses on Windham Street. The site is densely wooded with maples, oak, hickory, birch, and cherry. Monterey Hilltop provides residents with a lush wooded area in a built-up area of primarily single-family houses. Furthermore, it provides a nice view to those walking along the Beechmont Footway. The homes abutting the site, along Windham Street, particularly benefit by having the wooded area directly adjacent to their backyards. Given the severity of the slope, access through the site is not feasible. 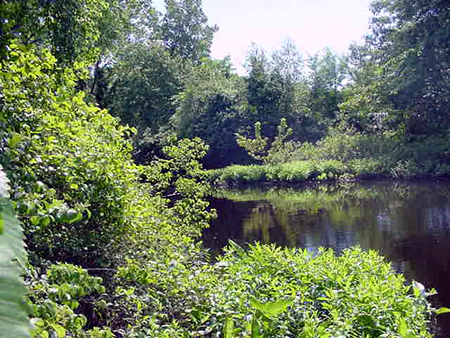 This urban wild, once called Motherbrook III, is now part of Reservation Road Park. Leading to the urban wild section south of the underpass, a stabilized stonedust pathway winds from the skateboard park to a quiet overlook beside the Motherbrook. An interpretive sign highlights the history of the canal and commemorates the construction of the park. The wild affords pleasant, secluded views of the Motherbrook and a bordering wetland. Oaks dominate the site although a large number of elm, crabapple, and sumac have also rooted on the land. Because much of the land appears to be fill, growing conditions are harsh, thus favoring invasive plants such as oriental bittersweet, multiflora rose, and Norway maple. Nevertheless, with proper restoration of native, riparian plants, the area can support a larger diversity of flora and animals. 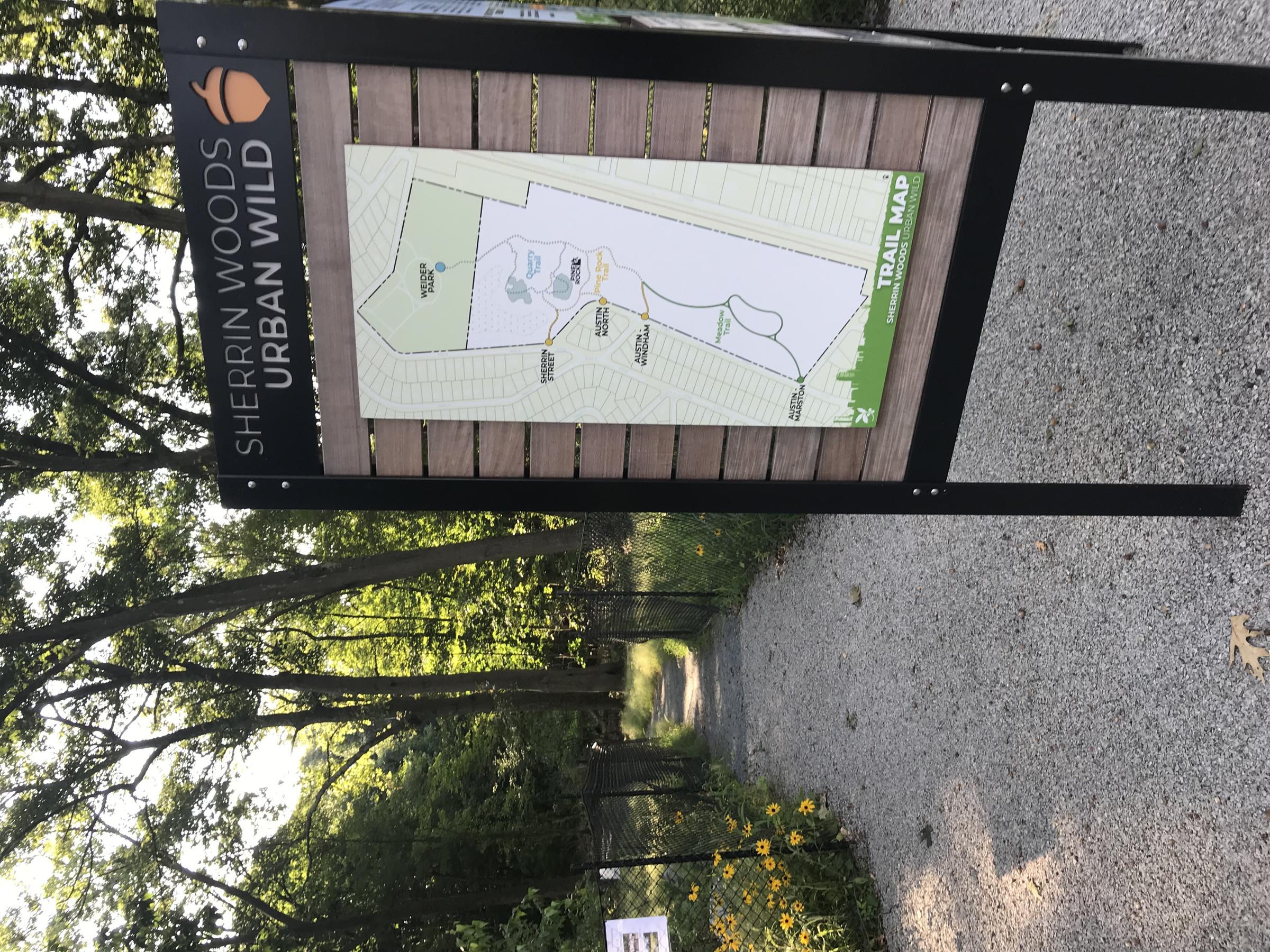 This is the 2nd largest urban wild site, located between the MBTA commuter rail tracks and Austin Street, just north of West Street. The northern half of the site is dominated by a rocky outcrop, known as Pine Rock, and forest comprised primarily of mature oaks, hickory, cherry, birch, and hemlock. The southern portion of the site is mostly filled-in stream channels and wetlands, which have gradually developed into a dense, weedy thicket of non-native, invasive shrubs and small trees. There are trails traversing the northern portion of the site. Along the eastern edge of the site is a right-of-way for the Stony Brook Conduit, replacing the now buried Stony Brook. Because of its size and accessibility, Sherrin Street Woods offers local residents many opportunities for passive recreation and natural history education, as well as significant aesthetic values. This large site helps break up the uniformity of many, small single-family house lots, and provides an appealing semi-rural feel to the neighborhood. 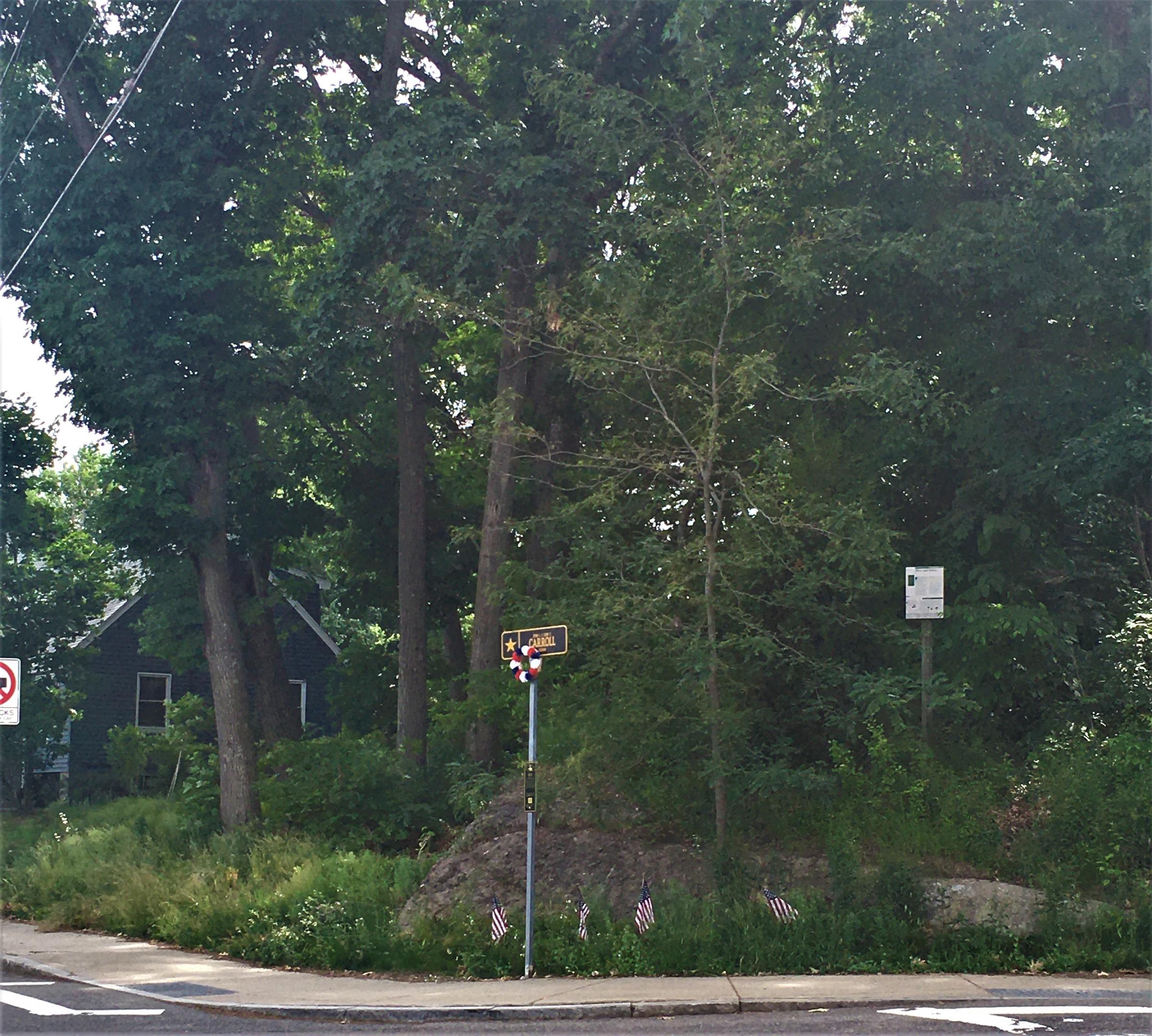 West and Austin Street Rock is a wooded, cone-shaped puddingstone outcrop that rises thirty feet from the corner of West St. and Austin St. in Hyde Park. Although the large mounds of puddingstone are undoubtedly the reason this parcel was left undeveloped, the site does merit attention for its ecological attributes. This small predominantly oak woodland serves as a reminder of the landscape that once characterized much of Hyde Park. Red maple, birch, eastern white pine, and the occasional hemlock are scattered upon a background of mature red, black, and chestnut oaks. 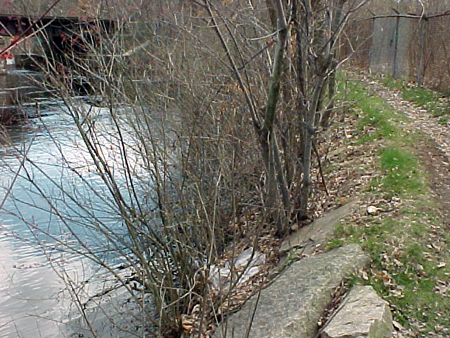 The West Street Urban Wild, owned by the Boston Conservation Commission, is a rare piece of greenspace along the Neponset River. The parcel is bounded on the northwest by private residences that front on Pierce Street, on the northeast by West Street, on the east by the Neponset River, on the southeast by an Amtrak and commuter railroad right-of-way and on the southwest by privately-owned land. Currently, a chain-link fence surrounds the entire site although the fence has been broken in certain areas. The DCR owns a narrow section of land, also on the Neponset River, adjacent to the West Street Urban Wild. Mostly wooded and flat, the urban wild's uniqueness lies in its status as one of the few conservation areas along the Neponset River.