Bus and bike lane established on Brighton avenue in Allston

Brighton Avenue, in the eastbound direction, will host a new lane designated for buses and bikes, aimed at improving travel times and reliability for bus riders, while also improving safety for cyclists.

Mayor Martin J. Walsh and the Boston Transportation Department (BTD) today announced in partnership with the MBTA that a new, permanent bus lane will be established on Brighton Avenue, inbound from Union Square to Packards Corner, effective in late June. The lane will be active 24 hours a day, 7 days a week, and bicycles will be welcome to share the lane with MBTA and school buses. Installation of the lane will start on Wednesday.

"I am proud that by working collaboratively with residents in the Allston/Brighton community, we are able to dedicate a bus lane on Brighton Avenue that will improve commute times, reduce congestion and reduce emissions from motor vehicles in the neighborhood," said Mayor Walsh. "This new bus lane is an important step forward in our efforts to improve public transportation and make it safer and more reliable for users."

Improving bus service is a stated goal of Go Boston 2030, the City of Boston's long-term transportation plan, with Brighton Avenue, between Cambridge Street and Commonwealth Avenue, being identified as a priority corridor. More than 14,000 MBTA bus passengers travel along this stretch each day, and the street is used by Boston Public School buses as well. 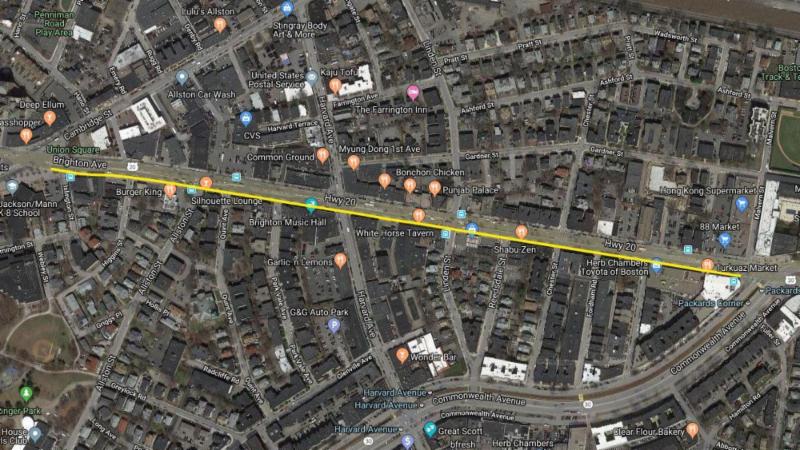 The MBTA is providing financial support for design and implementation of the bus lane, while the Mayor's budget calls for investing $200,000 annually for maintenance of designated bus lanes in the City of Boston. The MBTA will also assist in the enforcement of the bus lane, and will collaborate with BTD to monitor the lane's effectiveness. As a second phase of the Brighton Avenue project, the City will partner with the MBTA to look at other bus service improvements for the corridor this fall. BTD will also explore updating traffic signals to give priority to buses, as well as bumping out the curb at bus stops, so buses will not need to leave the bus lane to allow passengers on and off.

"This is great news for riders of the Routes 57 and 66, and it reinforces our commitment to partner with Boston and other communities to improve transit services for those who are dependent upon it," said MBTA General Manager Steve Poftak. "Our Capital Investment Program has dedicated $9 million to fund bus lanes and other improvements for approximately fourteen miles of high volume bus corridors in and around Boston."

The launch of this lane has been supported by community partners including Allston Main Streets, the Allston-Brighton Health Collaborative, and LivableStreets Alliance. These groups have been instrumental in collecting feedback on bus service from riders and community members, as well as collaborating with the City on the final design of the lane.

Anna Leslie, MPH, Director of the Allston Brighton Health Collaborative said, "Since Winter 2018, the Allston Brighton Health Collaborative has worked closely with Livable Streets Alliance and Allston Village Main Streets to demonstrate the broad neighborhood support for safer and more efficient mobility on Brighton Ave. We know that accessible transportation for all is essential for any healthy community and our Transportation Committee is so pleased with the bus/bike lane outcome. We are so appreciative to the BTD Transit Team for prioritizing this corridor and thinking creatively, and we look forward to continued and successful partnership."

The Boston Transportation Department's newly-formed Transit Team, created under the leadership of Mayor Walsh, has engaged in a robust stakeholder engagement process to prepare for the installation of this lane. The team has connected with community organizations in the area and visited all businesses along the eastbound side of Brighton Avenue. In addition, the Transit Team has launched a project page for the bus lane on the City's website.

In addition to the new bus/bike lane, two new zones are being established in Brighton Avenue at Harvard Avenue and Linden Street for daytime commercial loading and evening pick up/drop off. Flexible curb space on Brighton Avenue will help reduce double parking, provide space for rideshare vehicle pick up/drop off, and support access to businesses.

After the installation of the lane, travel time was reduced by 20 to 25 percent during the hours of highest congestion (7:30 AM to 8:30 AM). In a survey of bus riders and bicyclists on Washington Street, 94 percent supported a permanent bus and bicycle lane. Of the bus passengers, 92 percent perceived that the bus lane decreased their travel time. Of the bicyclists, 89 percent reported feeling safer in the shared lane. In addition, morning peak period daily ridership along Washington Street increased by 158 passengers following the installation of the bus lane.

This launch of the Brighton Avenue bus lane is part of a collaborative effort by the  City and the MBTA to expand transit infrastructure and improve rider experience throughout Boston. BTD is also working on plans to install a bus lane downtown on heavily congested North Washington Street. For more information on the new bus lane, please visit here.