For every "Beat L.A." t-shirt sold by Modell's Sporting Goods, $1 will go to benefit the City of Boston initiative to help end chronic homelessness in the City.

Mayor Martin J. Walsh and Mitchell Modell, CEO of Modell's Sporting Goods, today announced $1 from the sale of every "Beat L.A." t-shirt sold by Modell's will go to benefit Boston's Way Home Fund, a City of Boston initiative designed to raise $10 million to help end chronic homelessness in the City. Mayor Walsh announced the Boston's Way Home Fund in his 2018 inauguration speech, and to date, the fund has raised $3.7 million to support Mayor Walsh's work to ensure all Bostonians have a stable, secure home. 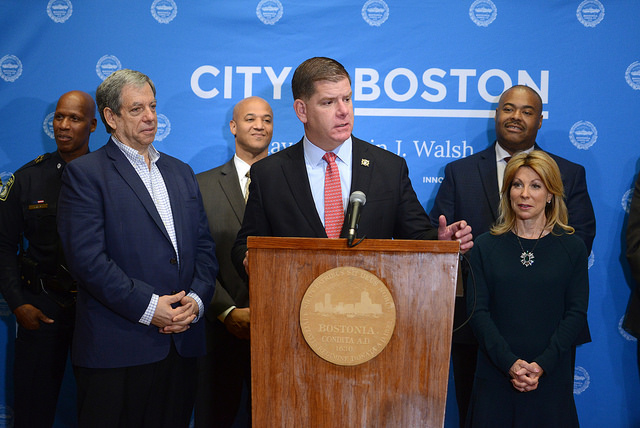 "Boston is proud and excited to host the World Series, and with all eyes on Boston, this is an opportunity to bring awareness to what Boston truly stands for: neighbors helping neighbors, and creating a stronger Boston together," said Mayor Walsh. "I'm grateful to Modell's for stepping up and helping Boston get even closer towards our goal of ending chronic homelessness in our city. Whether it's baseball or housing, Boston is first in the nation as we put our people first."

"We're excited to team up with Mayor Walsh and the Boston's Way Home Fund to help the local community during this exciting time for Boston," said Mitch Modell, CEO of Modell's Sporting Goods. "Together we can help 'Beat LA' and beat homelessness".

The Boston's Way Home Fund, a partnership with Pine Street Inn, has a set goal of raising $10 million over four years, with funds being used to create 200 new units of supportive, sustainable, long-term housing for chronically homeless individuals.

In March, Mayor Walsh announced Partners Healthcare, Suffolk, and Liberty Mutual have each given $1 million to the Boston's Way Home Fund, totaling $3 million to help Mayor Walsh's effort in ending chronic homelessness in the City of Boston. To date, the fund has raised $3.7 million.

"Pine Street Inn is thrilled to partner with Mayor Walsh and the City of Boston on this important initiative to end homelessness in Boston. We appreciate the support of Boston's leading donors towards this $10 million fund. Funds raised will help provide 200 new units of supportive housing for homeless men and women," said Lyndia Downie, President & Executive Director of the Pine Street Inn. "We are also grateful to Modell's Sporting Goods for their generous contribution for every World Series t-shirt sold."

Since its implementation, Boston's Way Home has also resulted in a complete redesign of the way Boston offers services to homeless individuals. Rather than counting on shelter as the solution to the issue, Boston has moved toward a housing-first model, where an individual's entrance into the shelter system is also their entrance to a path toward permanent, stable housing.

Creating new permanent supportive housing is an important component of Boston's Way Home, the City's plan to end chronic homelessness. Permanent supportive housing combines subsidized rental housing with individualized support services so that people with complex issues can receive the assistance they need to stay housed. The services are designed to build independent living skills and to  connect people with services such as community-based health care, help with mental health issues, substance use counseling, and employment services.

By definition, chronically homeless individuals have barriers that create challenges to remaining housed. These barriers can include physical disabilities, substance use disorders, and mental health issues, among others. Without additional assistance, some chronically homeless men and women are not able to maintain their homes.

You can learn more about Boston's Way Home online.