The updated "People's Plaza" will be transformed into an accessible, equitable space for residents with civic spaces, play spaces, and updated public facilities.

Building on his commitment to make public spaces welcoming, accessible and equitable for all, Mayor Martin J. Walsh today announced the renovation concept design of Boston City Hall Plaza. The renovation will transform the Plaza into a civic space for all residents, with universal accessibility, new civic spaces for all to use, increased environmental sustainability, and critical infrastructure improvements that will ensure the Plaza is safe and accessible for all for generations to come.

"Boston's City Hall Plaza is a space visited by thousands of Boston residents each and every day," said Mayor Walsh. "This renovation will turn our seven-acre space into a welcoming, accessible space for all, featuring new civic spaces for events to areas for families to enjoy together. Creating a new People's Plaza will help us achieve our goals of making one of Boston's most-used public spaces better for all residents." 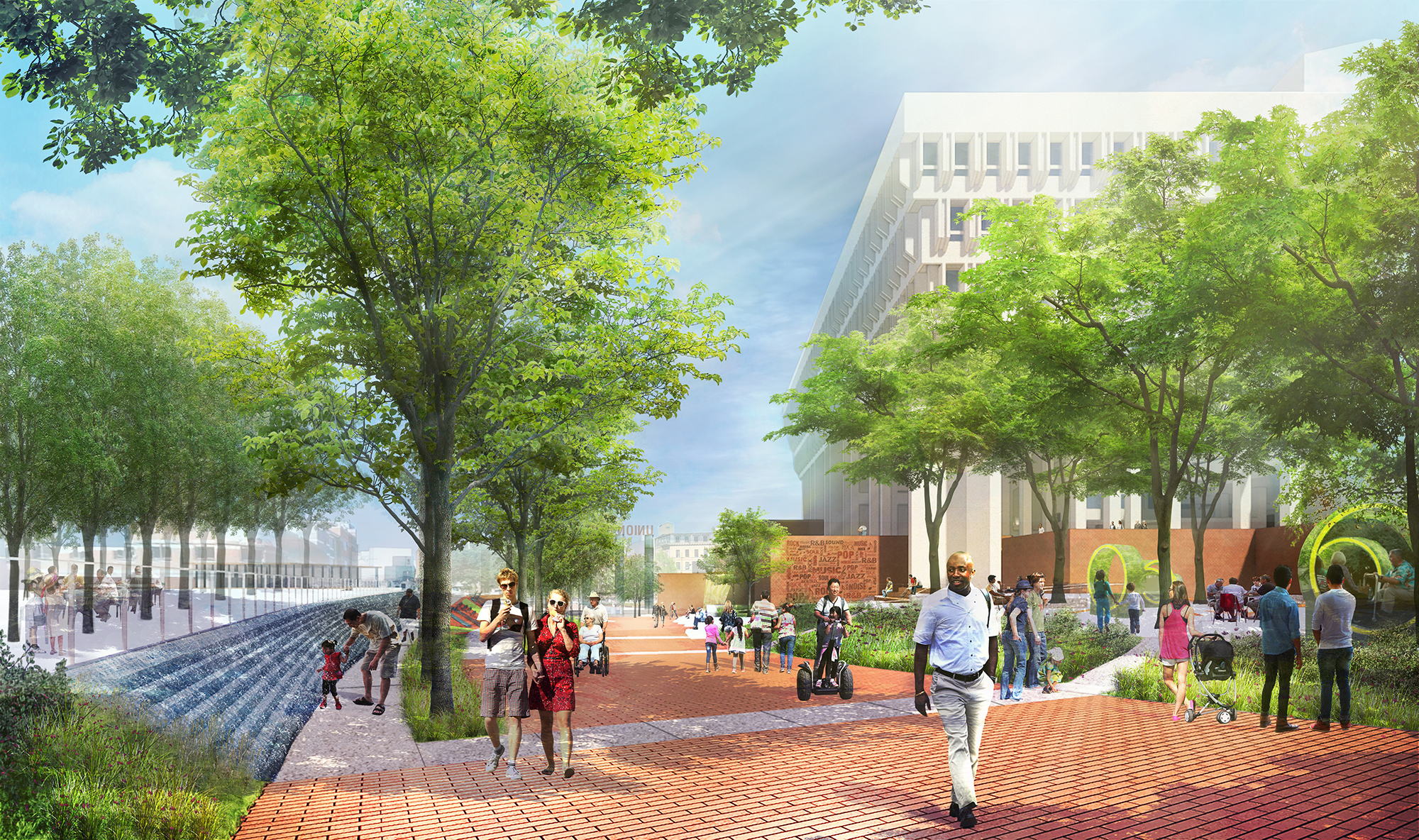 The seven-acre plaza is one of the City's largest civic spaces and for the last 50 years it has hosted events ranging from sports celebrations and rallies, to seasonal cultural festivals. The Plaza's sustainable and forward-thinking renovation will bring Boston's City Hall Plaza up to 21st-century standards, and create a Plaza that is welcoming and accessible for all residents and visitors. The Plaza design is created by Sasaki, a global design firm specializing in urban design.

Phase 1 of the project will deliver updated civic spaces and programming capabilities, as well as add infrastructure that will make the Plaza more sustainable, including connecting Congress and Cambridge Streets with an accessible sloped Promenade activated by 21st century civic amenities like shady seating and gathering areas, a destination play space, public art space and an iconic water feature.

With Boston's renovated City Hall Plaza, this community space will become universally accessible for residents of all abilities. Opening up the Plaza for all will include re-opening the second floor of City Hall Plaza to the public, allowing easier access to the building. This public-facing entrance was closed in 2001, and will open again under the new renovation plan.

Boston City Hall Plaza renovation will right-size one of Boston's largest event spaces, and create civic event spaces that can be used by all Boston residents. The renovation includes creating seven new "plug and play" locations for community groups to utilize, with space for 10,000 - 12,0000 visitors on the main Plaza, and room for a 20,000 - 25,000 person gathering on the entire Plaza.

The new design will also include three smaller event and gathering places, and a new civic building on Congress Street, equipped with a bathroom and other facilities to support public gatherings.

A Model of Sustainability and Resilience

The renovation includes an increase in permeable surfaces that will soak up stormwater, planning ahead for severe weather in downtown Boston. The design also includes 100 new trees, improving the shade, scale and air quality of the Plaza. Fifty lights will be replaced with efficient LED technology, and 22,500 feet of granite and brick paving will be reused or recycled.

As part of the master planning process beginning in early 2015, Mayor Walsh engaged the community through dozens of public meetings and across social media to help crowdsource ideas on how to reimagine the Plaza. As the project has proceeded it has engaged, and will continue to engage, many stakeholders and impacted abutters and neighbors, including the MBTA and the U.S. General Services Administration, which concurrently has been masterplanning their own modern-era structures and neighboring and sites.

Funding for Phase 1 of the Plaza is included in Boston's Capital Budget, announced earlier this year. Of this budget, $70 million in total project costs is designated to complete Phase 1 of the Boston City Hall Plaza renovation.

The $2.78 billion FY20-24 Capital Plan is how the City makes critical investments in the City's capital assets, including schools, roads, bridges, bike lanes, libraries, and more. This year's plan includes renewed public housing in Charlestown, revitalized parks in Dorchester, transportation improvements in Allston-Brighton, school improvements across the city, and fulfills Mayor Walsh's commitment to dedicating over 10 percent of new city funding toward climate resilient projects. This plan ensures the municipal, civic and open space assets that residents cherish in their neighborhoods will remain active and vibrant parts of the community for years to come.

The Plaza design and implementation is led by global design firm Sasaki. The project is managed through the City's Operations Cabinet by the Public Facilities Department in partnership with the Property Management Department and is assisted by owners project manager Skanska USA.

"Boston City Hall Plaza has long been Boston's place to gather, celebrate and make residents' voices heard," said Isabel Zempel, Sasaki landscape principal. "This historic Plaza recently celebrated its 50th anniversary and these updates will bring the Plaza into the modern century with improved infrastructure, sustainability, and public spaces. The Plaza's renovation will honor its original intentions and history, while making it a more accessible place for all."

The current renovation project builds off the foundations of the Boston City Hall and Plaza Master Planning Study: Rethink City Hall. Released by Mayor Walsh in October 2017, the study was led by the City's Public Facilities Department and design teams of Utile and Reed Hilderbrand. The study resulted in a 30-year master plan to address required repairs and to transform the 50-year-old City Hall and Plaza into an innovative, healthy, efficient and civic facility designed to better serve current and future generations of Bostonians and visitors.

Over 600 residents visit Boston City Hall on a daily basis, while 19,500 residents live within a half-mile of the Plaza, in addition to its 18 million annual tourist visitors. This renovation supports Mayor Walsh's commitment to investing in civic spaces throughout Boston, and creating a City Hall that is accessible for all residents.

Previous work by the City to enhance the Plaza include seasonal events like The Patios: presented by Berkshire Bank along with the Boston Garden Development Corp., which reopened on Thursday, May 2 and Boston's free summer lunch program for students on the Plaza, or Boston's now-annual summer "lawn" popup piloted in partnership with the Mayor's Office of New Urban Mechanics.

Part of the City of Boston's Operations Cabinet, the Public Facilities Department supports all City departments in their efforts to improve customer services to Boston's constituencies. The Public Facilities Department oversees all major projects at City-owned buildings and is responsible for managing the programming, planning, design and construction for new buildings and major renovations across all neighborhoods in Boston..

For over sixty years, Sasaki has brought together the best of landscape architecture, planning, urban design, architecture, interior design, civil engineering, graphic design, place branding, and data science to shape the places in which we live. Out of our Boston and Shanghai offices we are defining the contours of place and redefining what's possible along the way. Today, we are a diverse practice of 300 professionals who share a singular passion for creating spaces and places around the world that prove human potential.