Election dropboxes available now across the City of Boston

Voters registered in Boston can use dropboxes around the City to return vote-by-mail applications by October 28 and completed ballots by November 3.

The Boston Election Department today announced dropboxes are now available around the city for Boston residents to vote by mail in the November 3 State Election. Registered voters can submit their vote-by-mail applications by October 28 and completed ballots by November 3 in one of the 17 dropboxes, available 24 hours a day starting today through 8 p.m. on Election Day. Voters may also return their completed ballots at any early voting location during the scheduled voting hours. If residents choose to return their ballots by mail, they must be postmarked by November 3 and received by the Election Department by November 6 to be counted. As a reminder, the last day to register to vote in the November 3 State Election is October 24. 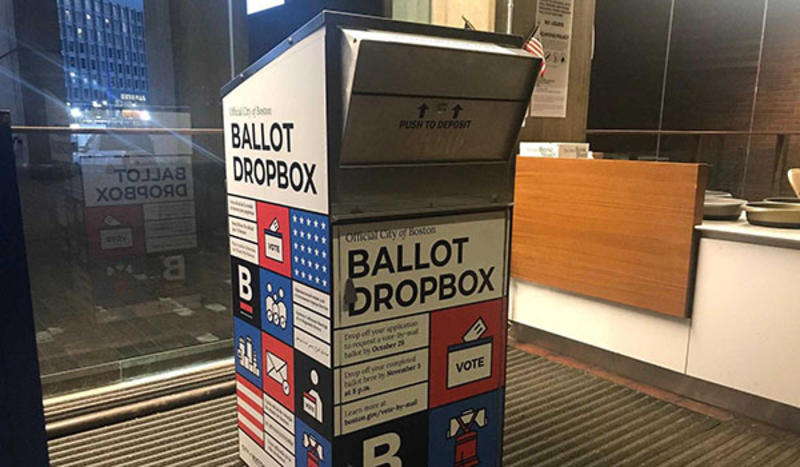 The November 3 State Election includes the following races: Senator in Congress, Representative in Congress, Governor's Councillors, Senator in General Court, Representative in General Court, Register of Probate, and Office of the President of the United States. In addition to the races, there are two ballot questions: Law Proposed by Initiative Petition Motor Vehicle Mechanical Data & Law Proposed by Initiative Petition Ranked-Choice Voting, and two public policy questions in State Representative Districts 11, 15, 17 and 18.

Massachusetts voters can apply for a vote-by-mail ballot online or by completing this form and returning it to the City of Boston's Election Department, via mail, email, fax or by dropping it off in person by appointment at Boston City Hall room 241. Appointments can be made by calling 617-635-8386. Voters can then track their ballot request through trackmyballotMA.com. As of October 13, the Boston Election Department has mailed 112,000 ballots to voters who requested one and will continue to mail ballots for all applications as they arrive, until the application deadline of October 28.

Dropboxes are available 24 hours, seven days a week at the following locations: