The housing is for formerly homeless individuals supported by Boston's Way Home Fund.

Mayor Martin J. Walsh today announced that a proposal by Pine Street Inn and The Community Builders, Inc. to create 202 units of supportive and income-restricted housing at  3368 Washington Street in Jamaica Plain will move forward, following approval from the Boston Planning & Development Agency. The project makes significant progress on Mayor Walsh's commitment to end chronic homelessness in the City of Boston.

"In Boston, we are committed to making sure that every individual has a place to call home and build a better life," said Mayor Martin J. Walsh. "This project is only possible because of the commitment of Pine Street Inn, The Community Builders, and many partners and stakeholders across the City who have joined our call to bring an end to chronic homelessness." 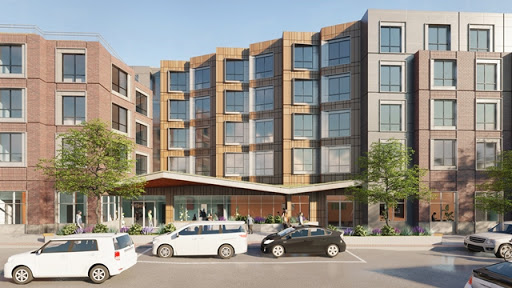 The project includes 140 units of supportive housing designated for individuals receiving services from Pine Street Inn. The remaining 62 income-restricted units will be available to low- and moderate-income households with a range of incomes, from less than 30 percent of area median income (AMI), up to 80 percent of AMI. The existing building, currently owned by Pine Street Inn, houses operations and administrative offices that supports the mission of Pine Street Inn, but no shelter beds or housing units. The offices will be temporarily relocated during construction.

"This project represents a major step forward in our efforts to solve homelessness in Boston," said Pine Street President Lyndia Downie. "The number of units in this building will allow us to scale up our housing to a new level, bringing us close to 1,000 units of supportive housing throughout Boston and in Brookline. With the average age of our tenants at 55, this will provide a safe, secure community as they grow older."

The services will be funded by Boston's Way Home Fund. Launched by Mayor Walsh in January 2018, Boston's Way Home Fund has a set goal of raising $10 million over four years, to be used to create supportive, sustainable, long-term housing for chronically homeless individuals. The $10 million raised from the fund will allow the City to leverage a significant public and private investment.

The project is consistent with the community goals outlined in the BPDA's  PLAN: JP/Rox, approved in 2017, to enhance livability, honor the existing diversity of the neighborhood, use creative design that celebrates the character of the district, and facilitate the creation of more income-restricted housing along the Washington Street corridor.

Earlier this year, Mayor Walsh proposed dedicating $5 million in new hotel tax revenue towards achieving the City's housing goals. In the first year, $4 million of this new funding is dedicated to the development of supportive housing for formerly homeless individuals through the City's Department of Neighborhood Development.